by Toni SoloWestern Bloc central banks and financial and investment corporations are locked into an inflationary dynamic in order to sustain their system’s militarist imperialism. The Bloc’s European and Pacific components offer supportive economic collaboration. In exchange, the US serves as the Bloc’s global enforcer.

The US Treasury, Federal Reserve and corporate financial houses work together boosting dollar zone money supply, devaluing the dollar. Their partners take compensatory steps, intervening in G7 financial markets. They seek to keep their currencies in some kind of sustainable relationship for purposes of mutual trade and finance equilibrium so as to support US budget and current account deficits. 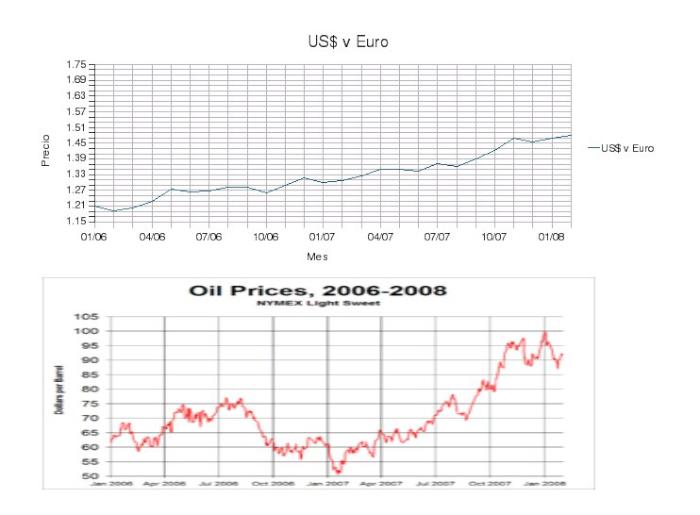 If one looks at the oil price and US$-Euro figures through 2007 up to April 2008, one can see that the trend is even more uniform and continues more sharply. The US$ fell against the Euro from around 1.35 in April 2007 to around 1.57 a year later. During the same period the oil price rose from around US$63 to around US$132. Roughly, an average increase of US$3 for every one cent drop in the value of the dollar. 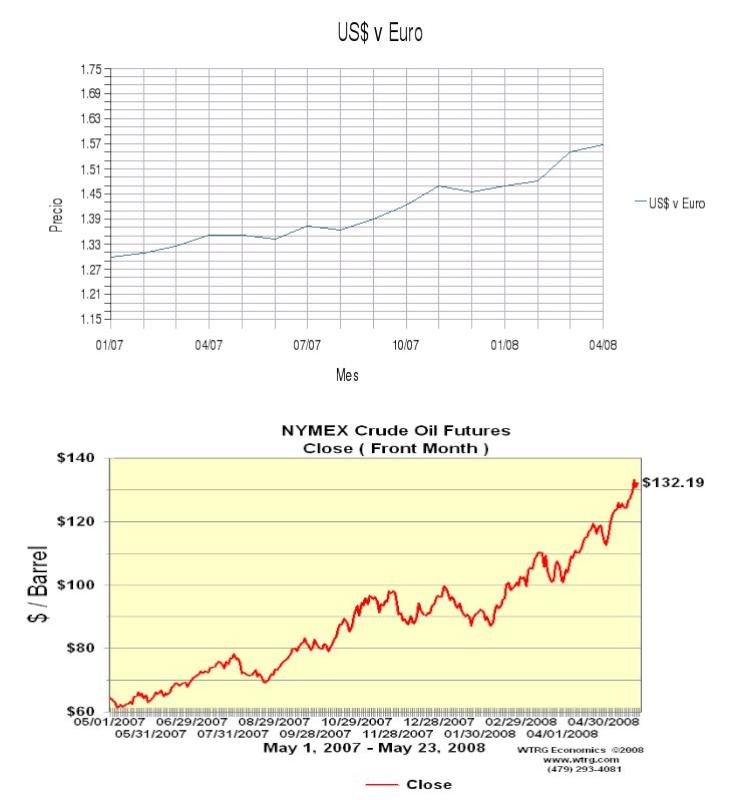 The US Federal Reserve and the US Treasury will carry on increasing the money supply, devaluing the dollar. They do so to fund US government military spending, other components of the US budget deficit and to prevent insolvent banks and financial corporations from going under. The European Central Bank will continue to set its money supply and accompanying policies to sustain recent trends in the Euro’s relationship to the US dollar and bolster its own shaky corporate financial markets.

If there really is a straightforward correlation between the US$-Euro price and the oil price, then December 2008 will see the dollar at around US$1.70 to US$1.75 against the Euro and the oil price at around US$170 to US$180. A strike against Iran or a successful provocation against Venezuela would certainly intensify that 30 month trend. There seems no obvious reason for any significant short-term reversal.

If speculation is a significant component of the oil price why is the US$-Euro price trend so uniformly similar to the oil price trend? The rising oil price tracks the dollar’s decline – not vice versa. Even if speculation is a factor, the price will most likely remain well over US$140-US$150 because the US budget and current account deficits are not going to change much in the short term and may well get worse. As inflation gathers pace over the medium term, interest rates will rise more or less sharply to counter the threat of hyper-inflation.

That may signal the end of the current apparent correlation between the oil price and the decline of the US dollar against the Euro. Whatever way such a medium-term reversal – perhaps by mid-2009 – pans out, one can be absolutely certain the Western Bloc ancien regime will sustain its militarism in support of corporate globalization. Both the US and the European financial systems seem hostage now to inflationary processes in response to the collapse of their long stretched out credit and asset booms.

The European Central Bank prattles on about fighting inflation the same way the US Treasury waffles on about a strong dollar. In fact, it looks as though the Western Bloc finance system is locked into an incestuous fatal inflationary embrace. The US authorities are incapable of dealing with the country’s deficits by ending its wars and the grotesque military spending levels they promote. US allies string along, unwilling or unable to force a correction.

Since the US plutocrat elite cannot give up their wars, the likelihood is they will savage domestic social security and associated programmes to try and cap the budget deficit. Certainly, the corporate plutocrats will not pay. Whoever wins the US Presidency in November, the wars, the militarism, the in-your-face corporate welfare will continue. If they cannot continue boosting the money supply as before to sustain credit and asset bubbles, they will attack the poor and disadvantaged and shrink the middle classes winning compliance by means of the “war on terror” motif.

They will do that domestically and internationally. In Europe, people will be told they cannot have their accustomed pensions and social benefits any more. But funding will continue for NATO commitments, for troops and materiel in Afghanistan, for the UN Israeli-protection forces in Lebanon, for interventions under various pretexts In Africa. Money will be found to support any US intervention against Iran and Syria, against Hizbollah, perhaps against Venezuela.

It may be possible for individuals like Bernanke and Paulson and their mates in the US, Europe and Japan to avoid lurching at the controls of their dollar-euro-yen-vomiting moneyness engines into some dank deflationary slough of despond. It may also be possible they end up knocking back unprecedently enormous swigs of neoliberal hemlock. The impoverished majority will continue to be terrorised, starved and deprived by hypocritical, sadistic Western Bloc politicians, the corporate elites they front for and their regional proxies and puppets.

Their corporate media will continue telling us how well intentioned all those politicians are. But it seems clear from the suspiciously uniform correlation between the US-Euro price and the oil price, those politicians are deliberately fomenting the inflation that is destroying the economies of vulnerable countries around the world. Why are they doing that if not to maintain their ancien regime power and privilege by means of military backed corporate globalization?

They and their corporate media tell us we live in the best of all possible worlds because no other world order is possible. All this suffering and moral debris and economic chaos we’re sorting through… where could it all have come from? The anarchy of the “free market”?

Ever since Bretton Woods, G7 governments have worked together ever more closely planning economic strategy. They rig outcomes so as to protect and promote the interests of their corporate elites. Their corporate propaganda media call this the “free market”. They are talking only to themselves.