Is Chris Trotter good company? Not if we are to choose our friends on their looks.

You might already have seen this. You might not have. Worth a read. Classic Trotter-waving – the sort the left are wary of these days. To the point of forgetting how to do it. And to the extent that one Nat blog called it ‘hate speak.’

We might call them so, but don’t wasps bite for lack of pricks? 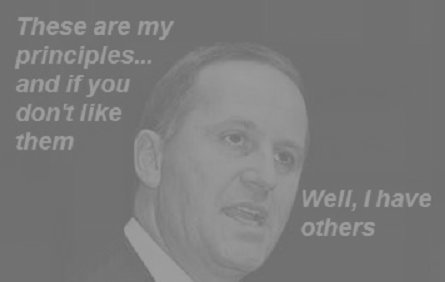 The response has been largely predictably ad hominem – who signs Chris Trotter’s pay-cheques? He’s in the pay of… Or he’s simply a fuckwit, and so on.

What interests me is the confusion the piece has elicited between who the Nats are and the company they are said to keep. That Chris makes the distinction is I think the piece’s singular distinction. I live in John Key’s electorate. And he lives in Remuera. In better company, indeed.

Until the Trotter op-ed piece came along, we had to be getting on with the “bland leading the bland.” A state of affairs which could only have ended with a ‘bland-slide.’

Who, to consider the man is John Key? What do his upper-palatal speech habits, constricted, tell us about him? like the boy we used to feel sorry for at playcentre? And Bill English, whose transcripts show he barely speaks it. And Lockwood – I used to know his son – Lockjaw? Well, tongues are wagging but jaws are barely moving.

There’s a faint tickle on the line, which is terrifying and comical when one knows one is at sea. With heavy weather or extreme events certainly approaching. Like finding ocean diminished to rockpool. And, canst thou draw out a shrimp with an hook?

So you’re thinking of voting for the Nats? After nine years of the same old faces, you think it’s time for a change?

Well, you’re not alone. According to the opinion polls, there are about 350,000 people out there who are thinking what you’re thinking.

But before you – the 15 per cent of the electorate contemplating a lurch to the right – throw your weight behind the 35 per cent of New Zealanders who make up National’s core vote (which will then, with 50 per cent, and wielding unbridled parliamentary power, be free to govern alone for three long years), I would ask you to take a closer look at the people you will be joining.

THE COCKIES: Backbone of the nation; earners of our overseas funds; selfish; insular; and possessed of an indefatigable sense of moral superiority over everyone whose front door looks out upon a street instead of a paddock.

These are the people who, heedless of the enormous biosecurity implications, illegally released the rabbit-killing calicivirus into New Zealand – and then laughed at the efforts of the authorities to hunt down the perpetrators.

The people who, when asked to contribute to the cost of scientific research into how we as a nation might control the amount of methane released into the atmosphere by our cows and sheep, refused point-blank to contribute, branded the levy a “Fart Tax”, and got away with it.

The people who have aggressively resisted every government effort to secure legally protected rights of way across the countryside, so that all New Zealanders might enjoy the beauty of our wild open spaces, and who, once again, have got away with it.

The people whose dairy herds befoul our rivers and streams. The people who refuse to pay for the pollution they cause. The people who are bending all their powers towards securing control of our nation’s water – even as they make it unfit for our children to drink or swim in.

These are the people you will be supporting when you vote National.

You will also be supporting:

THE RICH: Creators of wealth; makers of jobs; robbers of rights; bastardisers of culture; selfish; arrogant; and possessed of an indefatigable sense of moral superiority over everyone whose income is less than $100,000 per annum.

These are the people who, with the Employment Contracts Act, stripped from hundreds of thousands of working-class New Zealanders the legal rights they had enjoyed for nearly one hundred years.

The people who pocketed the accommodation supplement (kindly supplied by their political representatives) even as their tenants’ children went cold and hungry, and the diseases of poverty, long banished from New Zealand society, made a deadly reappearance.

The people who begrudge every cent of tax they are asked to contribute. The people who care nothing for the cultural wealth of our nation being fairly distributed. The people who regard education principally as a means of preserving the advantages of their class. The people who think our health system wastes far too much money on all the stupid, lazy and poor people cluttering it up.

These people, too, you will be supporting when you vote National. And then there are:

THE REACTIONARIES: Defenders of the faith; upholders of decent family values; sadistic; bigoted; deranged hankerers after a world that – thankfully – has long since passed away.

Yes, these are the people you will be joining when you make the big switch. The people who have opposed every single progressive reform that New Zealand has ever undertaken – yes, every single one.

Of course, no one can stop you joining them.

But, please, before you vote, ask yourself: “Is this the company I want to keep?”

Wed Aug 6 , 2008
Gutsy Poets of New Zealand Wake up! Arise! Rebel! Everyone jostling for a space A speaking place Alights on poetry; But the poets presently declaim in nonsense verse, lots of stuff that makes no sense – no protest- Row on row Manhire asterisks would Make more sense; Give up brother […]