[Most people who read only the NZ Herald for their news would understand the conflict going on in South West Asia largely only from articles faithfully cut’n’pasted from the Pro-war media bumholes of The Telegraph Group Ltd and The Associated Press (or AP).

Don’t look for any positive news regarding Iran or Venesuela – because you won’t find it.

If you live in Christchurch, that World section of The Press that you are holding – is mostly slapped together from articles reprinted from the Pro-war chud-funnel that is The (London) Times – where (with one notable exception published back in January) Israel can do no wrong as it continues to wipe Palestine off the Map and con the world into bombing (and maybe even nuking) the sovereign state of Iran.

Its no wonder then that New Zealand has the collective geopolitical awareness of a squashed pie.

By any measure, today’s presidential election in Afghanistan is a travesty. The poll takes place under conditions of a continuing foreign military occupation to prop up a puppet government that is notorious for its human rights abuses, corruption and failure to provide for the basic needs of the vast majority of the population. The incumbent president and leading contender, Hamid Karzai, who was installed in office in 2002 by the US, is widely despised by the Afghan people. Excluded from the field of major candidates is anyone who opposes the US-NATO occupation, despite the fact that it is opposed by a large majority of the population, particularly in the southern Pashtun region, where Taliban influence is strong. Karzai’s leading rival and former foreign minister, Abdullah Abdullah, was previously a spokesman for the Northern Alliance militias that helped the US topple the Taliban.

Despite the boosting of US and NATO troop numbers, the Taliban and its allies hold sway over large areas of eastern and southern Afghanistan and are calling for an election boycott. In at least 60 percent of the country, polling stations are at risk of attack. Some 440 out of 7,000 stations will not be opened at all as they cannot be protected. Around 100,000 foreign troops and 180,000 Afghan government army and police personnel are being deployed to secure the vote.

The Taliban and other insurgent groups, such as Gulbuddin Hekmatyar’s Hezb-e-Islami movement, are intensifying their efforts to drive US and NATO troops from the country and overthrow the pro-US government. All of the leading presidential candidates are promising peace talks and even power-sharing with the insurgents, but, with their support growing, the Taliban and Hekmatyar have stated that they will not enter into talks under conditions of foreign occupation.

To prove their reach, the insurgents have carried out high-profile attacks over the past week against the nerve centres of the occupation. The NATO headquarters and the nearby US embassy in Kabul were targeted by a massive vehicle bomb on August 15. On Tuesday, Taliban fighters managed to position mortars within range and fire shells into the grounds of the heavily guarded presidential palace in the heart of the capital.

While the US will undoubtedly blame Taliban violence, eight years of indiscriminate air attacks, ground assaults and thousands of arbitrary detentions have generated deep-seated hostility to the occupation and its Afghan collaborators.

The US invasion has essentially placed back in power the Northern Alliance—the grouping of ethnic-based warlords who were overthrown by the Taliban in 1996. The only new faces are a collection of grasping émigré businessmen who have returned from the US and Europe to profiteer from multibillion-dollar “reconstruction” and “aid” projects.

In the central and northern provinces, the Tajik, Uzbek and Hazari warlords will largely dictate the outcome. Karzai is expected to be the main beneficiary. His two vice-presidential candidates and other supporters are prominent Northern Alliance members, and he is backed by a number of anti-Taliban Pashtun powerbrokers in the south—including his brother, Ahmed Wali Karzai, who is accused of organising much of the opium and heroin trade out of Kandahar province. 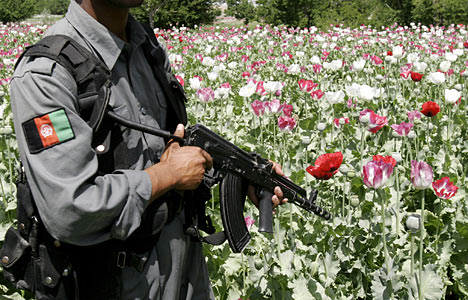 Even the Obama administration has had to admit that the result will be tarnished by wholesale ballot-rigging, primarily by electoral officials appointed by Karzai. It is believed that there at least 3 million duplicate or fraudulent voter registration cards in circulation, out of a total of 17 million. The BBC revealed this week that its undercover journalists had no difficulty arranging to buy 1,000 cards—for $10 each—on the streets of Kabul.

If Karzai does not win outright, he will be forced into a run-off with the second highest vote-getter. The most recent opinion poll conducted by the US International Republican Institute gave Karzai 44 percent against 26 percent for his closest rival, Abdullah Abdullah. Two other prominent candidates, Ashraf Ghani and Ramazan Bashardost, each polled less than 10 percent.

The fraudulent character of the poll is underscored by the Obama administration’s overt meddling. Despite having loyally served the US-led occupation, Karzai has faced increasing criticism in the US over his administration’s corruption and lack of public support. Karzai’s own limited criticisms of air strikes have rankled the US military. Despite Washington’s claim to neutrality, US ambassador Karl Eikenberry appeared publicly earlier this year alongside two of Karzai’s leading rivals.

The White House also signaled its displeasure towards Karzai by publicly condemning the return to Afghanistan last Saturday of ethnic Uzbek strongman Abdul Rashid Dostum—one of the brutal warlords in the pre-Taliban period and a key US ally during the 2001 invasion. Last year, Dostum was pressured to go into voluntary exile in Turkey after he murdered a political opponent. Having returned at Karzai’s invitation, Dostum immediately called for a vote for the incumbent president.

The US embassy issued a hypocritical statement declaring that Dostum faced “questions of his culpability for massive human rights violations.” The charge referred not to his war crimes in the 1990s, but to the mass killing of Taliban prisoners captured by his Northern Alliance fighters in Kunduz in 2001. No mention was made of the involvement of CIA operatives and US Special Forces in a similar massacre at Mazar-i-Sharif. (See: “A cover-up of US massacre at Mazar-i-Sharif”)

The US and its allies appear to be aiming at preventing Karzai from winning outright in the first round. The British ambassador in Afghanistan, Mark Sedwell, told the Australian Broadcasting Corporation on Tuesday night that a second round of voting would help “convince people the process was real.”

Even if Karzai does win the poll, his position is hardly secure. David Kilcullen, a leading advisor to US military commanders, described Karzai in the harshest language earlier this month and ominously compared him with South Vietnamese President Ngo Dinh Diem, whom the Kennedy administration had assassinated in 1963.

Washington is quietly pushing a plan to strip the president of many of his powers by installing an unelected “chief executive officer” to take over the day-to-day operations of the Afghan government. Among the possible candidates is Ashraf Ghani, who has worked for the foreign policy wing of the Brookings Institute, the World Bank and the United Nations.

Once the election is out of the way, the Obama administration and the Pentagon will push ahead with plans for a major escalation of the war. Tens of thousands of additional US troops have been put in place, and US commanders are preparing to call for many more to be sent to kill and be killed in this brutal neo-colonial war.

Fri Aug 21 , 2009
Davidson Loehr 7 November 2004 First UU Church of Austin This sermon by Rev. Dr. Davidson Loehr, originally delivered on November 7, 2004, has recently been the subject of discussion on Air America’s “Morning Sedition” as well as in other media outlets. [Fascism is the merger of Government and Big […]