It’s been one lie after another in the US media about the Israeli attack on the Gaza-bound relief flotilla.

No matter that the Israeli media views the whole incident as a debacle for Israel,

in this country the Israel-can-do-no-wrong crowd is on overdrive defending the operation.

As usual, facts don’t matter to them. 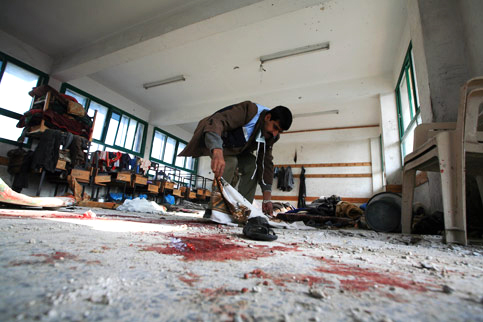 The first thing you need to know about the Gaza flotilla disaster is that the intention of the activists on board the ships was to break the Israeli blockade. Delivering the embargoed goods was incidental.

In other words, the activists were like the civil rights demonstrators who sat down at segregated lunch counters throughout the South and refused to leave until they were served. Their goal was not really to get breakfast. It was to end segregation.

That fact is so obvious that it is hard to believe that the “pro-Israel” lobby is using it as an indictment.

Of course the goal of the flotilla was to break the blockade. Of course Martin Luther King provoked the civil authorities of the South to break segregation.

Of course the Solidarity movement used workers’ rights as a pretext to break Soviet-imposed Communism.

The bottom line is that the men and women of the flotilla had every right to attempt to destroy an illegal blockade that Israel had no legal standing to impose and which was designed to inflict collective punishment on the people of Gaza.

(There is no truth to the story that Israel would have delivered the goods on the ships to Gaza if asked; the Israelis never made that offer and, judging by years of precedent, would have blocked any delivery.)

As for the Israeli argument that its soldiers were attacked, that is ridiculous.

Israeli commandos were ordered to board a civilian ship in international waters and the government that sent them claims that the resisting passengers attacked them without provocation.

This is like a carjacker complaining to the police that the driver bashed him with a crowbar that was under the seat.

Neither carjackers nor hijackers should expect their victims to acquiesce peacefully.

Thu Jul 29 , 2010
The thousands of US officer reports from Afghanistan appearing on Wikileaks yesterday show how technology can imperil a military’s secrecy and operations. But there is another side to that relationship. The technologies used by militaries to kill by remote control, which are becoming increasingly sophisticated and prevalent, are transforming warfare. […]