Nearly three years after the Icelandic economy imploded, the country appears to be recovering,

and some believe its approach may offer a possible solution to Europe’s debt problems.

Iceland does not seem like a country in the grip of a crisis.

On my first day the sun was shining brightly and out in Reykjavik’s main shopping area the shops and boutiques,

the cafes and restaurants were busy.

Indeed, Reykjavik seemed pretty much like any other prosperous northern European city.

Yet Iceland was hit hardest by the credit crunch in 2008.

that plagues so many economies.

That is because when Iceland’s banks went spectacularly bust,

instead of pouring in billions of taxpayers’ money to shore them up,

Iceland just closed them down.

Their debts were so huge that, in truth, the country had little choice.

Nevertheless, it was a radical strategy.

Iceland effectively said “stuff you” to the banks’ creditors.

Foreign debts were written off – including $8bn (£4.9bn) of deposits from savers in the UK and Holland.

“Bankrupting your way to recovery,” it has been called.

Iceland’s president is certainly convinced the strategy is working.

when I meet him in his stark mansion on a forbidding spit of land jutting out into the bay outside Reykjavik.

and with a lower public sector deficit.

Unemployment is falling and Iceland has just raised a billion dollars at favourable rates on the international market.

But Iceland’s approach is about much more than just getting its banking sector in order, the president tells me.

It is also about affirming the will of the people over the financial institutions. 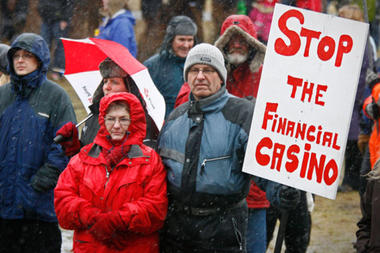 Mon Aug 1 , 2011
The New Zealand Tabloid published the results of its own poll on its own front page today stating that about two thirds of those polled – wanted our SAS home from its wet work in Afghanistan. The structure of the poll itself came off looking slightly disingenuous because it claimed […]