Fascinating blog revises the “official” story, and it has as much to do with America as it does with Germany or Britain!

The True Cause of World War 1

History books record that World War I started when the nations went to war to avenge the assassination of the Archduke Francis Ferdinand, the heir to the Habsburg throne, on June 28, 1914.
This is the typical explanation. But the “revisionist historian” knows just what caused and what the purpose was of the conflagration of World War I.
Up until America’s entry into this war, the American people had followed the wise advice of President George Washington given in his farewell address, delivered to the nation on September 17, 1796. President Washington said: “It is our true policy to steer clear of permanent alliance with any portion of the foreign world…. Why, by interweaving our destiny with that of any part of Europe, entangle our peace and prosperity in the toils of European ambition, rivalship, interest, humour or caprice?’
President Washington attempted to warn the American people about getting embroiled in the affairs of Europe. But in 1914, it was not to be. There were those who were secretly planning America’s involvement in World War I whether the American people wanted it or not.

The Plan to Involve America in World War 1
The pressure to involve the American government started in 1909, long before the actual assassination of the Archduke.
Norman Dodd, former director of the Committee to Investigate Tax Exempt Foundations of the U.S. House of Representatives, testified that the Committee was invited to study the minutes of the Carnegie Endowment for International Peace as part of the Committee’s investigation. The Committee stated: “The trustees of the Foundation brought up a single question. If it is desirable to alter the life of an entire people, is there any means more efficient than war…. They discussed this question… for a year and came up with an answer: There are no known means more efficient than war, assuming the objective is altering the life of an entire people. That leads them to a question: How do we involve the United States in a war. This is in 1909.”
So the decision was made to involve the United States in a war so that the “life of the entire people could be altered.” This was the conclusion of a foundation supposedly committed to “peace.”
The method by which the United States was drawn into the war started on October 25, 1911, when Winston Churchill was appointed the First Lord of the Admiralty in England.
Winston Churchill is an interesting individual, as he later came to the conclusion that there was indeed a master conspiracy at work in the major events of the world, when he wrote the following in 1920: “From the days of Spartacus—Weishaupt to those of Karl Marx, to those of Trotsky (Russia)… this world-wide conspiracy for the overthrow of civilization… has been steadily growing.”
The second key appointment made during the pre-war period was the appointment of Franklin Delano Roosevelt as Assistant Secretary of the Navy by President Woodrow Wilson.
Roosevelt is also on record as concluding that there was a conspiracy, at least in the United States. He once wrote to Colonel Edward Mandell House: “The real truth of the matter is, as you and I know, that a financial element in the larger centers has owned the government ever since the days of Andrew Jackson, and I am not wholly excepting the administration of W.W. (Woodrow Wilson.) The country is going through a repetition of Jackson’s fight with the Bank of the United States—only on a far bigger and broader basis.” 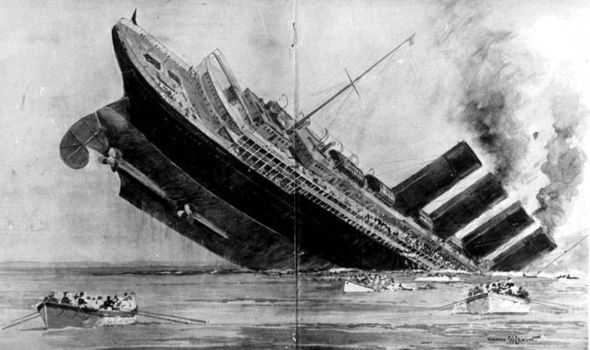 The Sinking of the Lusitania
The next step in the maneuvering of the United States into the war came when the Cunard Lines, owner of the ocean liner, the Lusitania, turned the ship over to the First Lord of the Admiralty, Winston Churchill. It now became a ship of the English Navy and was under the control of the English government.
The ship was sent to New York City where it was loaded with six million rounds of ammunition, owned by J.P. Morgan & Co., to be sold to England and France to aid in their war against Germany.
It was known that the very wealthy were interested in involving the American government in that war, and Secretary of State William Jennings Bryan was one who made note of this. “As Secretary [Bryan] had anticipated, the large banking interests were deeply interested in the World War because of wide opportunities for large profits. On August 3, 1914, even before the actual clash of arms, the French firm of Rothschild Freres cabled to Morgan and Company in New York suggesting the flotation of a loan of $100,000,000, a substantial part of which was to be left in the United States, to pay for French purchases of American goods.”
England broke the German war code on December 14, 1914, so that “By the end of January, 1915, [British Intelligence was] able to advise the Admiralty of the departure of each U-boat as it left for patrol….”
This meant that the First Lord of the Admiralty, Winston Churchill, knew where every U-boat was in the vicinity of the English Channel that separated England and France.
The ocean liner was set to sail to England already at war with Germany. The German government had placed advertisements in the New York newspapers warning the American people considering whether or not to sail with the ship to England that they would be sailing into a war zone, and that the liner could be sunk.
Secretary Bryan promised that “he would endeavor to persuade the President (Woodrow Wilson) publicly to warn the Americans not to travel [aboard the Lusitania]. No such warning was issued by the President, but there can be no doubt that President Wilson was told of the character of the cargo destined for the Lusitania. He did nothing… .”
Even though Wilson proclaimed America’s neutrality in the European War, in accordance with the prior admonitions of George Washington, his government was secretly plotting to involve the American people by having the Lusitania sunk. This was made public in the book The Intimate Papers of Colonel House, written by a supporter of the Colonel, who recorded a conversation between Colonel House and Sir Edward Grey of England, the Foreign Secretary of England:
Grey: What will America do if the Germans sink an ocean liner with American passengers on board?
House: I believe that a flame of indignation would sweep the United States and that by itself would be sufficient to carry us into the war.
On May 7, 1915, the Lusitania was sunk off the coast of County Cork, Ireland by a U-boat after it had slowed to await the arrival of the English escort vessel, the Juno, which was intended to escort it into the English port. The First Lord of the Admiralty, Winston Churchill, issued orders that the Juno was to return to port, and the Lusitania sat alone in the channel. Because Churchill knew of the presence of three U-boats in the vicinity, it is reasonable to presume that he had planned for the Lusitania to be sunk, and it was. 1201 people lost their lives in the sinking.
This sinking has been described by Colin Simpson, the author of a book entitled The Lusitania, as “the foulest act of wilful murder ever committed on the seas.”
But the event was not enough to enable President Wilson to declare war against the German government, and the conspirators changed tactics. They would use other means to get the American people involved in the war, as the “flame of indignation” did not sweep the United States as had been planned.
Robert Lansing, the Assistant Secretary of State, is on record as stating: “We must educate the public gradually — draw it along to the point where it will be willing to go into the war.”
After the sinking of the Lusitania, two inquiries were held, one by the English government, in June, 1915, and one by the American government in 1918. Mr. Simpson has written that “Both sets of archives… contain meager information. There are substantial differences of fact in the two sets of papers and in many cases it is difficult to accept that the files relate to the same vessel.”
But in both inquiries, the conclusions were the same: torpedoes and not exploding ammunition sank the Lusitania, because there was no ammunition aboard. The cover-up was now official.
But there have been critics of these inquiries. One was, of course, the book written by Colin Simpson, who did the research necessary to write his book in the original minutes of the two inquiries.
The Los Angeles Times reviewed Mr. Simpson’s book and concluded: “The Lusitania proves beyond a reasonable doubt that the British government connived at the sinking of the passenger ship in order to lure America into World War I. The Germans, whose torpedo struck the liner, were the unwitting accomplices or victims of a plot probably concocted by Winston Churchill.”
President Wilson was seeking re-election in 1916. He campaigned on his record of “keeping us out of the War” during his first term of office from 1912 to 1916.

Thanks to Jennifer at theConTrail.com for discovering this blog!

Facebook wants people to invite its cameras into their homes

Tue Oct 9 , 2018
Cameras, cameras, everywhere: They’re all jumping aboard the Big Brother bandwagon, This one is the most controversial yet!   Michael Liedtke and Barbara Ortutay, AP Technology Writers, Associated Press •October 9, 2018 SAN FRANCISCO (AP) — Facebook is launching the first electronic device to bear its brand, a screen and camera-equipped […]