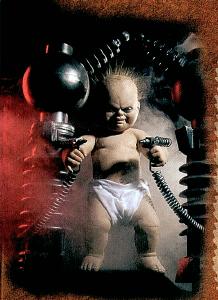 Both George Bush and Dick Cheney have emphatically proclaimed the American Way of Life as “non-negotiable.” As hard as it may be for the feeble-minded, deluded, conscienceless, or hopelessly addicted to grasp, Mother Nature and billions of human beings are going to force us to the bargaining table. We can kick, scream, stomp our feet, and hold our breath all we want, but our abhorrent mode of existence is going down.

Aside from the fact that they are utterly unsustainable, why is it such a certainty that American Capitalism, consumerism, militarism, and the myriad associated ills that exist to maintain our obscene lifestyle are a house of cards on the verge of collapse?

Quite simple really. With our overwhelming wealth, power, and military firepower, the United States exercises virtual hegemony over the globe. Granted our influence is waning, but we still call most of the shots. As lord and master of the planet, we are doing a miserable job. Emotionally infantile, we have a sense of entitlement that dwarfs Mt. Everest, we are absolutely certain that we are center of the universe, and we throw incredibly destructive tantrums when we don’t get our way, the American Way that is. We are massive toddlers inflicting our version of the “terrible twos” on the world. Were we not wielding such a massive cudgel, our childishness would be laughable.

Under our “good stewardship,” as our current unitary executive loves to call it, the world is careening down the highway at break-neck speed with an infant at the wheel. And if he crashes before an adult can wrest control from him, we’re looking at a major accident with multiple fatalities. We’ve already pushed the world to the verge of economic collapse, the brink of starvation, the initiation of perpetual war, and impending environmental disaster.

Collectively, we act without conscience or concern for the consequences of our actions. The American Way of Life is “all about me and to hell with everyone else.” We revere narcissism, hyper-individualism, greed, wealth, and status as virtues. Becoming a rich, acquisitive careerist by clawing one’s way to the top of the hierarchy through deceit, betrayal, sycophancy, and whoring oneself out in any way imaginable is enshrined as the penultimate achievement in our sewer of a society.

Contrary to the common misconception, the psychological umbilical cord between our mothers and us is severed at a very young age. Nearly the instant we are able to intellectualize we drop mom like a hot potato and become psychically parasitic, our hosts being those ubiquitous devices known as televisions.

When we were in the womb, our mothers’ rich and nurturing blood flowed through our veins, quite literally providing the essence of our physical being. Fast forward a few years. Our psychic umbilical cord detaches from mom and is immediately seduced to fuse itself to that seemingly innocent yet deeply nefarious pusher of mind crack. In stark contrast to our mother’s wholesome blood that nourished us in a way that ensured healthy physical growth, the rancid filth we derive from television cripples and malforms our psyches in profound and perverse ways.

Planned or not, television has become the power elite’s primary weapon in the daily propaganda war they wage to maintain the American Way of Life, furiously beating down any and all challengers. Calling the content of television “programming” is quite fitting. Through our addiction to pixilated images, the lords and masters of American Capitalism manipulate us into participating in the banality of evil without giving it a first thought, let alone a second one.

Much like the Leatherman, TV is an incredibly multi-faceted tool that enables the ruling elites in the US to hone the masses into the infantilized little sociopaths they need to man the bulwarks of American Capitalism, spreading our “corporatocracy and freedom from the pangs of conscience and critical thought” the world over.

If you don’t know the stats, you’ve been somnambulating, but here are a few:

1. We are 5% of the population and siphon off 30% of the world’s goodies, while 35,000 people starve to death each day.
2. We, the land of the free, exercise a higher degree of social control than even those “tyrants” in China and Russia. We have the world’s largest prison population, many of whom are non-violent drug offenders. And then there’s our clever way of imposing our agenda in Latin America via the “War on Drugs…..”
3. We lost about 500,000 people in WWII while Russia lost over 20 million yet we arrogantly boast that WE “defeated fascism.” And that’s not to mention the fact that many of our beloved capitalists, including members of the Bush dynasty, supported Hitler until they faced potential criminal prosecution.
4. We have staged coups and incursions the world over (our interventions are far too numerous to document in this dispatch, but visit this site to familiarize yourself with the reach of our malevolent imperialist tentacles: https://www.thirdworldtraveler.com/Foreign_Policy/US_ForeignPolicy.html )
5. Ironically, we justify our trillion dollar a year military budget by waging wars against nations with phantom weapons of mass destruction–while we are the only nation to have deployed such weapons. Ask Japan about the devastating impact.
6. We pour billions of dollars into the support of those miserable Zionist squatters in Palestine because a very small percentage of our population (which has very deep pockets, a strangle-hold on mass media, and a juggernaut lobbying organization) has many of us brain-washed into believing “poor little Israel” is fighting for its very existence—when the reality is that it has a more formidable military than all of its alleged threats combined and has ruthlessly brutalized the Palestinians like the terrorist state that it is.
7. We slaughtered over two million Vietnamese in an attempt to keep the world safe for capitalism and are poised to consider putting one of the perpetrators in the White House.
8. We have murdered untold millions of Iraqis since the Gulf War via invasion, brutal economic sanctions, fomenting civil war and chaos, illegal occupation, and destruction of infrastructure. And neither of the performers in the theater of the absurd we call a “presidential election” has promised to bring an immediate end to this moral and legal abomination. If we enforced the Nuremberg Laws that WE crafted, all responsible would be hanged, including whoever replaces Bush and perpetuates this genocide.

And that is just a brief and very incomplete summary of the evil that we openly or tacitly support simply by being Americans, even if our role is very banal or pedestrian. As cogs in a murderous machine built on stolen land and primarily with the blood, sweat and tears of slaves and poor immigrants, we all bear a degree of responsibility for the atrocities we commit. Even those who choose to remain and fight the system from within are still buttressing the American Way to some extent.

How do we sleep at night? Some of us don’t and some of us have pharmaceutical help. But by and large our television programming has given us the “gifts” of a pathologically muted conscience, heavy doses of blissful ignorance, and the attention span of anencephalic sheep.

Desensitized to violence, mentally malnourished by a steady diet of brain candy, conditioned to putting our brains in neutral and letting the “idiot box” do our thinking for us, psychologically beaten down by constant reminders that the subjects of our idolatry are “better than us,” and manipulated into believing that the spiritually vacuous American Dream is more than just a mirage that keeps the working class trudging through the desert of perpetual corporatism, many of us remain true believers, prefer wage slavery to sleeping under a bridge, or recognize that (despite the shop-worn and inane rhetoric about freedom and democracy) the system has harsh consequences for those who don’t at least ostensibly toe the line.

Regardless of our individual level of consciousness or level of participation in this criminal enterprise known in some circles as the American Empire, we Americans as a collective are an intriguingly repulsive synthesis of excessively spoiled brats and sociopaths. We want what we want when we want it, consequences be damned. We have the means to get what we desire, virtually no capacity to delay gratification, and the ability to punish those who stand in our way. To top it off, we don’t let trivialities like conscience restrain us. We are a nation of sociobrats.

Individually, we can change. Many have transformed and many more will. But there are some pretty long odds against enough of us shedding our grotesquely malformed psyches and evolving beyond our state of infantilization before the American Way of Life collapses under the weight of its own excrement or is eradicated by its hordes of victims.

Jason Miller is the associate editor of Cyrano’s Journal Online.

Poverty: 260m driven into hunger by push for biofuel - ActionAid

Thu Jul 3 , 2008
Ashley Seager The Guardian, https://www.guardian.co.uk/environment/2008/jul/03/biofuels.food The G8’s push for greater biofuel use has been a significant factor in driving 760 million people into food insecurity and putting them at risk of hunger in the past two years, ActionAid says today. Released before next week’s G8 summit in Hokkaido, Japan, the […]