The War on Iran.
by Michel Chossudovsky
Global Research, April 1, 2007

The US has completed major military maneuvers in the Persian Gulf within a short distance of Iranian territorial waters. This naval deployment is meant to “send a warning to Tehran” following the adoption of United Nations Security Council Resolution 1747, which imposes major economic sanctions on Iran in retaliation for its non-compliance with US demands regarding its uranium enrichment program.

The US war games off the Iranian coastline involved the participation of two aircraft carriers, the USS John Stennis carrier group and the USS Eisenhower with some 10,000 navy personnel and more than 100 warplanes. The USS John C. Stennis aircraft carrier group, which is part of the US Fifth Fleet, entered the Persian Gulf on March 27, escorted by guided-missile cruiser USS Antietam (CG 54). (see https://www.navy.mil/).

” This marks the first time the Stennis and Eisenhower strike groups have operated together in a joint exercise while deployed to 5th Fleet. This exercise demonstrates the importance the ability for both strike groups to plan and conduct dual task force operations as part of the Navy’s commitment to maintaining maritime security and stability in the region.”

The war games were conducted at a time of diplomatic tension and confrontation following the arrest by Iran of 15 British Royal navy personnel, who were allegedly patrolling inside Iranian territorial waters.

The British government, supported by media disinformation, has been using this incident, with a view to creating a situation of confrontation with Iran.

The maneuvers coupled with British threats in relation to the unfolding “Iran Hostage Crisis” constitute an act of provocation on the part of the Anglo-American military alliance.

According to the US Navy, this latest round of US military maneuvers conducted in late March was on a significantly larger scale when compared to previous deployments. Press reports suggest that these maneuvers constituted the largest deployment of US naval power since the March 2003 invasion of Iraq.

Almost simultaneously, Iran was also conducting large scale naval exercises in the Persian Gulf, to the extent that both the US and Iran are on a war footing.

A recent Russian press report, quoting intelligence sources, has sounded an alarm. According to a RIA-Novosti report, quoted by the European and Israeli press (Jerusalem Post), the US is planning to initiate air attacks on Iran under ” Operation Bite”, starting on Good friday, April 6th, targeting both military and civilian sites, including Iran’s air defense system:.

“The latest military intelligence data point to heightened U.S. military preparations for both an air and ground operation against Iran,” the official said, adding that the Pentagon has probably not yet made a final decision as to when an attack will be launched.

He said the Pentagon is looking for a way to deliver a strike against Iran “that would enable the Americans to bring the country to its knees at minimal cost.”

He also said the U.S. Naval presence in the Persian Gulf has for the first time in the past four years reached the level that existed shortly before the invasion of Iraq in March 2003.

Col.-Gen. Leonid Ivashov, vice president of the Academy of Geopolitical Sciences, said last week that the Pentagon is planning to deliver a massive air strike on Iran’s military infrastructure in the near future”

While the Russian report must be acknowledged, there is, however, no corroborating evidence, which would enable us to pinpoint the exact timeline of a military attack on Iran.

Moreover, there are several important factors which suggest, from a military organizational standpoint, that unless we are dealing with a case of sheer political madness, the Pentagon is not ready to launch an attack on Iran.

Several key military appointments were made in the course of the month of March. Of significance, Admiral. William J. Fallon, was appointed Commander of U.S. Central Command (CENTCOM) on March 16 by Defense Secretary Robert M. Gates. It is unlikely that Admiral Fallon would activate a military operation directed against Iran, within a few weeks following his appointment as CENTCOM Commander.

Meanwhile, another major military appointment was implemented, which has a direct bearing on Iran war preparations. Admiral Timothy J. Keating Commander of US NORTHCOM was appointed on March 26, to head US Pacific Command, which includes both the 5th and the 7th fleets. The 7th Fleet Pacific Command is the largest U.S. combatant command. Keating, who takes over from Admiral Fallon is also an unbending supporter of the “war on terrorism”. Pacific Command would be playing a key role in the context of a military operation directed against Iran.
https://www.pacom.mil/about/pacom.shtml

Of significance, Admiral Keating was also involved in the 2003 attack on Iraq as commander of US Naval Forces Central Command and the Fifth Fleet.

Admiral Fallon is fully compliant with the Bush administration’s war plans in relation to Iran. He replaces Gen. John P. Abizaid, who was pushed into retirement, following apparent disagreements with Rumsfeld’s successor, Defense Secretary Robert M. Gates. While Abizaid recognized both the failures and the weaknesses of the US military in Iraq, Admiral Fallon is closely aligned with Vice President Dick Cheney. He is also firmly committed to the “Global War on Terrorism” (GWOT). CENTCOM would coordinate an attack on Iran from the Middle East war theater.

Moreover, the appointment of an Admiral is indicative of a shift in emphasis of CENTCOM’s functions in the war theater. The “near term” emphasis is Iran rather than Iraq, requiring the coordination of naval and air force operations in the Persian Gulf.

US Naval Power in the Region

At present there are two aircraft carrier strike groups in the Persian Gulf region, including the Eisenhower and the Stennis.

In comparison, the deployment of naval power prior to the March 2003 blitzkrieg against Iraq was on a significantly larger scale.

In the early months of 2003, there were five US aircraft carriers within striking distance of Iraq plus one British aircraft carrier. In the 2003 campaign, three carrier strike groups were present in the Persian Gulf (Lincoln, Constellation and Kitty Hawk) and two other US carrier groups (Roosevelt and Truman) were involved in coordinating the bombing sorties from the Mediterranean.

The USS Nimitz nuclear-powered aircraft carrier and its accompanying battle group is currently on its way to the Persian Gulf., which would bring the number of aircraft carriers up to three.

It is unlikely that military action would commence before a third aircraft carrier is positioned in the war theater. (Official statements, however, have indicated that the Nimitz would take over from USS Eisenhower and that only two carrier strike groups would be present in the Persian Gulf Arabian Sea region.) 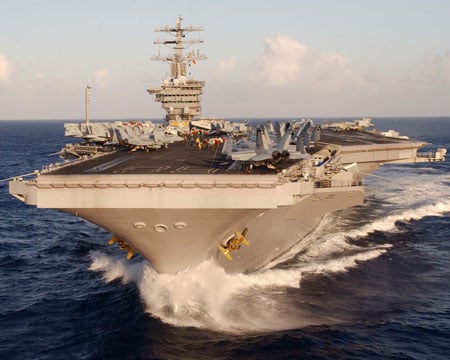 Moreover, US weaknesses in the Iraq war theater, Iran’s capabilities to retaliate and inflict significant damage on US forces inside Iraq, as well as mounting opposition to the US presidency, have a direct bearing on the timing of a military operation directed against Iran.

Iran is politically isolated. Unilateralism prevails within the corridors of the UN as well as within the Middle East war theater.

The US sponsored resolution in the United Nations Security Council received unanimous support. Proposed amendments to the draft resolution were discarded, following US pressures. The text of the resolution was adopted unanimously.

Neither Russia nor China, which have extensive military cooperation agreements with Iran, exercised their veto, nor did they abstain.

This UN Security Council “consensus” was reached following crucial shadow diplomacy by Washington to secure the unanimous support of the entire Council including its five permanent members plus Germany, which participated in the formulation of the draft resolution in separate consultations.

The UN resolution has totally isolated Iran: China and Russia have been drawn into an alliance of stealth with the US.

What is crucial in the Security Council Resolution is that neither China nor Russia will intervene on Iran’s side, if Iran is attacked. Moreover, while Russia and China are diplomatic partners of the US in the UN sponsored economic sanctions regime, they are the object of US military threats as confirmed by Operation Vigilant Shield 07. The latter are war game scenarios conducted from September to December 2006, which explicitly target not only Nemesis (North Korea) and Irmingham (Iran) but also Ruebek (Russia) and Churia (China),

One would expect that separate “deals” were reached respectively with China and Russia, where certain commitments were met in bilateral discussions by Washington. Both Beijing and Moscow, which are partners in the Shanghai Cooperation Organization (SCO) are in an overtly ambiguous situation of turning a blind eye to US military threats, while also supporting the Iranian military in building its air and ground defense systems in the eventuality of US-NATO-Israeli attacks on Iran, which has observer status in the Shanghai Cooperation Organization (SCO).

Iran is the third largest importer of Russian weapons systems after India and China. In the course of the last five years, Russia has supported Iran’s ballistic missile technology, in negotiations reached in 2001 under the presidency of Mohammed Khatami.

Ironically, coinciding with the UN Security Council decision in late March, the Russian press confirmed that the Shanghai Cooperation Organization (SCO) is actually considering an enlargement, which could consist in granting full membership to countries in the SCO (e.g. Iran) which have currently the status of observers.

Meanwhile, the US Congress is at war with the president regarding America’s Iraq war strategy, but not a word is muttered on an impending war againsat Iran, as if it were totally irrelevant.

The threats are real, an incident could trigger a war.

The war criminals in high office desperately need this war to stay in power.

The US Congress is unlikely to be able in a minimum way to reverse the decision to go to war with Iran, despite the fact that this would lead to a worldwide catastrophe, an escalation of the war, with an impending police state in America to support the militarization of civilian institutions

The Role of US Strategic Command (USSTRATCOM)

The Neocons in the Bush administration are in control of key military appointments: specifically those pertaining to Central Command (USCENTCOM), US Stratregic Command (USSTRATCOM) and the Joint Chiefs of Staff.

New military appointments have recently been implemented. The newly appointed commander of USCENTCOM, Admiral Fallon will play a key role in overseeing the military operation in the Middle East War theater.

USSTRATCOM headed by General James E. Cartwright, with headquarters at the Offutt Air Force Base in Nebraska, would play a central decision making and coordinating role in the eventuality of a war on Iran. The administration has demanded USSTRATCOM to elaborate centralized war plans directed against Iran. CENTCOM would largely be involved in carrying out these war plans in the Middle East war theater.

It is worth recalling that in 2004, vice President Dick Cheney had demanded that USSTRATCOM draw up a contingency plan directed against Iran “to be employed in response to another 9/11-type terrorist attack on the United States” on the presumption that the government in Tehran would be behind the terrorist plot. The contingency plan included a large-scale air assault on Iran employing both conventional and tactical nuclear weapons.

USSTRATCOM’s is described “a global integrator charged with the missions of full-spectrum global strike”.

USSTRATCOM is in charge of the coordination of command structures under global C4ISR (Command, Control, Communications, Computers, Intelligence, Surveillance, and Reconnaissance). “Day-to-day planning and execution [by STRATCOM] for the primary mission areas is done by five Joint Functional Component Commands or JFCCs and three other functional components:”

SHOW YOUR SUPPORT FOR CHARLIE SHEEN And VOTE NOW

Wed Apr 4 , 2007
O’Reilly web poll asks “Do you think actor Charlie Sheen will hurt his career by narrating a 9/11 conspiracy film?” Show the O’Reilly Mafia that the people are behind hero Charlie Sheen. Go to the right hand side of this page: (link to bill orielly’s site removed – to stop […]