By TOM KELLY
Last updated at 22:20pm on 19th December 2007
Link
Fears: In the letter, Diana suggested the Prince was plotting ‘an accident’
A handwritten letter from Princess Diana claiming that Prince Charles was plotting to kill her was shown to her inquest yesterday.

In the note, sent to her butler Paul Burrell, Diana suggested that her husband was “planning an accident in my car”.

She also made the astonishing suggestion that Camilla Parker Bowles was just a “decoy” while Charles’s real desire was to marry William and Harry’s nanny Tiggy Legge-Bourke. 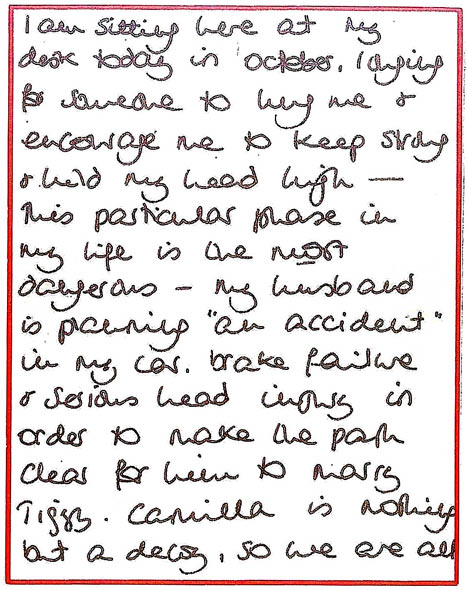 A copy of the letter has previously been published, but the references to “my husband” and to Miss Legge-Bourke were blacked out. The uncensored version was revealed to the public after being read to the London hearing into the death of Diana and her lover Dodi Fayed.

It was sent in October 1993, ten months after Charles and Diana’s separation was announced. Handwritten in black pen, it reads: “I am sitting at my desk today longing for someone to hug me and encourage me to keep strong and hold my head high.

“This particular phase in my life is the most dangerous. My husband is planning an accident in my car, brake failure or some serious head injury in order to make the path clear for him to marry Tiggy. Camilla is nothing more than a decoy so we are being used by the man in every sense of the word.”

Dodi’s father, Harrods owner Mohamed Al Fayed, is convinced that the couple were killed by MI6 on the orders of Prince Philip because she was pregnant and they were about to announce their engagement.

The jury has already heard that Diana told her solicitor she feared both she and Camilla would be assassinated to allow the prince to marry the nanny.

She insisted to Lord Mishcon at a tense private meeting in October 1995 that “reliable sources” had informed her of the plan.

He kept it secret until after the Paris crash in which she died almost two years later.

The respected royal lawyer and Labour peer, who died aged 90 last year after a long illness, also said that the princess told him that Tiggy had undergone an abortion and that she would obtain a medical certificate to prove it.

The inquest had earlier heard claims that the letter is a fake.

Lucia Flecha de Lima, a close friend of the princess, said the butler was “perfectly capable of imitating” her handwriting. 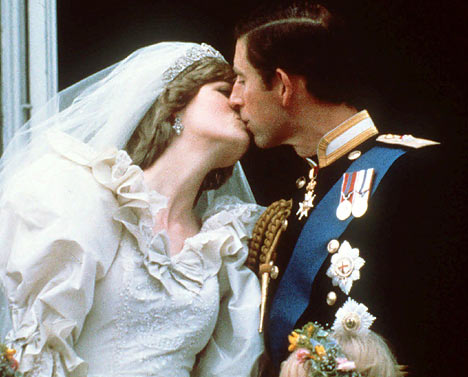 Prince Charles and Diana on their wedding day: The Princess later went on to fear that he wanted her dead

The jury also heard yesterday that Diana could not have been pregnant because she was on the pill.

Miss Gribble told the inquest that Diana was sleeping with Dodi and they shared a cabin during their two trips on the Jonikal.

“They were clearly having a relationship and were on board as a couple,” she said via video link from her home in New Zealand.

But she recalled seeing a strip of contraceptive pills in their room while carrying out her housekeeping duties. “I believe there were pills missing from the packet.”

The inquest has already heard from two witnesses that the princess could not have been pregnant because she had a period days before her death.

When Diana first went to stay with the Fayeds in the South of France in the summer of 1997, Dodi was on board another of the family’s yachts, the Cujo, with his then girlfriend, Kelly Fisher.

Miss Fisher has claimed she was engaged to Dodi but he dumped her after meeting Diana.

Miss Gribble described how on one occasion Dodi took the former Calvin Klein model on to the Jonikal for lunch when the princess was on shore.

She said: “Kelly Fisher didn’t seem very happy at all. In fact she seemed quite upset.”

Miss Gribble told the jury that Henri Paul – chauffeur in the fatal crash in the early hours of August 31 1997 – had given her a lift to the Ritz Hotel in Paris from the airport the previous day. She said he drove like a “bat out of hell”.

“I remember it to be a very hairy drive. It was fast and furious and I was actually quite scared in the back seat.”

Another passenger in the Range Rover, the princess’s holistic healer Myriah Daniels, has already told how she was convinced she was going to die because Paul was driving “like a maniac”.

Government caves in to Monsanto