This is a picture of a Greenpeace activist in a polar bear suit taken at the venue of the United Nations Framework Convention on Climate Change conference in Bali, Indonesia on the 3rd of December this year.

The person who writes the best caption to accompany this photo by January the 15th, wins copies of two excellent documentaries, ‘The Great Global Warming Swindle’ by Martin Durkin (2007) and ‘Global Warming or Global Governance’ by Dr Michael Coffman (2007). Write captions in the Comment section below. 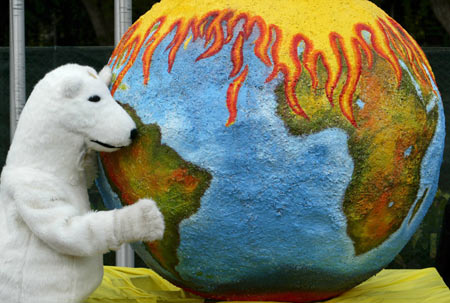 Sun Dec 23 , 2007
It’s common knowledge, he reveals, CIA, Mossad behind terror attacks Link By the Staff of American Free Press Former Italian President Francesco Cossiga, who revealed the existence of Operation Gladio, has told Italy’s oldest and most widely read newspaper that the 9-11 terrorist attacks were run by the CIA and […]