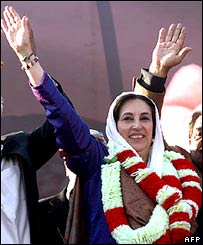 Ms Bhutto – the first woman PM in an Islamic state – was leaving an election rally in Rawalpindi when a gunman shot her in the neck and set off a bomb.

At least 20 other people died in the attack and several more were injured.

President Pervez Musharraf has urged people to remain calm but angry protests have gripped some cities, with at least 11 deaths reported.

Security forces have been placed on a state of “red alert” nationwide.

There were no immediate claims of responsibility for the attack. Analysts believe Islamist militants to be the most likely group behind it.

It was the second suicide attack against her in recent months and came amid a wave of bombings targeting security and government officials.

Nawaz Sharif, also a former prime minister and a political rival, announced his Muslim League party would boycott the elections.

He called on President Musharraf to resign, saying free and fair elections were not possible under his rule.

Ms Bhutto’s remains have been removed from Rawalpindi General Hospital in a van. They are reportedly being taken to the city’s airport.

The attack occurred close to an entrance gate of the city park where Ms Bhutto had been speaking.

Police confirmed reports Ms Bhutto had been shot in the neck and chest before the gunman blew himself up.

Some supporters at the hospital wept while others broke into anger, throwing stones at cars and breaking windows.

Protests erupted in other cities as news of the assassination spread, with reports of 11 deaths in the PPP’s heartland province of Sindh, including four in provincial capital, Karachi.

More than 100 cars were burned in Karachi, while cars and a train were reportedly set on fire in Hyderabad.

# Police in Peshawar, in the north-west, used batons and tear gas to break up a rally by protesters chanting anti-Musharraf slogans

# One man was killed in a “shoot-out” between police and protesters in Tando Allahyar, the mayor said

# Unrest was also reported in Quetta, Multan and Shikarpur

Mr Sharif said there had been a “serious lapse in security” by the government.

But an old friend of Ms Bhutto, Salman Tassir, told the BBC World Service he did not think criticism should be directed at the government.

“There have been suicide attacks on Gen Musharraf also,” he told Newshour.

“I mean it is extremism and the fanatics who are to blame.”

Earlier on Thursday, at least four people were killed ahead of an election rally Mr Sharif had been preparing to attend close to Rawalpindi.

Ms Bhutto’s death has plunged the PPP into confusion and raises questions about whether January elections will go ahead as planned, the BBC’s Barbara Plett in Islamabad says.

The killing was condemned by India, the US, the UK and others.

US President George W Bush telephoned Mr Musharraf for what the White House would only describe as a “brief” conversation on the situation.

Ms Bhutto returned from self-imposed exile in October after years out of Pakistan where she had faced corruption charges.

He had granted an amnesty that covered the court cases she was facing.

But relations with Mr Musharraf soon broke down.

On the day of her arrival, she had led a motor cavalcade through the city of Karachi.

It was hit by a double suicide attack that left some 130 dead.

Rawalpindi, the nerve centre of Pakistan’s military, is seen as one of the country’s most secure cities.

Many analysts say attacks like those on Thursday show the creeping “Talebanisation” of Pakistan.

Radical Muslims calling for Islamic law, and fiercely opposed to the US, have become increasingly active in Pakistani politics in recent years, analysts say.

THE ASSASSINATION OF BENAZIR BHUTTO

The History of the Development of AIDS

Fri Dec 28 , 2007
Not breaking news, but worth reflecting on. Link Chapter Excerpt from “State Origin: The Evidence of the Laboratory Birth of AIDS” by Boyd E. Graves, J.D. The true history of the origin of AIDS can be traced throughout the 20th Century and back to 1878. On April 29 of that […]