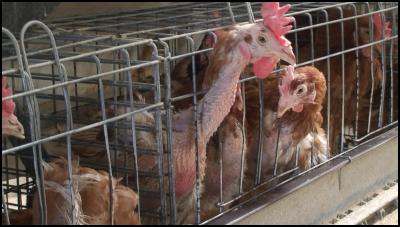 On New Years Eve while many were partying Animal Rights Activists were seeing in the New Year by entering a battery hen farm in South Auckland. Thirty hens were rescued from this farm and the conditions documented.

This was the last in a series of raids that have formed an investigation into the egg production process. During this investigation activists also entered a farm during the daylight in South Auckland late in November and a pullet farm in Northland during early December.

During the December raid 25 pullets were liberated and have since been placed in loving homes. Pullet is the name given to young hens from the age of eight weeks until they start laying. On this particular farm the footage obtained shows small wire cages, similar to battery cages, containing about ten pullets.

Video footage and photographs obtained during this investigation shows that many of the birds were in a poor condition, having missing feathers and inflamed red skin from rubbing on the bars of the cages; all hens shown are de-beaked.

Auckland Animal Action spokesperson Kali Sandbrook says ‘With footage from several farms it is evident that filth, over crowding and cruelty are unfortunately standard for this industry’.

Ms Sandbrook went on to say ‘We hope that the public will use their power to stop this cruelty and resolve to go egg – free in 2008’.

* A low quality version of the footage accompanying this media release can seen on you tube at https://www.youtube.com/watch?v=1c8u5JpCG-I. As mentioned above a hi-quality version, on mini dv, can be obtained from Auckland Animal Action.

* The True Cost of Eggs: a documentary made from footage of this investigation can be viewed at https://www.youtube.com/watch?v=6sd4ikC-tBI. This is available on DVD from Auckland Animal Action.

* Communique received with footage:
˜For the past two months we have been documenting the cruelty inherent in egg production.
We act because the animals who are suffering right now do not have time to wait and hope for parliamentary change. The Government have proven time and time again that they value business over the lives of innocent beings.
– We act out of love and compassion for our animal brothers and sisters.
– We act for the freedom and liberation of all.

Interview with Daniel Estulin: “The war is not against Bin Laden. We are the enemy”

Wed Jan 9 , 2008
Link to interview Interview with investigator and author, Daniel Estulin, on his book, “The True Story of the Bilderberg Group”, which describes an annual gathering where the European and American political elite, and the wealthiest CEOs of the world, all come together to discuss the economic and political future of […]