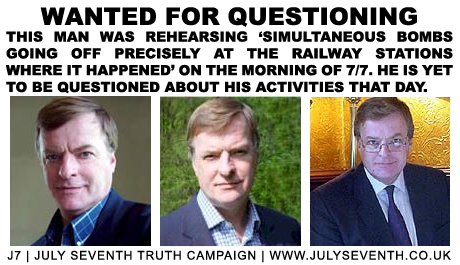 The terrorist attacks that befell New York and Washington on 9-11 and the London bombings of July 7, 2005, were the actualization, or the making real of computer-generated scenarios being staged in the same place at the same time. Think about that for a minute.

Although this is well known among those who have independently investigated these false-flag terror atrocities, these coincidences have never been discussed in the mainstream media. Never.

What kind of conspiracy is this?

How could such uncanny coincidences not be seen as newsworthy?

Peter Power was fired from the Dorset Polic in 1993.
What did he do? Is he being blackmailed?
At the time of the London bombings, Peter Power was Managing Director of Visor Consultants Ltd., a London-based “crisis management” firm. Power is the former police chief from West Dorset (Southern England). Power was suspended from the force in April 1993 and forced to retire in September 1993 after an investigation which remains confidential. As the British press reported in 1993:

The Crown Prosecution Service has been sent details of an investigation into a senior police officer with the Dorset force. Dorset police confirmed yesterday that Superintendent Peter Power, the officer in charge of the west of the county, has been suspended on full pay since April but refused to outline the allegations against him. Power, who was involved in the Iranian embassy siege and King’s Cross fire, transferred to Dorset in 1990 after serving 19 years in the Metropolitan police.

Power Suspension in Dorset Echo, April 1993
What did Power do in Dorset?

The Crown Prosecution Service is responsible for prosecuting criminal cases investigated by the police in England and Wales. For the past two months, I have repeatedly called and sent emails to Visor Consultants to inquire about Power’s history with the Dorset police force and to ask about the un-named company involved in the drills being done on July 7, 2005.
Give him a call. Peter Power and his London-based company Visor Consultants can be reached at: (44) 20 79 17 60 26
Mr. Power clearly does not want to come to the phone or answer my questions about what he was charged with having done in Dorset or the unnamed company involved in the July 7 drills that became deadly reality for the Londoners in the Tube or the bus at Tavistock. But why doesn’t the mainstream media call him? Are they not interested in what happened in London on July 7, 2005?

WHO IS PETER POWER? 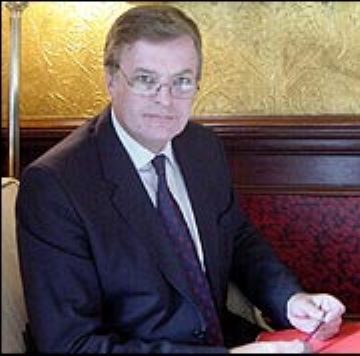 People who rely on the mainstream media will have no idea who Peter Power is. He has only been mentioned in the press 4 times since the London bombings of 2005, a terrorist attack that he evidently played a role in. It should be noted that Peter Power and the London bombing drill have never been mentioned in the U.S. print media. On the day of the bombings of the London Underground and a bus at Tavistock, Power and his company, Visor Consultants Ltd., were conducting a drill for a mysteriously un-named client. The Visor exercise was precisely identical to the bombings that occurred. Ask yourself, just how likely is such a coincidence?

“THIS IS THE REAL ONE”

Shortly after the London bombings, in an interview with Peter Allen on BBC Radio 5 Live’s “Drivetime”, Power explained the incredible coincidence of the terror attacks with his company’s drill:

Power: At half past nine this morning we were actually running an exercise for a company of over a thousand people in London based on simultaneous bombs going off precisely at the railway stations where it happened this morning, so I still have the hairs on the back of my neck standing up right now. Peter Allen: To get this quite straight, you were running an exercise to see how you would cope with this and it happened while you were running the exercise?

Power: Precisely, and it was about half past nine this morning, we planned this for a company and for obvious reasons I don’t want to reveal their name but they’re listening and they’ll know it. And we had a room full of crisis managers for the first time they’d met and so within five minutes we made a pretty rapid decision, “this is the real one” and so we went through the correct drills of activating crisis management procedures to jump from slow time to quick time thinking and so on.

Later on July 7, Power appeared in a television interview on ITV News in which he said more about the nature of the operation:

Power: Today we were running an exercise for a company – bearing in mind I’m now in the private sector – and we sat everybody down, in the city – 1,000 people involved in the whole organisation – but the crisis team. And the most peculiar thing was, we based our scenario on the simultaneous attacks on an underground and mainline station. So we had to suddenly switch an exercise from ‘fictional’ to ‘real’. And one of the first things is, get that bureau number, when you have a list of people missing, tell them. And it took a long time – ITV Host: Just to get this right, you were actually working today on an exercise that envisioned virtually this scenario?

Power: Er, almost precisely. I was up to 2 oclock this morning, because it’s our job, my own company. Visor Consultants, we specialise in helping people to get their crisis management response. How do you jump from ‘slow time’ thinking to ‘quick time’ doing? And we chose a scenario – with their assistance – which is based on a terrorist attack because they’re very close to, er, a property occupied by Jewish businessmen, they’re in the city, and there are more American banks in the city than there are in the whole of New York – a logical thing to do. And it, I’ve still got the hair….

One would think that Power’s incredible revelations about the bombing and the uncanny coincidence with the Visor drill would be a subject of great interest to the media and the investigative agencies of Britain and the United States. Unfortunately, that has not been the case. 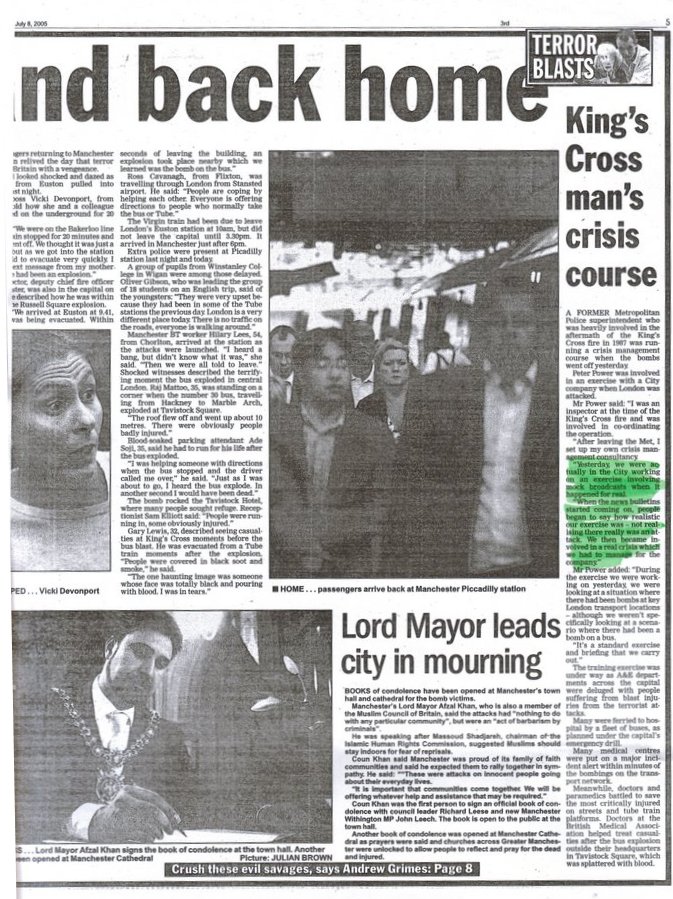 The incredible comments of Peter Power were only reported in the newspaper of Manchester, England, on July 8, 2005
There has been virtually no discussion in the “mainstream” media that the London bombings or other terror atrocities and disasters occurred within the context of nearly identical security drills. Astonishing first-hand accounts from people engaged in these exercises, like Peter Power, were reported shortly after the events occurred, yet these extremely important stories remained confined to local news outlets and were never published in the major national and international news outlets, in newspapers like the New York Times, for example. (The motto of the New York Times is “All the news that’s fit to print.)

The New York Times has not reported one word about the amazing comments of Peter Power in relation to the London bombings of 2005, although Power is connected to Mayor Giuliani and his consulting company. Power serves on a Canadian advisory board with the mysterious Richard J. Sheirer (or Scheirer), Giuliani’s vice president and the former director of New York City’s Office of Emergency Management (OEM) originally created by Jerome Hauer.

The censorship of this story by the New York Times appears to be in line with the paper’s motto. The New York Times has not reported one word about Vigilant Guardian, the exercise that was on-going in New York on 9-11. How can that not be newsworthy?

The comments of Peter Power were treated by the BBC in the same way as Stephen Evans’ first-hand report of “the series of explosions” he witnessed at the World Trade Center on 9-11.

Evans was on the ground floor of the South Tower when planes struck the complex. He gave his eyewitness account live to the BBC’s radio and television networks.

When Evans went on the air on BBC World television shortly after the collapse of the twin towers, he repeatedly described the series of explosions he had seen and felt at the base of WTC 2, prior to the collapse of the tower. From the very first minute he spoke on television, Evan’s account of explosions has been stifled by the BBC. When the BBC revisited 9-11 with Evans, there was no mention of the “series of explosions” he talked about on the day of the attacks. Such omissions are defined as censorship.

Evidently, the astonishing eyewitness account of Stephen Evans on 9-11 was dropped into the memory hole at the BBC. The revealing comments of Peter Power were destined to the very same fate. To question the media version of events, which omits these very significant first-hand accounts, is to risk being branded a “conspiracy theorist.” 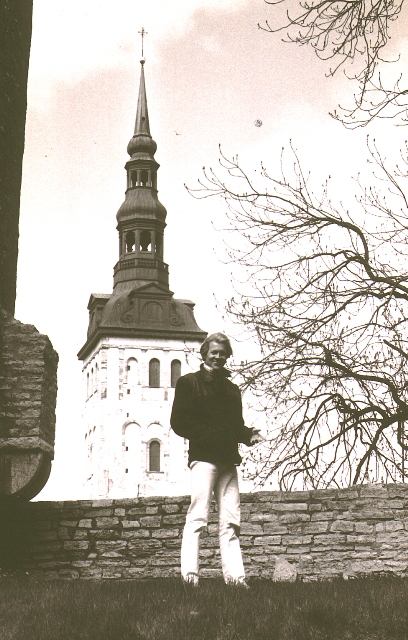 Christopher Bollyn is an independent American journalist working on exposing the lies of 9-11 and other acts of false-flag terrorism. To support his work, please send a donation to: shop@bollynbooks.com

Thank you for your support.

J7: The July 7th Truth Campaign, “Visor Consultants’ ‘simultaneous bombs’ rehearsal on 7 July 2005” and other pages on the website
https://julyseventh.co.uk/july-7-terror-rehearsal.html

Mon Feb 18 , 2008
Olbermann is the only one on msm who is telling it as it really is. If you have never seen him this is a good opportunity to acquaint yourself with a real media hero.