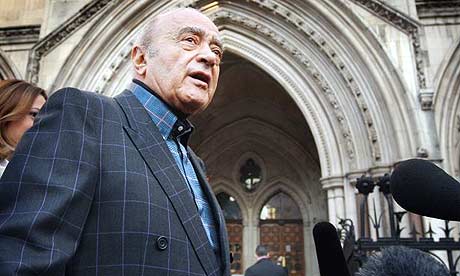 Mohamed Al Fayed arrives at the high court to give evidence in the inquest into the deaths of his son and Diana, Princess of Wales. Photograph: Peter Macdiarmid/Getty

Mohamed Al Fayed branded Prince Philip a “Nazi” and a “racist” in the high court today as he detailed his belief that his son Dodi and Diana, Princess of Wales, were “murdered” in a conspiracy initiated by the royal family and carried out with the involvement of Tony Blair, the security services and others.

By the end of his day in court, Fayed’s list of participants in the alleged murder plot and cover-up encompassed Diana’s sister Sarah McCorquodale and her husband, Robert Fellowes; two former chiefs of London police; the British ambassador to France; driver Henri Paul; two French toxicologists, members of the French medical service; three bodyguards he once employed and several of the princess’s closest friends.

In a letter to the intelligence and security committee in February 2006, Fayed said that “such a momentous and horrific action would have been directly sanctioned by the prime minister”.

Parts of the letter were read aloud today. Richard Horwell QC, acting at the inquest for the Metropolitan police commissioner, asked Fayed to confirm: “The list of conspirators, those who are involved in this, we can add Tony Blair to this list?”

Fayed replied: “You can.”

The Harrods owner repeated to the court his claims that Diana was killed because she was pregnant at the time of her death, and that she and Dodi had planned to announce their engagement.

“Diana told me on the telephone that she was pregnant,” he told the inquest. “I was the only person that they told.”

The couple called him to announce their intention to marry an hour before the crash, Fayed said, but he later seemed unclear about whether he had been told his son was about to propose, or that Dodi had done so and Diana had accepted.

He said the princess’s friends, who told the inquest there was no way she could have been pregnant or contemplating remarriage, were lying, and said: “All the witnesses who have been saying this are part of the cover-up and have been told what to say.”

He said Diana told him “she knew Prince Philip and Prince Charles were trying to get rid of her” a month before the crash.

Fayed named a photographer, James Andanson, as the most likely suspect to have carried out the murder on the orders of the security services.

Andanson’s body was found in a burnt out car in 2000 and he is believed to have committed suicide. The inquest already heard that Andanson had produced evidence to show he was at home in Lignieres, 177 miles south of the French capital, at the time of the crash.

“There was one paparazzi member in the pay of the security services. This is likely to have been James Andanson, who exacted the murder in his own Fiat, pushed the car and a strobe light having been used to blind Henri Paul,” Fayed said.

A “steel wall from the security services” prevented him from providing proof of all his claims, Fayed said. “I have been fighting for 10 years to be where we are,” he told the jury.

Members of the British and French security services may have been part of the ambulance crew that took Diana to hospital to ensure she bled to death, Fayed claimed. He said that a hospital which could have treated the Princess was 10 minutes away from the site of the crash in the Alma tunnel in Paris but it took more than an hour to reach another medical institution.

Fayed believes the royal family would never have accepted a marriage between the mother of the second heir to the throne and an Egyptian Muslim, and alleges the Queen’s husband worked with the security services to stage the car crash in Paris in August 1997 that killed the couple and their driver.

“It’s time to send [Philip] back to Germany from where he comes,” Fayed said. “You want to know his original name – it ends with Frankenstein.”

Ian Burnett QC, for the coroner, asked Fayed if his allegations “stem from your belief that Prince Philip is not only a racist but a Nazi as well”.

Charles participated in the hope that he would then be able to marry his long-term mistress, Camilla Parker Bowles, Fayed said. Fayed dismissed suggestions that Diana’s previous relationship with a Muslim heart surgeon, Hasnat Khan, was serious, saying: “He was just a friend, maybe some relations, how can she marry someone like that, that lives in a council flat and has no money.”

Fayed said the conspiracy was coordinated for Philip from the British embassy in Paris by the Queen’s private secretary, Fellowes. Sir Michael Jay, the then British ambassador to France, was also involved, Fayed said.

Fellowes told the inquest last week that he was in Norfolk at the time.

Fayed described Parker Bowles as a “crocodile wife” and the Windsors as “that Dracula family”, according to reports of his testimony by Sky News.

He disputed evidence that Paul, the driver, was drunk. Paul was part of the plot, and in the pay of security services in Britain and France, Fayed said.

“When he was killed, they find 20,000 francs in his pocket, because he disappeared three hours before the murder being briefed on what to do.”

Fayed said it had been proved “black and white” that blood samples from Paul proving the driver was intoxicated were not his.

He claimed the withholding of a note of a meeting between Diana and her divorce lawyer Lord Mishcon recording Diana’s fears for her safety proved she had been deliberately killed.

The police kept the note at Scotland Yard but did not hand it to the royal coroner overseeing the inquest at the time until Diana’s former butler Paul Burrell produced a note from the princess detailing similar allegations in 2003.

Fayed said Diana had kept letters from Prince Philip to be revealed in the event of her death, but those letters had now gone missing.

The coroner at the inquest, Lord Justice Scott Baker, announced he was seeking a copy of a video in which Burrell apparently admitted not telling “the whole truth” when he testified last month. The video was obtained by the Sun.

Burrell had alleged in his book that the Queen warned him of “powerful forces” at work in a meeting weeks before the fatal crash, but failed to give details of this when he testified, saying only that “she showed great concern” about Diana and Dodi’s relationship.

The coroner refused to allow Fayed to read the Sun’s article to the jury.

He clashed repeatedly with Horwell, who at one stage told him: “You truly do not care about the interests of other people.”

In a later outburst, Fayed declared, “I’m not going to talk to you any more,” leading Lord Justice Scott Baker to suggest a break.

Fayed’s final words to the coroner today were: “I need your help please.”

The inquest continues tomorrow, and Fayed is not scheduled to appear. Other witnesses due this week include Elizabeth Andanson, the wife of the photographer Fayed implicated.