As the New Zealand government is now promoting the use of HPV vaccines, it seemed appropriate to repost this.
https://www.naturalnews.com/report_HPV_Vaccine_0.html 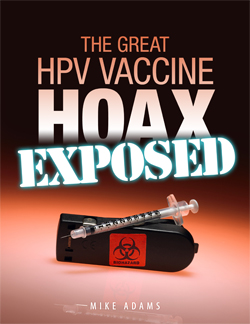 (NaturalNews) For the last several years, HPV vaccines have been marketed to the public and mandated in compulsory injections for young girls in several states based on the idea that they prevent cervical cancer. Now, NaturalNews has obtained documents from the FDA and other sources (see below) which reveal that the FDA has been well aware for several years that Human Papilloma Virus (HPV) has no direct link to cervical cancer.

NaturalNews has also learned that HPV vaccines have been proven to be flatly worthless in clearing the HPV virus from women who have already been exposed to HPV (which includes most sexually active women), calling into question the scientific justification of mandatory “vaccinate everyone” policies.

Furthermore, this story reveals evidence that the vaccine currently being administered for HPV — Gardasil — may increase the risk of precancerous cervical lesions by an alarming 44.6 percent in some women. The vaccine, it turns out, may be far more dangerous to the health of women than doing nothing at all.

If true, this information reveals details of an enormous public health fraud being perpetrated on the American people, involving FDA officials, Big Pharma promoters, and even the governors of states like Texas. The health and safety of tens of millions of young girls is at stake here, and what this NaturalNews investigative report reveals is that HPV vaccinations may not only be medically useless; they may also be harmful to the health of the young girls receiving them.

This report reveals startling facts about the HPV vaccine that most people will find shocking:

• How it may actually increase the risk of precancerous lesions by 44.6 percent.

• The FDA has, for four years, known that HPV was not the cause of cervical cancer.

• Why mandatory HPV vaccination policies may cause great harm to young girls.

Click the NEXT button below to continue reading…go here:
https://www.naturalnews.com/report_HPV_Vaccine_0.html