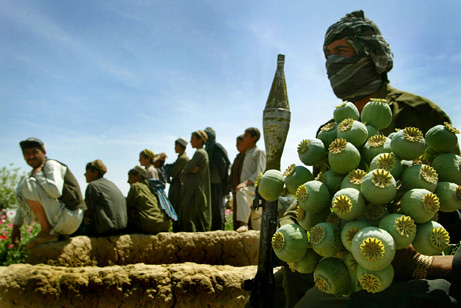 UNITED NATIONS, June, 26 2008 — Afghan opium cultivation grew 17 percent last year, continuing a six-year expansion of the country’s drug trade and increasing its share of global opium production to more than 92 percent, according to the 2008 World Drug Report, released Thursday by the United Nations.

Afghanistan’s emergence as the world’s largest supplier of opium and heroin represents a serious setback to the U.S. policy in the region. The opium trade has soared since the U.S.-led 2001 overthrow of the Taliban, which had eradicated almost all of the country’s opium poppies in 2001. The proceeds from the illicit trade — which is concentrated in Taliban strongholds — are now helping finance a resurgent Taliban that is battling American troops and their allies.

The Taliban earned $200 million to $400 million dollars in revenues last year through a 10 percent tax on poppy growers and drug traffickers in areas under its control, Antonio Maria Costa, executive director of the U.N. Office of Drugs and Crime, said in an interview. He estimated that farmers and drug traffickers last year earned about $4 billion, half of the country’s national income. Afghanistan’s high-yielding variety of opium poppies has helped double world opium production since 2005. With production far outpacing world demand last year, U.N. anti-drug officials and government intelligence agencies worry about massive stockpiling of the drug.

The Bush administration also cited U.N. data suggesting that overall opium production will fall slightly this year in Afghanistan — the result of drought, crop substitution funds, and the consolidation of the drug trade in five southern provinces — but acknowledged the struggles of dealing with spiraling opium production.

"The drug threat in Afghanistan remains unacceptably high and requires a long term commitment by both the Afghan government and international donors," said Susan Pittman, spokeswoman for the State Department’s Bureau of International Narcotics and Law Enforcement Affairs. "We remain determined to reduce cultivation."

However, the administration said the U.N. report confirms its view that the broader international effort to contain the use of illicit drugs is succeeding, including in the United States, where drug consumption has dropped over the past decade.

The 303-page report — produced by the Vienna-based U.N. Office on Drugs and Crime — finds that opium cultivation in southeast Asia increased by 22 percent in 2007, ending a six-year decline in a region that once produced most of the world’s heroin. The majority of last year’s growth was driven by a 29 percent spike in cultivation in Burma.

The report also tracks a surge in marijuana production in Afghanistan, which surpassed Morocco as one of the world’s major producers. It also noted that growers in the United States and Canada have shifted their production to indoor laboratories, which can produce more potent strains.

The report details the emergence of new hubs for transshipment and drug use — including countries such as Guinea-Bissau as well as Saudi Arabia, which in 2006 led the world in seizures of amphetamines.

Some 26 million people, about 0.6 percent of the world’s adult population, are addicted to drugs, the report said. About one in 20 people have used some form of illicit drug in the past 12 months.

Cocaine production in Bolivia, Peru and Colombia increased last year, though the overall yields increased by only about 1 percent. Illicit drugs are responsible for about 200,000 deaths each year, a fraction of the nearly 5 million who die each year from tobacco.

Drug consumption in the United States, meanwhile, continued a "very significant" reduction, Costa said, including a 19 percent decline over the past decade in the number of U.S. workers who tested positive for cocaine use. Costa said the U.S. Drug Enforcement Agency has been warning him of an explosion of amphetamine use in the United States, but that studies on workplace drug testing in the United States show a decline. " I just don’t see it," he said.

"The U.S. has always been characterized by very high levels of drug addiction," he said. But in the past five years, "we have noted a perceptible decrease, especially among the younger population, aged 16 to 22," he said. "The country is doing something right."

Sat Jun 28 , 2008
Aspartame is an artificial sweetener, known to be highly toxic, yet an ingredient in diet drinks throughout much of the world, including New Zealand. Look on your diet drink labels for “Sweetener 951.”  Don’t drink it – tip it out. https://www.rense.com/general82/gcar.htm By Dr. Betty Martini, D.Hum. 6-27-8 George Carlin was […]