In the weeks leading up to the Beijing Olympics, an atmosphere of fear and insecurity is unfolding.

China has not only been targeted for its human rights violations, a China based Islamic terrorist organization has announced that it is planning to "create havoc" at the outset of the Olympics.

According to media reports, the Turkestan Islamic Party (TIP) has claimed responsibility for several pre-Olympic terror attacks including the July 21 bombing of three buses in Kunming, capital of Yunnan, which killed two and left 13 injured, as well as a similar Shanghai bus bombing in May. The TIP also claimed responsibility for an attack in Wenzhou on July 17 using an explosives-laden tractor and the bombing of a Guangzhou plastics factory on July 17 (Sydney Morning Herald, 27 July 2008).

The leader of the Turkestan Islamic Party (TIP) Commander Seyfullah in a mysterious video broadcast warned both athletes and spectators that it is planning to carry out simultaneous attacks in several highly populated urban areas, with a view to ultimately sabotaging the Olympic games:

"Through this blessed jihad in Yunnan this time, the Turkestan Islamic Party warns China one more time. Our aim is to target the most critical points related to the Olympics.

We will try to attack Chinese central cities severely using the tactics that have never been employed. We warn China and the international community for the last time that those spectators, athletes, particularly the Muslims, who are planning to attend the Olympics, please change your intention from going to China. Please do not stand together with the faithless people. The Turkistan Islamic Party volunteers will conduct violent military actions against individuals, departments, venues, and activities that are related to the Olympics in China." (Transcript of alleged Statement of Commander Seyfullah, released to the media by IntelCenter, Washington, 23 July 2008 https://www.intelcenter.com/ ) 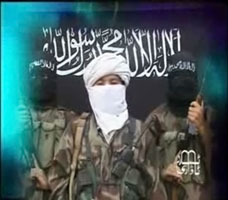 The authenticity of the video is dubious, the timing of its release following the Kunming TIP bombings and barely two weeks prior to the Olympics is suspicious. The mystery video was made available to the Western and Chinese media by IntelCenter, a private Washington based Intel company on contract to US intelligence and the Pentagon. How, from whom and when it was obtained has not been revealed.

The video contains a carefully crafted narrative. It sends a clear-cut message with evocative images. Keep away from the Olympic games. It starts with the Beijing’s Olympic logo going up in flames as a rocket hits an Olympic venue. (See Toronto Star, August 1, 2008)

Who is behind the Turkestan Islamic Party?

According to Stratfor, a US based think tank on intelligence issues, the Turkestan Islamic Party (TIP) which claimed responsibility for the pre-Olympic terror attacks belongs to the broader East Turkestan Islamic Movement (ETIM), based in the Xinjiang-Uygur autonomous region.

The ETIM is known to be covertly supported by Pakistan Inter Services Intelligence (ISI), acting in close coordination with the CIA. The role of Pakistan’s ISI in supporting the Islamist Uygur insurgencies goes back to the mid-1990s. According to Yossef Bodansky in a 2000 Defense & Foreign Affairs’ Strategic Policy report:

"The Pakistani terrorism-sponsoring activities along the Silk Road were the primary instrument of Islamabad’s regional strategy. The ISI -sponsored insurgency and terrorism along the western gateways to the PRC were strategic developments with grave ramifications."

The historical relationship between Pakistan’s military intelligence (ISI) and the CIA is amply documented. In the course of the 1980s, the Covert Action Division of the ISI was used by the CIA to recruit and train the Mujahideen, who were sent to Afghanistan to fight Soviet troops.

In the post Cold war era, this CIA-ISI relationship remained largely intact. The ISI continued to be used by Washington to channel covert support to various Islamic fundamentalist movements, including Al Qaeda, involved in false flag terror attacks. (Michel Chossudovsky, America’s War on Terrorism, Global Research, Montreal, 2005). The ISI as an intelligence body has played a key covert role in America’s "war on terrorism", by suupporting and abetting these terrorist organizations and by also sustaining the illusion of an "outside enemy".

In China, covert support to the Uygur insurgency largely served the purpose of creating political instability. In Xinjiang-Uigur, Pakistani intelligence (ISI), acting in liaison with the CIA, supports several Islamist organizations including the Islamic Reformist Party, the East Turkestan National Unity Alliance, the Uigur Liberation Organization and the Central Asian Uigur Jihad Party. Several of these Islamic organizations have received support and training from Al Qaeda, which is a US sponsored intelligence asset. The declared objective of these Chinese-based Islamic organizations is the "establishment of an Islamic caliphate in the region" (Michel Chossudovsky, op cit, Chapter 2).

The "caliphate project" which is supported covertly by US-Pakistani intelligence encroaches upon Chinese territorial sovereignty. Supported by various Wahabi "foundations" from the Gulf States, secessionism on China’s Western frontier is consistent with U.S. strategic interests in Central Asia.

By tacitly promoting the secession of the Xinjiang-Uigur region (using Pakistan’s ISI as a "go-between"), Washington is attempting to trigger a broader process of political destabilization and fracturing of the People’s Republic of China.

"China reportedly said that East Turkestan (Uyghur) Islamic terrorists [are] operating on Pakistan’s soil and trained in special camps in its territory. This is the first time Beijing administration charged Pakistan for harboring anti-China elements in its soil. The revelation came in a court document in the trial of jailed Canadian [Celil] in which it was mentioned that Celil joined the East Turkistan Liberation Organisation (ETLO) way back in 1997 and acted as a senior instructor in Kyrgyzstan. As per the document, Celil allegedly recruited people and sent them to various training camps on the Pamir Plateau in Pakistan territory. ETLO’s prime objective is to carve an independent East Turkestan by uniting parts of China and Kyrgyzstan." (B. Raman, US & Terrorism in Xinjiang, South Asian Analysis, 2002 https://www.southasiaanalysis.org/papers5/paper499.html ) 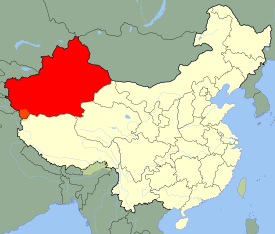 The TIP which has claimed responsibility for several pre-Olympic terror attacks belongs to the broader ETIM which is supported covertly by Pakistan’s ISI.

The role of Pakistan’s ISI in Xinjiang-Uygur is known to Chinese intelligence. According to a 2002 report, Beijing accused Islamabad of training East Turkestan Islamic operatives on the Pamir plateau inside Pakistan, bordering on the Southern tip of Xinjiang-Uygur region (see map).

For political reasons, however, the issue of ISI-CIA involvement has been carefully avoided. In the weeks leading up to the Olympics, the Chinese authorities are anxious to avoid controversy. The issue of foreign support to the East Turkestan Islamic Movement is unmentionable.

Sabotage or Disruption of the Olympics?

Both the Western and Chinese media in chorus, quoting the mystery video, are asserting that Muslim terrorists will attack the Olympics.

The message in the videotape released by IntelCenter is unequivocal: Turkestan Islamic Party (TIP) Commander Seyfullah, "warned athletes and spectators ‘particularly the Muslims’ to stay away from the Olympics." (quoted by Associated Press, August 1, 2008)

An atmosphere of fear and insecurity has been created, quite deliberately, which could potentially undermine the Olympic Games.

Are these terror warnings and attacks, not to mention the mysterious video, part of a US sponsored PsyOp which is being applied to discredit the Chinese leadership and/or sabotage the Olympics?

How reliable is the videotape? What is the credibility of IntelCenter? Neither the Western nor the Chinese media have investigated the matter.

IntelCenter, the private Intel company on contract to US intelligence happens to be the same Washington outfit which released, also in a timely fashion, several mysterious Al Qaeda related videotapes including the 11 September 2007 video of Osama bin Laden as well as an April 2006 video featuring Al Qaeda’s Number Two Man Ayman al-Zawahiri.

IntelCenter describes "the collection, exploitation, analysis and dissemination of terrorist and rebel group video materials" as one of its "core competencies". InteCenter’ "primary client base is comprised of military, law enforcement and intelligence agencies in the US and other allied countries around the world." (https://www.intelcenter.com/aboutus.html )

At an August 1st press briefing, Sen. Colonel Tian Yixiang of the Olympics security command told reporters that the biggest threat to security comes from "the East Turkestan terrorist organization" meaning the ETIM based in the Xinjiang-Uygur autonomous region.

What the Chinese official failed to mention is that there is evidence that these terrorist organizations have over the years been covertly supported by Pakistani intelligence, operating on behalf of Washington.

Thar She Blows: The Last Hurrah for the Banking System

Tue Aug 5 , 2008
by Mike Whitney | July 29, 2008 – 12:26pm The Bush administration will be mailing out another batch of “stimulus” checks in the very near future. There’s no way around it. The Fed is in a pickle and can’t lower interest rates for fear that food and energy prices will […]