Alas, this article from Thomas Peep’s Daily News is satirical.  Sadly, Mr Gore is not known for his honesty and he’ll only come clean like this if all of hell freezes over.

For those who still believe the cataclysmic pronouncements he made in An Inconvenient Truth, wake up – remember that this man is a professional politician, not an environmentalist.  Gore, whose Dad was also a politician, graduated with a BA in Government, not with a Bachelor of Science in climate science.   Also, take a look at his track record and you will learn that he is duplicitous and doesn’t practice what he preaches.  For example, when he was the Vice President of US – when he had the power to do something, he failed to do anything for genuine environmental problems, such as the dissemination of DU, nanotechnology and GMOs.  Plus throughout the years he has flogged the “carbon polluters,” he and his family have been aiding and profiting from an oil company on a grand scale. Gore’s political influence has enabled the Occidental Petroleum Company, which former CEO, Armand Hammer said had Gore’s father in his back pocket, to acquire the oil-drilling rights over 47,000 acres of the Elk Hills reserve in California.  Not only did the 1997 sale represent the largest quantity of public land to be turned over to a private corporation in US history, but it also spelt doom for the Kitanemuk people’s traditional lands and encroached upon an area environmentalists said was home to three rare animal species.  On the very same day as the sale, in an audacious display of hypocrisy, one which should serve as a warning to us all, Gore gave a speech on the “terrifying prospect” of global warming, a problem that he ascribed to the unchecked use of fossil fuels, such as oil!.

If you want to do more research into what is really behind the global warming issue, I’ve put some handy links and quotes at the end of this post. (CS)

Now for the article from Thomas Peep’s Daily News:

Al Gore Admits: “I was Wrong about Climate Change”

Yesterday, in a stunning reversal, Al Gore broke down in tears in front of a throng of reporters at Chicago’s World Green Day conference, admitting publicly for the first time that the theory of Global Warming, which the former Vice-President has touted for the better part of three decades, has been nothing more than “hot air”.  ”The fear that I’ve been perpetuating a hoax has been growing inside me for some time. I finally had no alternative but to admit that my confidence in the global warming theory was melting away faster than the ice caps supposedly were. The mountain of evidence and hard scientific data has overwhelmingly persuaded me to reverse my previous position on Global Warming.”

Gore went on to plead his case by presenting another powerpoint slideshow depicting what he described as  “irrefutable evidence.”

The Polar bears aren’t drowning. (the pictures of them clinging to icebergs for their lives, are actually the bears frolicking, as they have done for centuries)

The Artic and Antarctic ice sheets are not melting.

The world’s oceans and seas, that are all interconnected, are not rising. (He admitted sheepishly that his six year old niece pointed out to him that it’s impossible for sea levels to rise in one place and not another) He added, “I’m quite sure the millions of people who live on the coast of America would have reported ever encroaching seas by now if this sad and disingenuous tale was true.”

There is no consensus amongst any scientists that the earth is heating up. The only consensus is that left-wing extremists agree that fear and hysteria is the best way to gain grant money from gullible governments.

The graph used in the documentary “An Inconvenient Truth” known as the “hockey stick” because of it’s dramatic up sweep in the last 20 years, was in fact doctored to suit his own scaremongering needs. The previous 200 million years, which show similar up-sweeps; peaks and valleys,  did not suit his hysterical viewpoint, so, he made a conscious decision to jettison this sound-science.

Carbon offsets are one of the saddest jokes ever perpetrated on the sheeple of this planet. (Almost as bad as the global dimming theory)

Carbon offsets do not work. (Planting trees to reduce CO2 emissions is likened to people drinking sea water to keep the world’s oceans down — as CO2 is only held by a tree for a certain time before being released back into the atmosphere)

Even if the world heated up by 5 degrees Celsius, the coldest parts of both poles are minus 30 degrees Celsius. Higher temperatures would result in more condensation at the equator,  which results in more snow over the polar caps at the coldest points and thicker ice sheets; this would, in effect trap more water as ice, not less, resulting in lower coast lines. (This has not happened, proof-positive that the world is not heating up)

The environmental movement, a once noble cause, has been hijacked by the loony left, homeless anti-capitalists like Ed Begley who use fear for political expediency, who stymie growth through the use of hysterical propaganda. They deliver the propaganda to a willing audience of conspiracy theorists, weak-minded individuals, and worse still,  starfuckers who are so awestruck by a cadre of environmentalist Hollywood elitists who, whilst being the most outspoken on environmental issues, end up,  more often than not, being the biggest hypocrites with their lavish lifestyles, private jets, energy-sucking 10-bedroom mansions, fleets of limousines, prestige cars and entourages of hangers-on that serve no real purpose to either them or humanity. 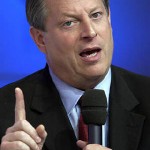 The rise in temperature: Is the Earth hotter now than it was 40 years ago?

Gore saved his most elaborate explanation for the microscopic rise in urban temperatures that has been reported relentlessly in the mainstream-press.
“When we talk about Earth’s temperature, we are really talking not about overall temperature but about our cities’ temperatures, as that’s where the vast majority of people live. The fact is: cities are in fact hotter now than they were 40 years ago. This is true. The higher temperatures in recent decades is the direct result of ‘urban sprawl’.” Gore stated. ”Take a city like Los Angeles which has urban sprawl in all directions, sprawl that has tripled and quadrupled over the past 50 years. The vast networks of roads, concrete, glass, steel, and other raw materials now covering this once arid landscape create the temperature rise. Simply put:  concrete, tar, metal, glass, steel, heat up far more during the day than fields, valleys, rivers, and forests, thus increasing temperature in the most densely populated cities. If temperatures were measured in the middle of nowhere there would be no significant increase.

If we were to return Los Angeles today to the rural landscape, as it was in say 1880, the temperature in the middle of the day would be 5-10 degrees lower than it is now. So, the bigger the urban sprawl, the higher the temperature. We have used these alarming statistics, that this city, or that city has posted the highest temperature, or the hottest month in the past 100 years to scare people and manipulate statistics to support our hysterical viewpoints.” Gore went on to say. “And for that, people of planet earth, I am truly sorry.” 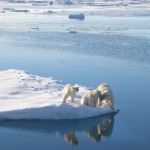 Gore went on for two hours taking aim at myth after myth and shooting it down. All that was left after the marathon three-hour admission of guilt was a shadow of man who once came within a heartbeat of being President.

1.    The Great Global Warming Swindle, (2007), BBC Ch 4 documentary by M. Durkin, is available to download from the Internet.

7.    Endgame: Blueprint for Global Enslavement, (2007), a documentary by A. Jones, is available at Google Video & the infowars.com online shop.

8.  Read comments from Richard N. Haass of the Council of the Foreign Relations. He stated that global warming and terrorism will be used as an excuse to dissolve the sovereignty of nations. He wrote in his article “State sovereignty must be altered in a globalized era,” that a system of world government must be created and sovereignty eliminated in order to fight global warming, as well as terrorism. “Moreover, states must be prepared to cede some sovereignty to world bodies if the international system is to function,” asserts Haass. “Globalization thus implies that sovereignty is not only becoming weaker in reality, but that it needs to become weaker. States would be wise to weaken sovereignty in order to protect themselves…” In a report titled “The First Global Revolution” (1991) published by the Club of Rome, a globalist think tank, is this: “In searching for a new enemy to unite us, we came up with the idea that pollution, the threat of global warming, water shortages, famine and the like would fit the bill…. All these dangers are caused by human intervention… The real enemy, then, is humanity itself.”

Thus, he is admitting that man-made global warming is a scam concocted in order to further the globalists’ agenda for one-world government.

EU presidency blasts US recovery plans as 'way to hell'

Fri Mar 27 , 2009
YahooNews STRASBOURG (AFP) – The European Union’s Czech presidency Wednesday blasted US plans to spend trillions of dollars to revive its economy as a “way to hell”, before downplaying the remark to avert a diplomatic crisis. Outgoing Czech Prime Minister Mirek Topolanek told lawmakers at the European Parliament in Strasbourg […]