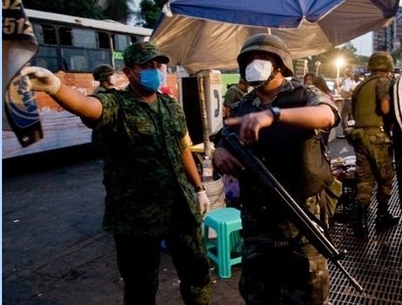 The swine flu is common in the agribusiness, and antibodies to swine flu are present in 20% of vetenarians and 5% of pig farm workes, and rarely kills pigs. However, this swine flu that has presented in Mexico, Texas, California, Queens NYC, London, Italy, etc. has genes of swine, avian, human, and asian flu. This is without any doubt a pandemic flu with a current case fatality estimated at 10 % plus, and rapidly is leaping across North America and to Europe. Since 1997, the H5N1 flu has spread to all continents. Genetics showed that six strains had high pathogenic case fatality rates in the range of 70% average from 25 % to 100 % case fatality rates in humans, with some clusters of human to human spread, with close physical contact. Defiencies in two amino acids needed to allow rapid attachment to human cells was found in all strains, but can be acquired by recombinants with H9N2 or H7N3 or H3N2 etc. endemic human stains that can also coinfect pigs, birds, agricultural animals, and animals in the wild. Until fall 2008, the avian flu did not optimally replicate unless it was at 106 degrees or higher, but now it has acquired the capacity to replicate easily at 98.6 Farhenheit. Drug resistance to Amantadine, Tamiflu also are the predominant strains. The current swine flu is analagous to a early 20th century steamer trunk, with stickers showing the visited countries and coastal cities. It has stamps from Asia, North America, Avian, Swine and Human genetics. This is a “Lab Creation”. Now, we must understand that this virus is behaving as if it is more lethal per case that usual flu, and can recombine in pigs, wild and domestic birds, and other animals and can thus acquire PB2 deletions, NS1 gene polymorphisms, and the polybasic six amino acids that allow it to grow in brain and CNS as well as any other target organ in human and animal hosts. The NS1 deletion of four amino acids bypasses IL4, and thus is much more lethal with massive cytokine release at end stages. Because Avian H5N1 and the 1918 Swine Flu targeted young healthy people, the release of cytokines was more violent in the most healthy. This first wave is likely to recombine and after Phase 1 gene to population insertion, Phase 2 will result in new superstrains with additional genetic polymorphisms allow transfer efficiently to humans. Phase 2 is the bioreactor phase. In the emergent or Phase 3, new viral Clades of Swine /Avian hybrids will then have more efficient spreading and higher spontaneous lethality. 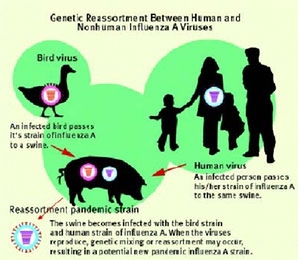 WHO Watchdog and Author of Pandemic FLU!

Human Life International invited Dr Bill Deagle MD to speak, March 1997, to the International Board of Doctors and Scientists. After my two hour talk, the board sat me down for a presentation of a foot of documents. Included were three distinct biological programs. The first was a plasmid anti-HCG contaminated Tetanus Vaccine, to cause first trimester sterility by spontaneous induced miscarriage in the target populations of Subsharan Africa, Phillipines, and other target WHO UN high density population countries. The second program was the US Special Virus Project, with mycoplasma RNA oncogenic viruses to cause immune failure, and premature death. It was knows as the AIDS syndrome, and was a recombinant of Visna, Green Monkey and Feline leukemia retro-RNA viruses carried by host mycobacteria. Most important as the large packet of documents on the Avian Flu Project, funded by the Rothchilds and oversean by the WHO and UN. They were in process of obtaining gene fragments from deceased whalers in Alaska with the CDC and Natl Institute of Allergy and Infectious Disease, supercomputer remodeled and bioengineered resurrection of the 1918 Swine Flu. They planned to insert into the genome Avian genes and spray into Asian bird populations, which would later be a gene pool when spread was complete to all continents for a new Swine-Avian Flu Pandemic. We now see the H1N1 flu in Mexico, Canada, UK, Italy, USA and perhaps other locations, rapidly evolving. This wave is quite lethal, but with the H5N1 genetics in the wild, it is likely to come in future waves with yet more lethal genes and more rapid spread. Certainly, in the next 7 days, the presence in multiple countries, US Pandemic Flu Alert, WHO raised from 3rd to 4th level, and the pronouncements for a decade plus of coming Pandemic Flu, this was totally a UN WHO plot to release a virus that would cull the human herd. Martial law will come with this or future waves in the next several months. This is the Final END GAME of the Global Elite, to fullfill Global 2000, NSSM 1974 population threat alerts, 1996 UN Population control documents, all calling for massive reduction in World Human Populations. Last week, the UK Prime Minister Gordon Brown called for a reduction from 60 to 30 million.

Mon Apr 27 , 2009
Alexander Haislip Reuters Sunday, April 26, 2009 The swine flu outbreak is likely to benefit one of the most prolific and successful venture capital firms in the United States: Kleiner Perkins Caufield & Byers, Thomson Reuters Private Equity Week reported on Friday. Shares of the two public companies in the […]