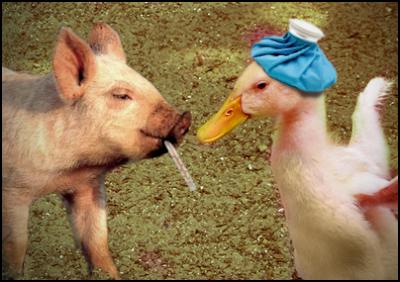 Interesting that John Key began his press conference on Monday by covering off the politics of the swine flu epidemic first. No false modesty from him. New Zealand’s response, he claimed, had been swift, thorough and appropriate.

With the nation thus assured of his government’s performance, Key moved onto the matter of the public’s safety, should things from this fine, fine start, get a lot worse. Not an easy call to make. So far, the swine flu story has unfolded globally in such a fuzz of inadequate information that the panic! and don’t panic! buttons seem to be being pushed virtually at random.

One core question has been why, so far , the death toll in Mexico is higher than anywhere else. A death toll of 150 has so far been cited in some reports, though the confirmed figure of swine flu deaths is far lower. On Sunday, Mexican President Felipe Calderon made the case for the flu’s effects being not very severe – by claiming that of the 1,324 patients who had been identified with flu-like symptoms up until the day before, some 929 had been treated and released from hospital. Even if those figures have not simply been plucked out of the air (and they may well have been) the fact remains that so far, it is only in Mexico that swine flu victims have died.

For the rest of the article, go here.

Fri May 1 , 2009
Telegraph.co.uk Honda, the Japanese car company, said it was suspending all overseas trips for employees, while the FTSE 100 listed mining company Fresnillo said it was postponing “non-urgent” travel Nokia, Samsung Electronics, Hon Hai, Swiss Re and Adidas were among other companies to place restrictions on travel. If the trend […]