HSBC earned more than £650m in fees from work for Textron, US manufacturer of cluster weapons

The deadly trade in cluster bombs is funded by the world’s biggest banks who have loaned or arranged finance worth $20bn (£12.5bn) to firms producing the controversial weapons, despite growing international efforts to ban them.

HSBC, led by ordained Anglican priest Stephen Green, has profited more than any other institution from companies that manufacture cluster bombs. The British bank, based at Canary Wharf, has earned a total of £657.3m in fees arranging bonds and share offerings for Textron, which makes cluster munitions described by the US company as “leaving a clean battlefield”.

HSBC will face protests outside its London headquarters today.Goldman Sachs, Bank of America, JP Morgan and UK-based BarclaysBank are also named among the worst banks in a detailed 126-page report by Dutch and Belgian campaign groups IKV Pax Christi and Netwerk Vlaanderen.

Goldman Sachs, the US bank which made £3.19bn proft in just three months, earned $588.82m for bank services and lent $250m to Alliant Techsystems and Textron.

Of the banks named, only Barclays was prepared to comment. It said: “Barclays group provides financial services to the defence sector within a specific policy framework. It is our policy not to finance trade in nuclear, chemical, biological or other weapons of mass destruction.

“Our policy also explicitly prohibits financing trade in landmines, cluster bombs or any equipment designed to be used as an instrument of torture.” A spokeswoman added that Barclays had supplied money to Textron, which makes cluster bombs, but that the US firm was a broad-based weapons manufacturer.

Last December 90 countries, including the UK, committed themselves to banning cluster bombs by next year. But the US was not one of them. So far 23 countries have ratified the convention. The UK has yet to do so, but the Foreign Office confirmed that it would form part of the government’s legislative programme before the next election.

A Foreign Office spokesman said the tightest export control order had been placed on cluster bombs, which extended to banks supplying money to manufacturers. The government was aware the control order was not working and “is working on it”.

Esther Vandenbroucke, of Netwerk Vlaanderen and one of the report’s authors, said: “The responsibility to ban cluster munitions is a shared responsibility. It requires courage, and it requires an effort. We are just months away from an international treaty entering into force and it is time for signatory states to the Convention on Cluster Munitions for non-signatory states and for financial institutions to act now.”

Last December, the New Zealand government’s pension fund sold shares in Lockheed Martin because of its link to the manufacture of cluster bombs.

Similar actions have been taken by the Irish and Dutch governments.

Millions of people will be endangered by up to tens of millions of cluster bomblets that have not yet exploded, causing lasting economic and social harm to communities in more than 20 countries for decades to come, campaigners have warned. The vast majority of cluster bomb casualties occur while victims are carrying on their daily lives.

On Monday, a Lebanese 20-year-old man had his leg amputated after a cluster bomb exploded in southern Lebanon Houla village. A security source said he was collecting wood in his border village when the explosion occurred.

The Israeli army made extensive use of cluster bombs during the war in south Lebanon three years ago. 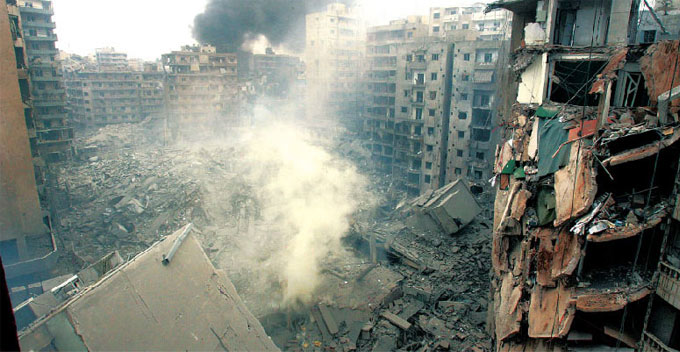 Cluster bombs were most recently used by both the Georgians and the Russians in the dispute over South Ossetia. They were also used in the Iraq and Afghanistan invasions.