Submitted by Florida Vets for Peace

There are two kinds of courage in war – physical courage and moral courage. Physical courage is very common on the battlefield. Men and women on both sides risk their lives, place their own bodies in harm’s way. Moral courage, however, is quite rare. According to Chris Hedges, the brilliant New York Times war correspondent who survived wars in Latin America, Africa, the Middle East and the Balkans, “I rarely saw moral courage. Moral courage is harder. It requires the bearer to walk away from the warm embrace of comradeship and denounce the myth of war as a fraud, to name it as an enterprise of death and immorality, to condemn himself, and those around him, as killers. It requires the bearer to become an outcast. There are times when taking a moral stance, perhaps the highest form of patriotism, means facing down the community, even the nation.”

The Winter Soldier investigation was followed by the publication of COLLATERAL DAMAGE: AMERICA’S WAR AGAINST IRAQI CIVILIANS, by Chris Hedges and Laila Al-Arian. Based on hundreds of hours of taped interviews with Iraqi combat veterans, this pioneering work on the catastrophe in Iraq includes the largest number of eyewitness accounts from U.S. military personnel on record.

The Courage to Resist

We cannot understand the psychological and moral significance of military resistance unless we recognize the social forces that stifle conscience and human individuality in military life. Gwen Dyer, historian of war, writes that ordinarily, “Men will kill under compulsion. Men will do almost anything if they know it is expected of them and they are under strong social pressure to comply.” “Only exceptional people resist atrocity,” writes psychiatrist Robert Lifton.How much easier it is to surrender to the will of superiors, to merge into the anonymity of the group. It takes uncommon courage to resist military powers of intimidation, peer pressure, and the atmosphere of racism and hate that drives all imperial wars.

Silencing the Witnesses to War

War crimes are collective in nature. Especially in wars based on fraud, soldiers are expected to lie – to their country, to their community, even to themselves. The silencing process begins on the battlefield in the presence of officers, power-holders who seek to nullify the perceptions and personal experience of troops under their command.

In his war memoir, Aidan Delgado describes attempts of his commanders to suppress the truth about Abu Ghraib. First his captain says the Army has nothing to hide, Abu Ghraib is just a rumor. But then the captain continues: “We don’t need to air our dirty laundry in public. If you have photos that you’re not supposed to have, get rid of them. Don’t talk about this to anyone, don’t write about it to anyone back home.” In the U.S. military, the truth is seditious.

Two years ago, Marine Sergeant Jimmy Massey published his riveting autobiography (written with Natasha Saulnier) in France and Spain. How the Marine Corps – through indoctrination and intimidation – transforms a homeboy from the Smoky Mountains of North Carolina into a professional killer who murders “innocent people for his government” is the subject of Massey’s unsettling, impassioned, Jar-head raunchy, and ultimately uplifting memoir, COWBOYS FROM HELL. (No U.S. publisher has picked up the book. A Marine who speaks truth to power is not without honor save in his own country.) In Chapter 18, Jimmy describes a seemingly minor encounter with his captain. Here Massey gives us a look into the process of human denial in its early phase.

Massey has just participated in a checkpoint massacre of civilians. His sense of decency, his sanity, is still in tact. Like any normal human being, he is distraught. The carnage of the war, the imbalance of power between the biggest war machine in history and a suffering people devoid of tanks and air power – the sheer injustice of it all – begins to take its toll on Massey’s conscience.

In the wake of the horrific events of the day, his captain is cool. He walks up to Massey and asks; “Are you doing all right, Staff Sergeant?” Massey responds: “No, sir. I am not doing O.K. Today was a bad day. We killed a lot of innocent civilians.”

Fully of aware of the civilian carnage, his captain asserts: “No, today was a good day.”

Relatives wailing, cars destroyed, blood all over the ground, Marines celebrating, civilians dead, and “it was good day”!

The Massey incident goes beyond the mendacity of military life. It concerns the control, the dehumanization of the psyches of our troops.

As one Vietnam veteran put it years ago: “They kept fucking with my mind.”

In 1994 Jonathan Shay, staff psychiatrist in the Department of Veterans Affairs, published a pioneering work on post traumatic stress – Achilles in Vietnam: Combat Trauma and the Undoing of Character. According to Shay, who recorded volumes of testimony from Vietnam veterans, commanders routinely try to efface the perceptions and the normal feelings of compassion among American troops. Military necessity, including the ever-present need for political propaganda, determines what is perceived, and how it is perceived, in war.

It was an extremely common experience in Vietnam, Shay writes, to be told by military superiors dealing with crime and trauma: “You didn’t experience it, it never happened, and you don’t know what you know.” And it was fairly common for traumatized soldiers to say to reporters: “It didn’t happen. And besides, they had it coming.” Shay recorded the testimony of one veteran who, in great anger, describes the pressures to alter his perceptions of collective murder.

“Daylight came, and we found out we killed a lot of fishermen and kids…You said to the team, ‘Don’t worry about it. Everything’s fucking fine.’ Because that’s what we were getting from upstairs. The fucking colonel says, ‘Don’t worry about it. We’ll take care of it. We got body count.’ They’d be handing out fucking medals for killing civilians. So in your mind you’re saying, ‘Ah, fuck it, they’re just gooks.’

I was sick over it, after this happened. I actually puked my guts out…But see, it’s all explained to you by captains and colonels and majors. ‘Fuck it, they was suspects anyways. You guys did a great job. Erase it. It’s yesterday’s fucking news.'”

The collective process of denial on the battlefield eventually extends to the homeland. Returning soldiers, to be sure, are often honored, but only so long as they remain silent about the realities, the pathos, the absurd evils of war. Willful public ignorance is a source of pain for veterans.

Ernest Hemingway’s brilliant short story, Soldier’s Home, published in 1925 after World War I, gives us insight into the reluctance of civilians to address the psychic needs of soldiers back from war.

The simply told story is about a young man named Krebs who returns to his home in Oklahoma. At first Krebs does not want to talk about the war. But soon he feels the need to speak – to his family, his neighbors and friends. But as Hemingway tells us, “Nobody wanted to hear about it.” His town did not want to learn about atrocities, and “Krebs found that to be listened to at all he had to lie.”

There’s the rub. His ability to assimilate into civilian life depended on his willingness to fabricate stories about the war. Soldiers are not only expected to lie on behalf of the military during the course of war, they are also expected to participate in homecoming rituals that preserve the civilian fantasy of war’s nobility.

In Hemingway’s story, the pressure to lie is so powerful, Krebs begins to manufacture stories about his experiences in battle – just to get along, just be able to lead a normal life.

Repression, however, is a major cause of mental illness and loneliness. Krebs morale deteriorates. He sleeps late in bed. He loses interest in work. He withdraws into himself.

That’s all Hemingway tells us. It’s a quietly told story, all the more powerful for its understatement.

There is a connection between Hemingway’s war-informed fiction and real life. As Shay notes, there is a tension between a soldier’s need to communalize shame and grief and the unwillingness of civilians to listen to troops whom they sent into battle. One Vietnam veteran told the following story:

“I had just come back from Vietnam and my first wife’s parents gave a dinner for me and my parents and her brothers and their wives. And after dinner we were all sitting in the living room and her father said: ‘So, tell us what it was like.’ And I started to tell them, and I told them. And do you know that within five minutes the room was empty. They were all gone, except my wife. After that I didn’t tell anybody what I had seen in Vietnam.”
Welcome home, soldier. Now shut up. 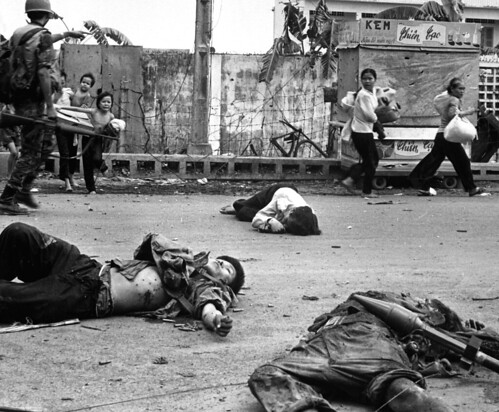 Notwithstanding clichés and pieties about support for troops, those who promote war are often the least likely to share the burdens and memories of war when soldiers return. When Ron Kovic, who was paralyzed from the chest down during the war in Vietnam, steered his wheelchair down the aisle of the Republican National Convention in 1972, the delegates spat on him and cheered for Nixon – “Four more years.”

W.D. Erhart, Vietnam veteran and author of Passing Time, never forgot the horrific episodes of his tour in Vietnam. In his first autobiography, he tells a friend about his speech at a Rotary Club. “I even put on a coat and tie and went to the Rotary Club. The Rotary Club, for chrissake. I laid it all out for ‘em. I told ‘em about search and destroy missions, harassment and interdiction fire, winning hearts and minds, all that stuff…Was I ever sharp that day.

“Now listen. You won’t believe this. I got done and nobody said a word. No applause. Nothing. Then this skinny old fart shaped like a cold chisel gets up and says he’s a retired colonel, and he thinks we should keep on pounding those little yellow bastards until they do what we say or we kill ‘em all, and he tells me I can’t be a real veteran because a real veteran wouldn’t go around badmouthing the good old U.S. of A., and the whole place erupts in thunderous applause.”
Welcome home, soldier. Now shut up.

Today Georgia Stillwell is a mother of a 21-year-old Iraqi war veteran. Her son is now homeless, unemployed, and despondent. Early one morning he drove his car over an embankment. She says that her son is a mere physical shell of himself. “My son’s spirit and soul must still be wandering the streets of Iraq.” It is not simply what happened in Iraq, but how veterans are treated at home when they seek to unburden their souls, that reinforces post-traumatic stress. On the night he drove the car off the road, he was crying, talking about the war. “His friends tell me he talks about the war. They describe it as ‘crazy talk.’ He wants the blood of the Iraqis he killed off his hands.” 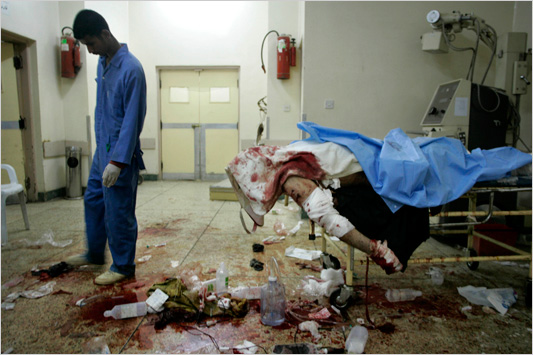 “Each generation,” writes Chris Hedges, “discovers its own disillusionment, often at a terrible price. And the war in Iraq has begun to produce legions of the lost and the damned.” For our morally courageous veterans – for all of us, really, who seek forgiveness – only the truth can heal.

BlackCommentator.com Guest Commentator, Paul Rockwell, is a writer living in the Bay Area. He is also a columnist for In Motion Magazine.

Your comments are always welcome.

Wed Nov 18 , 2009
Source: https://www.nzherald.co.nz/nz/news/article.cfm?c_id=1&objectid=10609888 Don’t be fooled – the smackers’ campaign is not an issue of constitutional importance. Child, Youth and Family Services reports about 13,000 New Zealand youngsters are abused each year. How humiliating to live in a country where $500,000 is being spent encouraging people to march up the main […]