Tony Blair told Fern Britton, in an interview to be broadcast on BBC1, that he would have found a way to justify the Iraq invasion.

Tony Blair has said he would have invaded Iraq even without evidence of weapons of mass destruction and would have found a way to justify the war to parliament and the public.

[ they should have called this  ‘Interview With a Bastard’

The former prime minister made the confession during an interview with Fern Britton, to be broadcast on Sunday on BBC1, in which he said he would still have thought it right to remove Saddam Hussein from power.

“If you had known then that there were no WMDs, would you still have gone on?” Blair was asked.

He replied: “I would still have thought it right to remove him [Saddam Hussein]”.

Significantly, Blair added: “I mean obviously you would have had to use and deploy different arguments about the nature of the threat.” He continued: “I can’t really think we’d be better with him and his two sons in charge, but it’s incredibly difficult. That’s why I sympathise with the people who were against it [the war] for perfectly good reasons and are against it now, but for me, in the end I had to take the decision.”

He explained it was “the notion of him as a threat to the region” because Saddam Hussein had used chemical weapons against his own people.

“This was obviously the thing that was uppermost in my mind.  The threat to the region.

[ …  followed closely by :  ‘The Theft of Mineral Wealth’ and ‘Regional Dominance’  ]

Also the fact of how that region was going to change and how in the end it was going to evolve as a region and whilst he was there, I thought and actually still think, it would have been very difficult to have changed it in the right way.”

Though Blair has always argued that Iraq would be better off without Saddam Hussein, to parliament and the public, he always justified military action on the grounds that the Iraqi dictator was in breach of UN-backed demands that he abandon his weapons of mass destruction (WMD) programme.

It is possible that Blair has shifted his ground in anticipation of his appearance early next year before the Chilcot inquiry. The inquiry has heard that Blair made clear to President George Bush at a meeting in Texas 11 months before the Iraq invasion that he would be prepared to join the US in toppling Saddam.

Blair was “absolutely prepared to say he was willing to contemplate regime change if [UN-backed measures] did not work”, Sir David Manning, Blair’s former foreign policy adviser, told the inquiry. If it proved impossible to pursue the UN route, then Blair would be “willing to use force”, Manning emphasised.

The Chilcot inquiry has seen a number of previously leaked Whitehall documents which suggest Blair was in favour of regime change although he was warned by Lord Goldsmith, the attorney general, in July 2002, eight months before the invasion, that “the desire for regime change was not a legal base for military action”.

Manning told Blair in March that year that he had underlined Britain’s position to Condoleezza Rice, Bush’s national security adviser.

“I said you [Blair] would not budge in your support for regime change, but you had to manage a press, a parliament, and a public opinion which is very different than anything in the States,” Manning wrote, according to a leaked Whitehall document. A Cabinet Office document also seen by the Chilcot inquiry, dated July 2002, stated: “When the prime minister discussed Iraq with President Bush at Crawford [his Texas ranch] in April, he said that the UK would support military action to bring about regime change provided that certain conditions were met: efforts had been made to construct a coalition/shape public opinion …”

Now Blair appears to be openly admitting that evidence of WMD – the purpose behind the now discredited weapons dossier he ordered to be published with the help of MI6 and Whitehall’s joint intelligence committee – was not needed to invade Iraq, and he could have found other arguments to justify it.

Blair did say in a speech to Labour party conference in 2004, over a year after the invasion: “I can apologise for the information [about WMDs] that turned out to be wrong, but I can’t, sincerely at least, apologise for removing Saddam.

“The world is a better place with Saddam in prison not in power.” 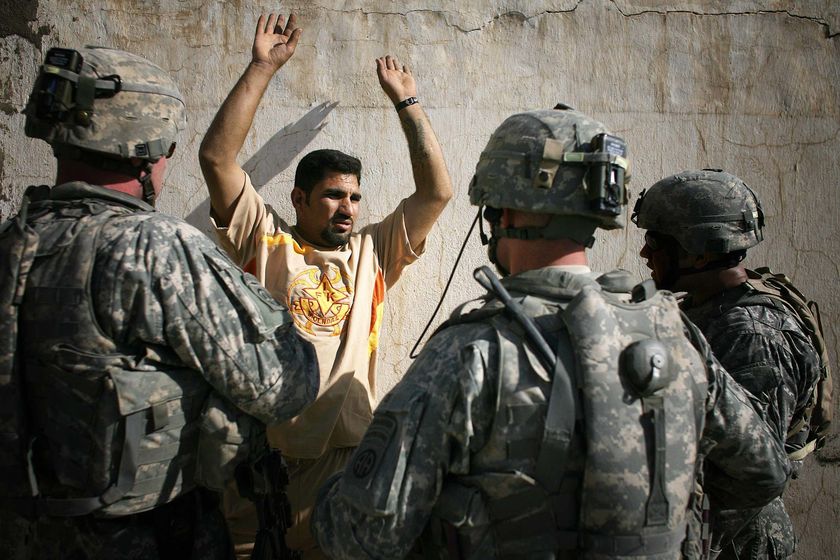 Blair told the former This Morning presenter how his religious beliefs helped him in the invasion’s immediate aftermath.

[ He must be a special fan of the ‘Old Testament’ version ]

“When it comes to a decision like that, I think it is important that you take that decision as it were on the basis of what is right, because that is the only way to do it,” he said.

“I think sometimes people think my religious faith played a direct part in some of these decisions. It really didn’t. It gives you strength if you come to a decision, to hold to that decision. That’s how it supports your character in a situation of difficulty.”

Most “really hard” decisions involved a “downside and an upside either way”, he added.

Sir John Sawers, Blair’s former chief foreign policy adviser and now head of MI6, told the Chilcot inquiry on Thursday that Iraq was one of several countries where Britain would have liked regime change. Discussions took place on “political” actions to undermine Saddam, including indicting him for war crimes, Sawers said. There was no talk in 2001 in Whitehall of military action, he added.

“There are a lot of countries … where we would like to see a change of regime.

That doesn’t mean one pursues active policies in that direction.”