An excerpt from the recently published book The Mother of All Battles: The Endless U.S.-Iraq War by Malcom Lagauche:

In December 2003, we all saw the photos of a disheveled Saddam Hussein after he was pulled out of a “spider hole” in a town near Tikrit. The administration laughed and the U.S. public made jokes about him and his hiding place.

The room was dirty. There was an empty can of Spam. The story was that he was holed up there and was totally irrelevant to Iraq.

His day was done and he was now in the hands of Iraq’s liberators.

What you saw wasn’t real.

Nothing of this scenario was true.

The UPI press release consisted of quotes from an ex-U.S. Marine of Lebanese descent, Nadim Rabeh. In addition to the U.S. version of the capture date being off by two days, during an interview in Lebanon, Rabeh stated:

I was among the 20-man unit, including eight of Arab descent, who searched for Saddam for three days in the area of Dour near Tikrit, and we found him in a modest home in a small village and not in a hole as announced. We captured him after fierce resistance during which a Marine of Sudanese origin was killed.

Rabeh recounted how Saddam fired at them with a gun from the window of a room on the second floor.

Then, the Marines shouted at him in Arabic, “You have to surrender. There is no point in resisting.”

How did we come to see the pictures of the hole and a scruffy-looking Saddam Hussein? According to Rabeh, “Later on, a military production team fabricated the film of Saddam’s capture in a hole, which was in fact a deserted well.”

The former Marine’s account mixes with the rendition Saddam Hussein gave his lawyer when they had their first meeting. Saddam told him that he was captured in a friend’s house and that he was drugged and tortured for two days, hence the pictures of Saddam looking bedraggled. 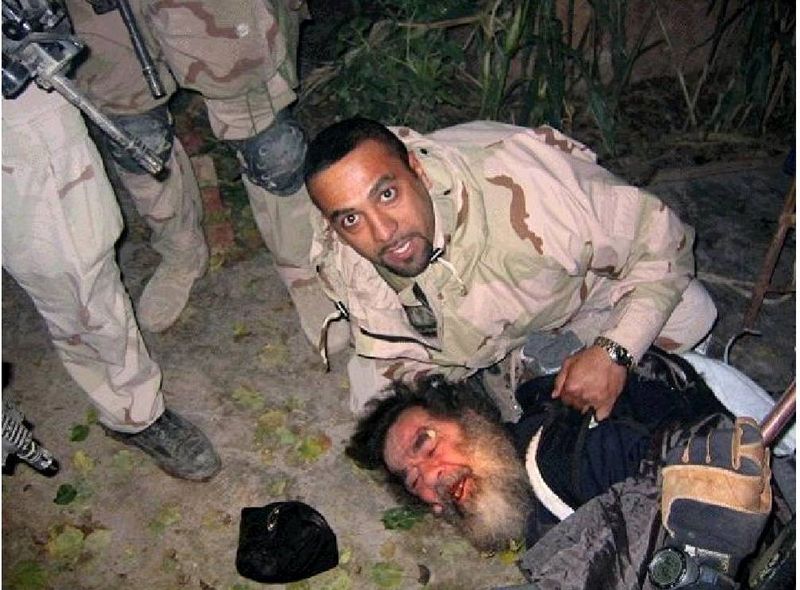 All the major news networks and publications showed pictures of the hole and a beleaguered Saddam: Time Magazine, CNN News, magazines, daily newspapers, etc. You name it and they published it. But, they were all wrong.

Not one publication took the time to research the story.

They ran the pictures supplied by the U.S. military and parroted the lines they were given.

This was not the first time something similar has occurred.

After the 1989 invasion of Panama, the U.S. allowed the press to enter Manuel Noriega’s office. He was portrayed as a sexual pervert. In the office were pictures of young boys, a picture of Hitler, red underpants and pornographic magazines.

A few months later, the first Marine to enter Noriega’s office was released from the Corps. He eventually talked to a reporter and gave his story of the encounter.

He maintained that the contents of the office included only a desk, a telephone, a chair, and a typewriter.

With Saddam, the props were changed. They were made to make Saddam look like a caged animal on the run who only had the basic elements to survive.

No one asked questions of what should have been obvious. For instance, how did Saddam Hussein come into possession of a can of Spam? There was absolutely no place in Iraq where Spam was sold. It contains pork, a food forbidden from a Moslem’s diet.

A few months after his capture, a picture was widely distributed that gained much publicity.

It showed a bunch of U.S. soldiers standing next to an Iraqi building on which a painted illustration depicted the blowing up of the World Trade Center.

The inference was that Iraqis took glee in the acts of the destruction of the World Trade Center on 9-11-2001.

If one looked close, it was evident that the soldiers were standing on the base path of a disused baseball field. There were no baseball fields in Iraq.

Upon closer scrutinizing, the trees were typical southeastern U.S. types that are not indigenous to Iraq.

The photo was bogus. It was filmed in the U.S., but, the harm had been done. Many news agencies had distributed the picture.

Its contents inflamed U.S. citizens even more about the Iraqi people.