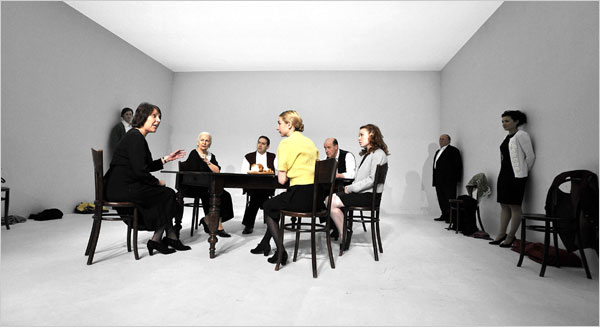 Seven Jewish Children: A Play for Gaza is a controversial six-page, 10-minute play by British playwright Caryl Churchill, written in response to the 2008-2009 Israel military strike on Gaza, and first performed at London’s Royal Court Theatre on 6 February 2009.

[ This is a performance of Caryl Churchill’s play in London ]

Churchill, a patron of the Palestine Solidarity Campaign, has said that anyone wishing to produce it may do so gratis, so long as they hold a collection for the people of Gaza at the end.

Seven Jewish Children consists of seven scenes spread over roughly seventy years, in which Jewish adults discuss what, or whether, their children should be told about certain events in recent Jewish history that the play alludes to only indirectly : The Holocaust, Jewish immigration to Palestine, the creation of Israel, the flight or expulsion of Palestinian Arabs, the 1948 Arab-Israeli War, the dispute over water, the First Intifada, the death of Rachel Corrie,[citation needed] the building of the West Bank barrier, the death of Muhammad al-Durrah,[citation needed] Palestinian suicide attacks, Hamas rocket attacks, and the 2008 bombing of Gaza.

The play takes the form of a litany, repeating the phrases “Tell her”, “Don’t tell her” to reflect the tension within Israel and the Jewish community over how to describe events in the Israeli-Palestinian conflict: “Tell her for miles and miles all round they have lands of their own/Tell her again this is our promised land/Don’t tell her they said it was a land without people/Don’t tell her I wouldn’t have come if I’d known/Tell her maybe we can share/Don’t tell her that.” Churchill has been particularly criticized for an angry monologue within the play purportedly representing a hardline Israeli view: “tell her I look at one of their children covered in blood and what do I feel? tell her all I feel is happy it’s not her / Don’t tell her that.”[1][2]

Reaction to the play has been mixed, within both Jewish and non-Jewish community.

The play is criticized by The Board of Deputies of British Jews as “anti-Israel”, and by Zionist Federation of Great Britain and Ireland as anti-semitic. While most of the original cast and director at Royal Court Theatre are Jewish themselves, Independent Jewish Voices sponsored and staged the play at Canada. Playwright Tony Kushner and academic Alisa Solomon, both Jewish-American critics of Israeli policy, argued that the play is dense, beautiful and elusive, and that “[a]ny play about the crisis in the Middle East that doesn’t arouse anger and distress has missed the point.”[2] What Strong Fences Make and Seven Other Children written as a response to the play. Churchill defended herself as calling “critics of Israel as anti-Semitic” is “the usual tactic” while the play is about “the difficulties of explaining violence to children.

In the early scenes, it is violence against Jewish people; by the end, it is the violence in Gaza.”

Christopher Hart of the The Sunday Times, condemning the play for its “straitjacketed political orthodoxy,” criticized Churchill’s “ludicrous and utterly predictable lack of even-handedness,” typical, he said, of the “enclosed, fetid, smug, self-congratulating and entirely irrelevant little world of contemporary political theatre.”[20] Theatre critic Jan Dalley of the Financial Times described the play as “agitprop” harking back to long-discredited revolutionary ideas,[21] similar to Bret Stephens‘s criticism in the Wall Street Journal. [22] and Susannah Clapp’s criticism in The Observer. [23] Jeffrey Goldberg of the Atlantic Monthly also calls the play a blood libel and said it was “the mainstreaming of the worst anti-Jewish stereotypes — for instance, that Jews glory in the shedding of non-Jewish blood — is upon us”.[24] Columnist Melanie Phillips wrote that the play is “An open vilification of the Jewish people… drawing upon an atavistic hatred of the Jews” and called it an “open incitement to hatred”.[25] Patrick Healy from The New York Times wrote that the play “at times paints heartless images of Israelis.”[26]

The Board of Deputies of British Jews, invited to preview the play, accused Churchill of being “Anti-Israel”.[27] Jonathan Hoffman, co-vice chairman of the Zionist Federation of Great Britain and Ireland, called the play “a libellous and despicable demonisation of Israeli parents and grandparents” and expressed fear that it would “stoke the fires of antisemitism“.

He added that the play is a modern blood libel drawing on old anti-Semitic myths.[25]

59 well-known British Jews published a letter published in the Daily Telegraph claiming that Seven Jewish Children reinforces “false stereotypes” and demonizing Israel for depicting Israelis as “inhuman triumphalists” who teach their children “Arabs must be hated”, while it is “historically inaccurate” since it “fails to say that the Six Day War was a defensive war” and it doesn’t contain Israel’s “withdrawal from Gaza in 2005 or “more than 6,000 rockets” launched by Hamas indiscriminately. Signatories included Professor Geoffrey Alderman, the Michael Gross Professor of Modern History at the University of Buckingham; Greville Janner, Baron Janner of Braunstone, the Labour peer and former president of the Board of Deputies; Maureen Lipman, the actress; Ronald Harwood, the Oscar-winning screenwriter; Tracy-Ann Oberman, the actress who starred in EastEnders.[28][29]

Playwright Israel Horovitz, who wrote a play in response to Churchill entitled What Strong Fences Make, argued that while it is possible to criticize Israel without being anti-Semitic and to criticize Palestine without being anti-Arab: “Those who criticize Jews in the name of criticizing Israel, as Ms. Churchill seems to have done in her play, step over an unacceptable boundary and must be taken to task.”[30]

[ The first performance of Caryl Churchill’s play in New Mexico ]

The Guardian theatre critic Michael Billington awarded the play four of five stars and wrote that the play captures the mood that has overtaken Israel, where security “has become the pretext for indiscriminate slaughter.”[14] “Mr. Billington’s sympathetic review describes the context of the cryptic play and points to some of the lines from the script that have disturbed readers like Mr. Goldberg.” [15] The Times‘s Dominic Maxwell also awarded the play four of five stars and praised it for an “impassioned response to the events in Gaza that is elliptical, empathetic and illuminating.”[16] In Saudi Arabian Saudi Gazette, London based freelance journalist Susannah Tarbush wrote that the play “succinctly dramatizes the tragedies and ironies of history for both sides”

[ The first performance of Caryl Churchill’s play in Israel ]

Writing in response to an article by Howard Jacobson which sought to place Seven Jewish Children and other criticism of Israel in the context of a rise in anti-Semitism,[35] Churchill defended herself: “Howard Jacobson writes as if there’s something new about describing critics of Israel as anti-Semitic. But it’s the usual tactic. We are not going to agree about politics … But we should be able to disagree without accusations of anti-Semitism.”

The play was about the difficulties of explaining violence to children.

[ The play performed outside the Arab-Hebrew Theater in Jaffa ]

Its length meant favourable and unfavourable information about Israel had been omitted, she said. “Jacobson seems to see the play from a very particular perspective so that everything is twisted … I don’t recognise the play from [his] description.” [36]

Churchill has said she sees the play as a political event.[7] Anyone wishing to produce it may do so for free so long as they take a collection for the people of Gaza after the performance, with proceeds to be sent to Medical Aid for Palestinians, a British medical aid and political advocacy organization.[8] She has made the script of the play available as a downloadable PDF on the website of the Royal Court Theatre.[9][10]

Wed Jan 20 , 2010
“It’s the biggest bank robbery in American history, but the banks are doing the robbing. I mean, just go through the facts. What, overnight in 2008 they turned Goldman Sachs, that venerable investment bank – how about casinos that gambled and lost – into a bank holding company. Why? Well, […]