as a result of the Anglo-American war of aggression against the oil-rich nation, a military crusade now in its 20th year. 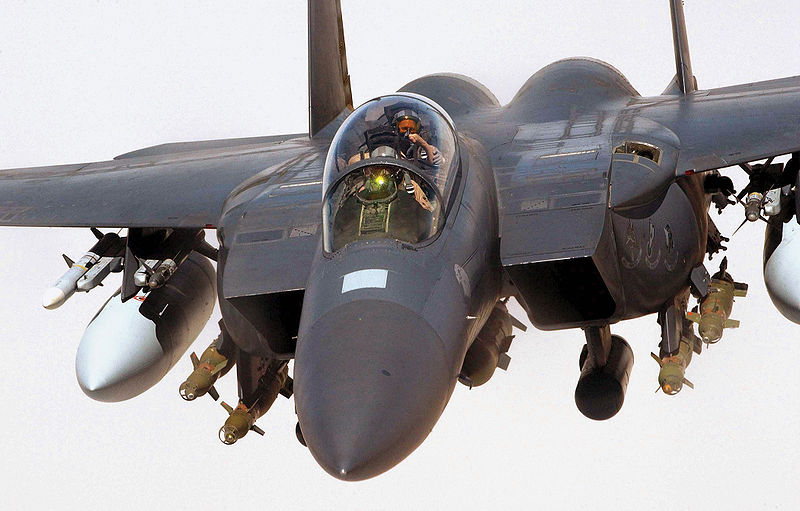 The recent Dutch judicial report from The Hague on the legal questions surrounding the Anglo-American invasion of Iraq in 2003 indicates that the war in Iraq can be legally defined as a “War of Aggression”, which is a “Crime Against the Peace” under the Nuremberg Charter.

The Anglo-American war against Iraq, which began on January 17, 1991, is now entering its 20th year.

The British have been trying to occupy Iraq for more than one hundred years.

Denis Halliday, the former Assistant Secretary General of the United Nations and Humanitarian Coordinator for Iraq (1997-98) explains the true nature of the military campaign against the people of Iraq.  As Halliday writes, he was compelled to resign from his position on moral grounds.  To participate in the UN program that had imposed “genocidal sanctions on the innocent of Iraq” would have “implied my complicity in human catastrophe,” Halliday wrote.
In the same newsletter, I also recommend reading the comments of Abdul Ilah Albayaty:
Instead of ending the occupation, handing Iraq to its people and punishing those responsible for this tragedy, instead of listening to the Iraqi people’s rights and demands, the Obama administration adopted the same strategy as Bush: trying to create a client state in Iraq by depending on the same corrupted backward forces that supported the occupation against the Iraqi people.
The only difference is that it tries to change the faces of its puppet government. The plunder, the corruption, the repression and the attempts to divide Iraq continue as before. Following one year of the Obama administration no change has taken place, despite the declarations and promises. 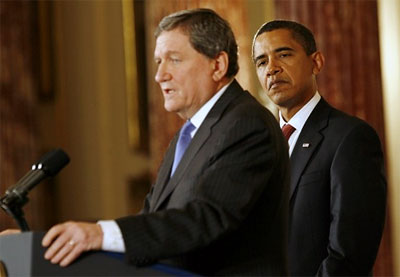 Why have the wars in the Middle East continued and increased under President Obama?  One year ago, Obama appointed Richard Holbrooke, Henry Kissinger’s right-hand man and partner-in-crime, to run the “War on Terror” as his envoy in Afghanistan and Pakistan.  The killing of innocent civilians has increased greatly under Holbrooke.  Kissinger is a key player in the Zionist shadow government behind the Obama administration.  Note the expression on Obama’s face. Kissinger and Holbrooke gave “The Kissinger Prize” to George H.W. Bush at the American Academy in Berlin, which they run together.
The elder Bush started the war in Iraq in 1991 and was the first president to use the expression “New World Order.”

A message from Denis Halliday
From the Brussels Tribunal Newsletter
January 10, 2010

Accepting the Gandhi International Peace Award in 2003, I explained my resignation from the United Nations as head of the UN Humanitarian Programme in Iraq at end 1998. I indicated that resignation was necessary because of my refusal to accept Security Council orders that continued to impose genocidal sanctions on the innocent of Iraq. My continuation would have implied my complicity in human catastrophe. And, in addition, my innate sense of justice was outraged — as yours would have been in my position — by the violence that UN sanctions had brought upon the lives and wellbeing of children, families, and the many loved ones of Iraq.

There can be no justification for killing the young, the aged, the sick, the rich, the poor anywhere, under any circumstances, least of all by the United Nations.

Some will tell you that the Iraqi leadership was punishing the Iraqi people. That was not my perception or experience when living in Baghdad in 1997-98 and traveling throughout the country. And were that to be the case, how could that possibly justify collective punishment — that is sanctions, by the United Nations? The UN Charter and international law have no provision for the murderous consequences of a UN embargo, over 12 long years in the case of the people of Iraq.

After leaving, sometimes I explained the impact of sanctions to the media, and to university and public meetings by describing Iraqi children as being on death row without hope of reprieve. By the end of 1998, we — the UN — had killed hundreds of thousands without any apparent hesitation on the part of the permanent member states of the Security Council.

The illegal invasion and occupation of Iraq in 2003 has only worsened the overall situation for Iraqi children, women and men. Contrary to what the mainstream media has been and is reporting, a whole nation is being terrorized, killed, driven into exile. The humanitarian situation in Iraq is catastrophic according to the ICRC (The Red Cross) and other international organizations. American imposition of “democracy and freedom” has failed as law, order and economic and social wellbeing is increasingly elusive. Health and educational systems are about to collapse; the human rights situation is disastrous; human security and opportunities have vanished; the fearful, the refugees and the displaced outnumber those enjoying normal lives.
Since the Iraqi government reintroduced capital punishment in 2004, an unknown number of people have been hanged. None of the condemned appears to have had a fair trial. Sadly, the Iraqi judicial system has been deemed by responsible international agencies and human rights organizations to be corrupt, dysfunctional and plagued by sectarianism.
And now the Presidential Council of Iraq has reportedly ratified the death sentences of some 900 detainees languishing on death row. Some 17 of them are confirmed to be women. The apparent collapse of justice in Iraq today needs to be seen in the context of an almost total breakdown of law and order since the US/UK invasion, including the war crimes, atrocities, killing of civilians by invading and occupying US mercenaries and military forces.

I oppose the use of the death penalty wherever it occurs on the grounds that it is contrary to fundamental human rights.
The international community that has already totally failed the Iraqi people has a compelling obligation to condemn the appalling human consequences of illegal invasion and occupation, and condemn — surely the Iraqis have suffered enough — one of the highest rates of execution in the world.
Without your voice the deadly increasing spiral of killing will continue.
That’s why I join the Brussells Tribunal in denouncing executions.
I would very much appreciate it if you would read the following statement against the imminent hanging of 900 detainees: https://brusselstribunal.org/DeathPenalty121209.htm and sign the call to stop these executions and request that the Iraqi government impose a moratorium on the death penalty.
Thank you on behalf of the Brussells Tribunal and all of us who care about justice and human life.
Denis J. Halliday
Former UN assistant secretary general and UN humanitarian coordinator for Iraq, 1997-98
Recipient of the 2003 Gandhi International Peace Award — Ireland
Source: Brussels Tribunal Newsletter, January 10, 2010
https://www.brusselstribunal.org/
Source

Thu Jan 28 , 2010
( music break ) from tomandandy, Bret Easton Ellis,  and one of the creative brains behind ‘Pulp Fiction’ comes one of the hardest montages ever montaged. [ this is what an American O.E. looks like – R-18 Rating please so don’t click if you aren’t  ] [youtube]QVaSCBzTCIE[/youtube]