[ This from Chris Hedges,  Journalist (a real one),  former war correspondent,  and author of the excellent ‘War : A Force That Gives Us Meaning’ – A book that should be required reading for every single human being walking around on this planet that all of us are standing on]

Reporters who witness the worst of human suffering and return to newsrooms angry see their compassion washed out or severely muted by the layers of editors who stand between the reporter and the reader. 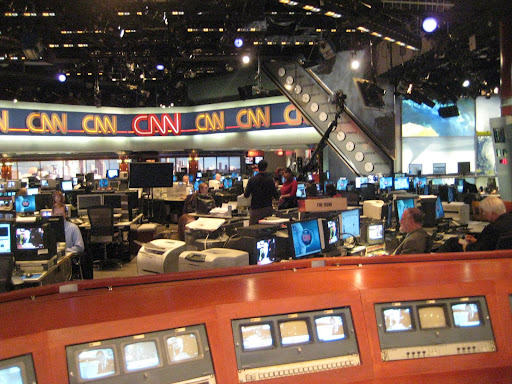 The creed of objectivity and balance, formulated at the beginning of the 19th century by newspaper owners to generate greater profits from advertisers, disarms and cripples the press.

[ … which is why the press is currently crap ]

And the creed of objectivity becomes a convenient and profitable vehicle to avoid confronting unpleasant truths or angering a power structure on which news organizations depend for access and profits. This creed transforms reporters into neutral observers or voyeurs. It banishes empathy, passion and a quest for justice. Reporters are permitted to watch but not to feel or to speak in their own voices.

They function as “professionals” and see themselves as dispassionate and disinterested social scientists.

This vaunted lack of bias, enforced by bloodless hierarchies of bureaucrats, is the disease of American journalism.

“The very notion that on any given story all you have to do is report what both sides say and you’ve done a fine job of objective journalism debilitates the press,” the late columnist Molly Ivins once wrote. “There is no such thing as objectivity, and the truth, that slippery little bugger, has the oddest habit of being way to hell off on one side or the other: it seldom nestles neatly halfway between any two opposing points of view.

The smug complacency of much of the press—I have heard many an editor say, ‘Well, we’re being attacked by both sides so we must be right’—stems from the curious notion that if you get a quote from both sides, preferably in an official position, you’ve done the job. In the first place, most stories aren’t two-sided, they’re 17-sided at least.

In the second place, it’s of no help to either the readers or the truth to quote one side saying, ‘Cat,’ and the other side saying ‘Dog,’ while the truth is there’s an elephant crashing around out there in the bushes.”

This abject moral failing has left the growing numbers of Americans shunted aside by our corporate state without a voice. It has also, with the rise of a ruthless American oligarchy, left the traditional press on the wrong side of our growing class divide.

The elitism, distrust and lack of credibility of the press—and here I speak of the dwindling institutions that attempt to report news—come directly from this steady and willful disintegration of the media’s moral core.

This moral void has been effectively exploited by the 24-hour cable news shows and trash talk radio programs.

The failure of the fact-based press to express empathy or outrage for our growing underclass has permitted the disastrous rise of “faith-based” reporting. The bloodless and soulless journalism of the traditional media has bolstered the popularity of partisan outlets that present a view of the world that often has no relation to the real, but responds very effectively to the emotional needs of viewers.

Fox News is, in some sense, no more objective than The New York Times, but there is one crucial and vital difference.

Fox News and most of the other cable outlets do not feel constrained by verifiable facts.

Within the traditional news establishment, facts may have been self-selected or skillfully stage-managed by public relations specialists, but what was not verifiable was not publishable.

The cable news channels have cleverly seized on the creed of objectivity and redefined it in populist terms. They attack news based on verifiable fact for its liberal bias, for, in essence, failing to be objective, and promise a return to “genuine” objectivity.

Objectivity creates the formula of quoting Establishment specialists or experts within the narrow confines of the power elite who debate policy nuance like medieval theologians. As long as one viewpoint is balanced by another, usually no more than what Sigmund Freud would term “the narcissism of minor difference,” the job of a reporter is deemed complete. But this is more often a way to obscure rather than expose truth.

Reporting, while it is presented to the public as neutral, objective and unbiased, is always highly interpretive. It is defined by rigid stylistic parameters. I have written, like most other reporters, hundreds of news stories.

Reporters begin with a collection of facts, statements, positions and anecdotes and then select those that create the “balance” permitted by the formula of daily journalism.

The closer reporters get to official sources, for example those covering Wall Street, Congress, the White House or the State Department, the more constraints they endure.

When reporting depends heavily on access it becomes very difficult to challenge those who grant or deny that access.

This craven desire for access has turned huge sections of the Washington press, along with most business reporters, into courtiers.

The need to be included in press briefings and background interviews with government or business officials, as well as the desire for leaks and early access to official documents, obliterates journalistic autonomy.

“Record the fury of a Palestinian whose land has been taken from him by Israeli settlers—but always refer to Israel’s ‘security needs’ and its ‘war on terror,’ ” Robert Fisk writes. “If Americans are accused of ‘torture’, call it ‘abuse’. If Israel assassinates a Palestinian, call it a ‘targeted killing’. If Armenians lament their Holocaust of 1,500,000 souls in 1915, remind readers that Turkey denies this all too real and fully documented genocide.

If Iraq has become a hell on earth for its people, recall how awful Saddam was.

If a dictator is on our side, call him a ‘strongman’.

If he’s our enemy, call him a tyrant, or part of the ‘axis of evil’.

And above all else, use the word ‘terrorist.’

“Ask ‘how’ and ‘who’—but not ‘why’,” Fisk adds. “Source everything to officials: ‘American officials’, ‘intelligence officials’, ‘official sources’, anonymous policemen or army officers. And if these institutions charged with our protection abuse their power, then remind readers and listeners and viewers of the dangerous age in which we now live, the age of terror—which means that we must live in the Age of the Warrior, someone whose business and profession and vocation and mere existence is to destroy our enemies.”

“In the classic example, a refugee from Nazi Germany who appears on television saying monstrous things are happening in his homeland must be followed by a Nazi spokesman saying Adolf Hitler is the greatest boon to humanity since pasteurized milk,” the former New York Times columnist Russell Baker wrote. “Real objectivity would require not only hard work by news people to determine which report was accurate, but also a willingness to put up with the abuse certain to follow publication of an objectively formed judgment.

To escape the hard work or the abuse, if one man says Hitler is an ogre, we instantly give you another to say Hitler is a prince.

A man says the rockets won’t work? We give you another who says they will.

The public may not learn much about these fairly sensitive matters, but neither does it get another excuse to denounce the media for unfairness and lack of objectivity. In brief, society is teeming with people who become furious if told what the score is.”

Journalists, because of their training and distaste for shattering their own exalted notion of themselves, lack the inclination and vocabulary to discuss ethics. They will, when pressed, mumble something about telling the truth and serving the public.

They prefer not to face the fact that my truth is not your truth.

News is a signal, a “blip,” an alarm that something is happening beyond our small circle of existence, as Walter Lippmann noted in his book  “Public Opinion.” Journalism does not point us toward truth since, as Lippmann understood, there is always a vast divide between truth and news. Ethical questions open journalism to the nebulous world of interpretation and philosophy, and for this reason journalists flee from ethical inquiry like a herd of frightened sheep.

Journalists, while they like to promote the image of themselves as fierce individualists, are in the end another species of corporate employees. They claim as their clients an amorphous public. They seek their moral justification in the service of this nameless, faceless mass and speak little about the vast influence of the power elite to shape and determine reporting. Does a public even exist in a society as fragmented and divided as ours? Or is the public, as Walter Lippmann wrote, now so deeply uninformed and divorced from the inner workings of power and diplomacy as to make it a clean slate on which our armies of skilled propagandists can, often through the press, leave a message?

The symbiotic relationship between the press and the power elite worked for nearly a century. It worked as long as our power elite, no matter how ruthless or insensitive, was competent. But once our power elite became incompetent and morally bankrupt, the press, along with the power elite, lost its final vestige of credibility. The press became, as seen in the Iraq war and the aftermath of the financial upheavals, a class of courtiers. The press, which has always written and spoken from presuppositions and principles that reflect the elite consensus, now peddles a consensus that is flagrantly artificial. Our elite oversaw the dismantling of the country’s manufacturing base and the betrayal of the working class with the passage of the North American Free Trade Agreement and the press dutifully trumpeted this as a form of growth. Our elite deregulated the banking industry, leading to nationwide bank collapses, and the press extolled the value of the free market. Our elite corrupted the levers of power to advance the interests of corporations and the press naively conflated freedom with the free market. This reporting may have been “objective” and “impartial” but it defied common sense. The harsh reality of shuttered former steel-producing towns and growing human misery should have, in the hands of any good cop reporter, exposed the fantasies. But the press long ago stopped thinking and lost nearly all its moral autonomy.

Real reporting, grounded in a commitment to justice and empathy, could have informed and empowered the public as we underwent a corporate coup d’etat in slow motion. It could have stimulated a radical debate about structures, laws, privilege, power and justice. But the traditional press, by clinging to an outdated etiquette designed to serve corrupt power structures, lost its social function. Corporations, which once made many of these news outlets very rich, have turned to more effective forms of advertising. Profits have plummeted. And yet these press courtiers, lost in the fantasy of their own righteousness and moral probity, cling to the hollow morality of “objectivity” with comic ferocity.

The world will not be a better place when these fact-based news organizations die. We will be propelled into a culture where facts and opinions will be interchangeable, where lies will become true, and where fantasy will be peddled as news. I will lament the loss of traditional news. It will unmoor us from reality.

The tragedy is that the moral void of the news business contributed as much to its own annihilation as the protofascists who feed on its carcass.

Thu Feb 4 , 2010
A recent poll has revealed more than half of Israelis approve of another attack on Gaza. [ Some Mo-fos just didn’t learn a damn thing from WWII as to how to treat other people ] That’s despite widespread international condemnation of last year’s offensive which killed more than 1300 Palestinians. […]