James Petras argues that Mossad’s murder of a Palestinian official in Dubai using stolen European passports presages an era of chaos in international relations and makes every European travelling in the Middle East suspected of links with Israeli death squads.

The evidence is overwhelming: The Dubai police presentation of detailed security videos of the assassins was corroborated by the testimony of Israeli security experts and applauded by Israel’s leading newspapers and columnists.

The Mossad openly stated that Mabhouh was a high priority target who had survived three previous assassination attempts.

Israel did not even bother to deny the murder.

Furthermore, the sophisticated communication system used by the killers, the logistics and planning surrounding their entry and exit from Dubai, and the scope and scale of the operation have all the characteristics of a high-level state operation.

Furthermore, only Mossad would have access to the European passports of its dual citizens!

Only Mossad would have the capacity, motivation, stated intent and willingness to provoke a diplomatic row with its European allies, knowing full well that Western European governments’ anger would blow over because of their deep links to Israel.

After meticulous investigation and the interrogation of two captured Palestinian Mossad collaborators, the Dubai police chief has stated he is sure the Mossad was behind the killing. 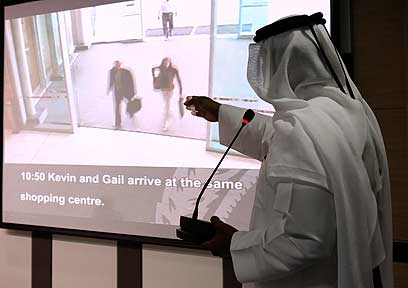 Israel’s policy of overseas assassination raises profound issues that threaten the basis of the modern state:

sovereignty, rule of law and national and personal security.

Israel has a publicly-stated policy of violating the sovereignty of any and all countries in order to kill or abduct its opponents.

In both proclamation and actual practice, Israeli law, decrees and actions abroad supersede the laws and law-enforcement agencies of any other nation.

If Israel’s policy becomes the common practice worldwide, we would enter a savage Hobbesian jungle in which individuals would be subject to the murderous intent of foreign assassination squads unrestrained by any law or accountable national authority.

Each and every state could impose its own laws and cross national borders in order to murder other nation’s citizens or residents with impunity.

Israel’s extra-territorial assassinations make a mockery of the very notion of national sovereignty.

Extra-territorial secret police elimination of opponents was a common practice of the Nazi Gestapo, Stalin’s GPU and Pinochet’s DINA and has now become the sanctioned practice of the US “Special Forces” and the CIA clandestine division.

Such policies are the hallmark of totalitarian, dictatorial and imperialist states, which systematically trample on the sovereign rights of peoples.
Israel’s practice of extra-judicial, extra-territorial assassinations, exemplified by the recent murder of Mahmoud al Mabhouh in a Dubai hotel room, violates all the fundamental precepts of the rule of law.

Extra-judicial killings ordered by a state, mean its own secret police are judge, jury, prosecutor and executioner, unrestrained by sovereignty, law and the duty of nations to protect their citizens and visitors.

Evidence, legal procedures, defence and cross examinations are obliterated in the process.

Liquidation of opponents abroad is the logical next step after Israel’s domestic show trials, based on the application of its racial laws and administrative detention decrees, which have dispossessed the Palestinian people and violated international laws.

The vast majority of Israelis proudly support these assassinations, especially when the killers escape detection and capture.

The unfettered operation of foreign state-sponsored death squads, carrying out extra-judicial assassinations with impunity, is a serious threat to every critic, writer, political leader and civic activist who dares to criticize Israel.

The precedent of Israel killing its adversaries abroad establishes the outer boundaries of repression by its overseas supporters in the leading Zionist organizations, most of whom have now and in the past supported Israel’s violation of national sovereignty via extra-judicial killings.

If Israel physically eliminates its opponents and critics, the 51 major American Jewish organizations economically repress Israel’s critics in the US.

They actively pressure employers, university presidents and public officials to fire employees, academics and professionals who dare to speak or write against Israeli torture, killing and systematic dispossession of Palestinians.

So far, most critical comments, in Israel and elsewhere, of Mossad’s recent murder in Dubai focus on the agents’ “incompetence”, including allowing their faces to be captured on numerous security videos as they clumsily changed their wigs and costumes under the camera gaze.

Other critics complain that the bungling Mossad is “tarnishing Israel’s image” as a democratic state and providing ammunition for the anti-Semites.

None of these superficial criticisms have been repeated by the US Congress, White House or the presidents of the major Jewish American organizations, where the mafia rule of Omerga, or silence, reigns supreme and criminal complicity is the rule.

While the critics bemoan the clumsy Mossad job, making it harder for Western powers to provide Israel with diplomatic cover for its operations abroad, the fundamental issue is never addressed: the Mossad’s acquisition and alteration of official British, French, German and Irish passports of dual Israeli citizen’s underlines the cynical and sinister nature of Israel’s exploitation of its dual citizens in the pursuit of its own bloody foreign policy goals.

Mossad’s use of genuine passports issued by four sovereign European nations to its citizens in order to murder a Palestinian in a Dubai hotel room raises the question of to whom “dual” Israeli citizens really owe their allegiance and just how far they are willing to go in defending or promoting Israel’s overseas assassinations.

Thanks to Israel’s use of British passports to enter Dubai and murder an adversary, every British businessperson or tourist travelling in the Middle East will be suspected of links to Israeli death squads.

With elections this year and the Labour and Conservative parties counting heavily on Zionist millionaires for campaign funding, it remains to be seen whether Prime Minister Gordon Brown will do more than whimper and cringe!

James Petras is a Bartle Professor (Emeritus) of Sociology at Binghamton University, New York. He is the author of 64 books published in 29 languages, and over 560 articles in professional journals, including the American Sociological Review, British Journal of Sociology, Social Research, Journal of Contemporary Asia and Journal of Peasant Studies. He has published over 2,000 articles.
Source

Tue Feb 23 , 2010
The International Monetary Fund operates primarily as a banker bailout machine. They cajole and tempt and confuse and threaten the leaders of governments worldwide to pay off the failed bets of the big bankers using the taxpayer funds of their countries. This has been going on a long time, at […]