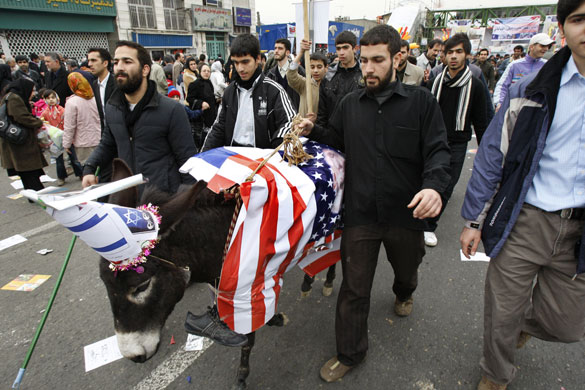 What can possibly justify the relentless U.S. diplomatic (and mainstream media) assault on Iran ?

It cannot be argued that Iran is an aggressive state that is dangerous to its neighbors, as facts do not support this claim.

It cannot be relevant that Iran adheres to Islamic fundamentalism, has a flawed democracy and denies women full western-style civil rights, as Saudi Arabia is more fundamentalist, far less democratic and more oppressive of women, yet it is a U.S. ally.

It cannot be relevant that Iran has, over the years, had a nuclear research program, and is most likely pursuing the capacity to develop nuclear weapons, as Pakistan, India, Israel and other states are nuclear powers yet remain U.S. allies

—indeed, Israel deceived the U.S. while developing its nuclear program.

The answer to the above-posed question is fairly obvious:

Iran must be punished for leaving the orbit of U.S. control.

Since the Islamic Revolution in 1979,

when the Shah was removed, Iran, unlike, say, Saudi Arabia,

i) Defiance of U.S. dictates affects the U.S.’s attainment of goals linked to Iran; and,

ii) Defiance of U.S. dictates establishes a “bad” example for other countries that may wish to pursue an independent course.

The Shah could commit any number of abuses

yet his loyalty to the U.S. exempted him from American condemnation

—yet not from the condemnation of the bulk of Iranians who brought him down.

The following quiz is an attempt to introduce more balance into the mainstream discussion of Iran.