The protestors began their demonstration with a march from Rabin Square to the Tel Aviv museum, where speeches were held. 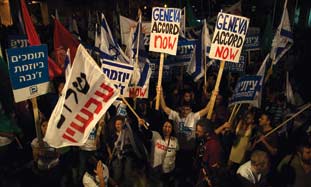 The demonstration, which was held under the slogan “The Government is Drowning Us All”, was originally planned solely to protest the occupation, but following last Monday’s deadly raid on a Turkish boat attempting to break the Gaza blockade, the rally also addressed those upset about the government’s policies in regard to the Gaza Strip and the raid that left 9 foreign citizens dead and several IDF soldiers wounded.

Israel vs The Rest Of Humanity

Sun Jun 6 , 2010
After the flotilla massacre, the Freedom of Palestine has become a human responsibility. The massacre on board the ‘Mavi Marmara’ in international territorial water in the early hours of June 1, 2010 will change the face of the conflict from an Arab Israeli conflict to a conflict between Israel and […]