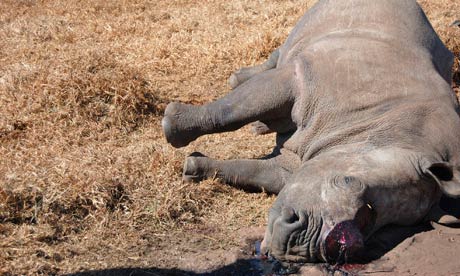 The last rhinoceros cow in Krugersdorp park, South Africa, bled to death on Wednesday after poachers hacked off her horn. Photograph: Reuters

South African wildlife experts are calling for urgent action against poachers after the last female rhinoceros in a popular game reserve near Johannesburg bled to death after having its horn hacked off.

Wildlife officials say poaching for the prized horns has now reached an all-time high. “Last year, 129 rhinos were killed for their horns in South Africa. This year, we have already had 136 deaths,” said Japie Mostert, chief game ranger at the 1,500-hectare Krugersdorp game reserve.

The gang used tranquilliser guns and a helicopter to bring down the nine-year-old rhino cow. Her distraught calf was moved to a nearby estate where it was introduced to two other orphaned white rhinos.

Wanda Mkutshulwa, a spokeswoman for South African National Parks, said investigations into the growing number of incidents had been shifted to the country’s organised crime unit. “We are dealing with very focused criminals. Police need to help game reserves because they are not at all equipped to handle crime on such an organised level,” she said.

Rhino horn consists of compressed keratin fibre – similar to hair – and in many Asian cultures it is a fundamental ingredient in traditional medicines.

Mkutshulwa said poaching was also rife in the Kruger Park. Five men were arrested there in the past week alone – four of whom were caught with two bloodied rhino horns, AK-47 assault rifles, bolt-action rifles and an axe.

Krugersdorp game reserve attracts at least 200,000 visitors every year. It is also close to a private airport, which may have been used by the poachers.

“The exercise takes them very little time,” Mostert said. “They first fly over the park in the late afternoon to locate where the rhino is grazing. Then they return at night and dart the animal from the air. The tranquilliser takes less than seven minutes to act.

“They saw off the horns with a chainsaw. They do not even need to switch off the rotors of the helicopter. We do not hear anything because our houses are too far away. The animal dies either from an overdose of tranquilliser or bleeds to death.”

The committee of the Convention on International Trade in Endangered Species (Cites) warned last year that rhino poaching had reached an all-time high. The Cites conference in Geneva in July 2009 heard that Asia’s economic expansion had fuelled the market in rhino horns. The horns are also used in the Middle East to make handles for ornamental daggers. Cites said demand for them had begun to soar in recent years. In the five years up to 2005, an average of only 36 rhinos had been killed each year.

Cites has praised South Africa for its action against poachers. Two weeks ago, a Vietnamese man was jailed for 10 years for trying to smuggle horns out of the country.

Wed Jul 21 , 2010
Source: rt.com A series of explosions believed to be the result of a terrorist attack has rocked the Baksan Hydropower station in Russia’s Republic of Kabardino-Balkaria. Two people were killed and two more injured in the incident. A group of terrorists forced their way into the territory of the power […]