9/11 was like Pearl Harbor to America, uniting many, awakening bitter skepticism in a few.

Where Pearl Harbor began America’s official role in crushing the Fascist juggernaut that threatened to dominate the world,

9/11 had quite the opposite effect.

America’s response to 9/11 was oppression at home and a tirade of frenzied phobic reactions around the world.

No American institution suffered more than the military. 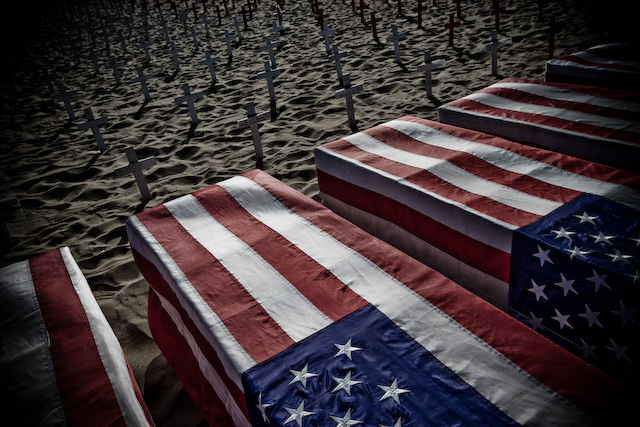 The team of Cheney and Rumsfeld,

together since the disastrous Nixon years,

began a process of purging America’s military of talent and leadership,

instead building a force to serve a sinister agenda of religious heresy and extremist politics.

it isn’t the economic collapse or the discredited military adventures that have now embittered a military leadership infrastructure that now sees itself as duped, dishonored and discarded.

A number of factors can be attributed,

the proverbial “straw that broke the camel’s back” as it were but it is 9/11 where things begin to fall apart.

a group of Muslims with box cutters and a few remarkably unproductive hours of pilot training,

America has had many airline hijackings,

despite the obfuscations of Donald Rumsfeld.

among themselves and their fellow officers,

doubts that began reaching a quiet crescendo pointing to 9/11 as an “inside job.”

With the dozens of conspiracy theories and a weak and implausible cover story,

one the 9/11 Commission itself eventually rejected,

only one plausible answer was left, an answer very much “not for public consumption.”

Few Americans know that a team of Israeli intelligence agents were arrested on 9/11 after being observed using “video” equipment to record the planes crashing into the towers.

After the disaster, the Mossad agents, soon to be arrested and released by the FBI, began celebrating as though they had completed a successful operation.

This enraged New Yorkers who mistook them for terrorists.

Only top members of America’s military knew the truth, the “dancing Israelis” had remotely guided the two planes into the World Trade Center, not simply videoing,

itself proof of guilt.

Military pilots, in particular, knew the planes were nearly impossible to maneuver at those speeds without Israeli designed auto-pilot systems,

not unlike those used on Tomahawk/Cruise missiles.

Behind a flurry of “conspiracy theories,”

some obvious to military leaders as part of an elaborate deception plan requiring widespread control of media assets,

The Untold History Behind The Downfall Of America

Fri Jul 23 , 2010
Very often, if you want an explanation for things that seem to be beyond explanation, you can profit from looking to the past. This interview – recorded nearly 30 years ago about events that took place over 60 years ago is one of the most remarkable bits of video I’ve ever seen. Must watching. Video: […]