A ship bearing aid for Gaza is preparing to leave Tripoli in Lebanon this weekend in the latest attempt to defy the Israeli blockade – with only women on board.

The Saint Mariam, or Virgin Mary, has a multi-faith international passenger list, including the Lebanese singer May Hariri and a group of nuns from the US. 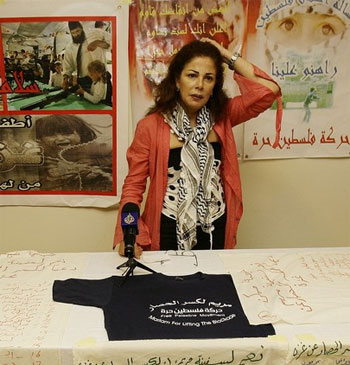 The co-ordinator of the voyage, Samar al-Haj, told the Guardian this week the Lebanese government had given permission for the boats to leave for Cyprus, the first leg of the journey, this weekend.

one of the participants who, along with the other women,

has adopted the ship’s name, Mariam.

The Mariam and its sister ship, Naji Alali, had hoped to set off several weeks ago but faced several delays after Israel launched a diplomatic mission to pressure Lebanon to stop the mission.

Palestinian Youth Shoot Back ~ With Camcorders

Tue Aug 10 , 2010
Every Friday, the slingshot-wielding boys, or shabab, of the West Bank village of Ni’lin hold a demonstration at Israel’s separation wall, which has deprived the village of 750 acres of farmland. But among the shabab are other youngsters with a different weapon — video cameras. “The films we are making […]