For those seeking life on Mars, it is the best of times and the worst of times.

Nearly 35 years after NASA’s twin Viking robots eased down onto its ruddy surface,

there is still no incontrovertible evidence that living organisms ever existed on the fourth planet from the sun.

The brief frenzy over possible fossils in a Mars meteorite has fizzled.

And even after billions of dollars’ worth of adorable rovers and eagle-eyed orbiters have prodded and probed the planet,

the results have been at best ambiguous and at times downright confusing. 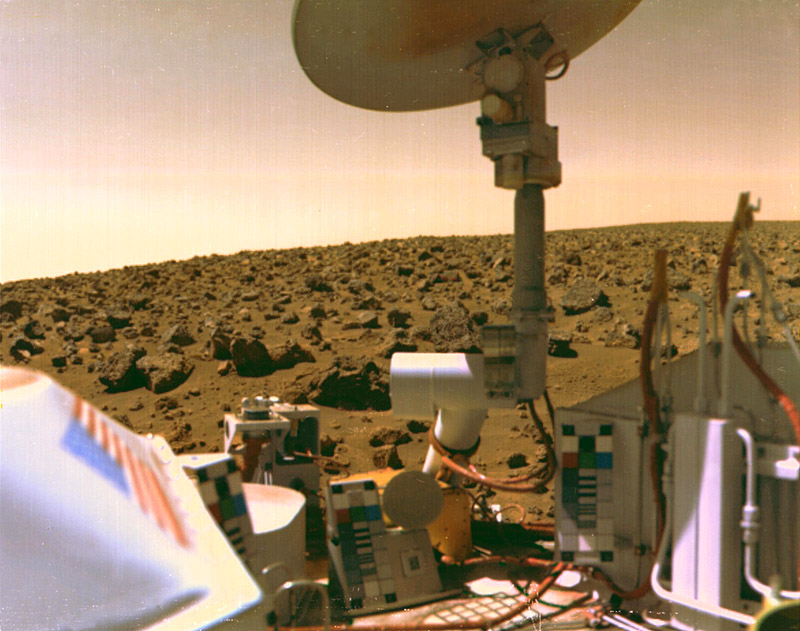 The first took a sample of Martian soil and dropped it into a generic nutrient solution tagged with a radioactive isotope and waited for radioactive gas to be released by metabolic processes.

This experiment showed a positive result for a while, then the reaction faded away.

The second experiment was an organic mass spectrometer

that heated a sample of Martian soil to cause large organic molecules to leave the soil and be drawn into a mass spectrometer,

but unlike the inorganic mass spectrometer

the heat was kept low enough to not cause the molecules themselves to come apart.

This experiment returned a negative for the organic molecules it was designed to detect.

NASA was faced with one positive and one negative result, and the positive result appeared to be fading.

Most of us sitting at those consoles were convinced the positive needed to be given priority.

NASA was under a huge amount of public pressure over the issue of life on Mars.

because the Bible did not mention it,

and life on other planets meant Earth was not special in the eyes of whatever gods were being prayed to.

Some of the controllers were getting death threats from fanatics like the Children of God.

The scientists with the PhDs were no longer in control,

but political appointees with MBAs ran the show,

and so a political decision was made to ignore the positive result,

rely on the negative,

and declare that Viking had not found any life on Mars at all.

That placated the masses at what we all felt was the expense of the truth.

subsequent probes to Mars have discovered a high amount of perchlorate in the Martian soil.

In the presence of heat, perchlorate will decompose organic molecules.

So the Viking organic mass spectrometer was destroying the organic molecules

before it ever had a chance to detect them.

That means the negative result was bogus data and can be discarded.

That leaves just one positive result, albeit a fading one.

and that the fading of the result could be explained by many things including unexpected long term toxicity of the nutrient solution,

or simply providing so much food that the microbes drowned in it or ate themselves to death.

Because Viking was searching for life,

the landers were autoclaved right on the launch pads,

to prevent a stowaway bacteria from Earth from contaminating the results.

Sadly, because NASA chose to ignore the positive result from Viking,

subsequent Martian landers were not sterilized.

it will be difficult making sure that they are indigenous to Mars and not a passenger from an earlier mission.

After all these years, any Earth bacteria that hitched a ride to Mars and adapted to that environment will have been blown all over the planet in the great dust storms.

But on the day indigenous life on Mars is proven past all doubt,

I will wag my finger at “New” NASA management

and at the buy-bull bangers they knuckled under to.

The forces that would take us back to the Dark Ages in a world lit only by fire and ruled by myths and legends of gods and demons were flat-out wrong.

They should stick to molesting children and leave the science to the rational humans.

Spies In Utah ~ Israeli "art students" At It Again

Sun Oct 3 , 2010
[ These pushy and ethno-centric supremists can be found sniffing around streets on New Zealand, too … …   bothering people …  ] [youtube]n6Rsq3eV1r4[/youtube]