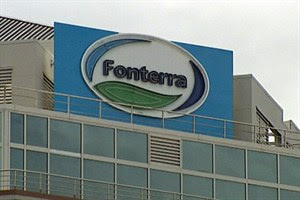 Fonterra commits Facebook suicide
Greenpeace says Fonterra has committed Facebook suicide because it was unable to answer questions posted on the site about its palm kernel feed.

But Fonterra has countered “they’ve never had an official Facebook page” and it doesn’t know who was running the one that was bombed with questions.

On the Facebook page there have been many comments that urge the dairy producer to stop importing palm kernel.

Fonterra is lying through their teeth, I’ve been to their facebook site, the entire site was about the products Fonteera sell, how that could have been set up randomly by someone else is just bullshit, they’ve pulled the site because it opened up a front of critical questions about rainforest destroying kernel feed for their dairy industry, lying about shutting it down and pretending they didn’t set it up is just so pathetic you understand how they got so burnt in the Chinese milk scandal.

While Fonteera lie about having a facebook account, the questions about feeding their cows rainforest destroying kernal feed mount while the boss at Fonteera gets caught out using abortion milk practices.

If Fonteera want to be a market leader they must be a better proponent for corporate responsibility.

The Dark Side Of United States' “Friendship” With South Africa

Fri Nov 5 , 2010
The dark side of United States’ “friendship” with South Africa Precipitating chaos and misery for African people. by M. J. Molyneaux The hidden agenda behind the humanitarian aid programs and interventions carried out by the United States in troubled parts of the worldhas been insightfully exposed by Dr Paul Craig […]