to be archived here a few hours after broadcast …

(read about it here, and listen here)

and mostly agreeing with each other.

During the second hour, we had a heated debate

about what happened to the Twin Towers: 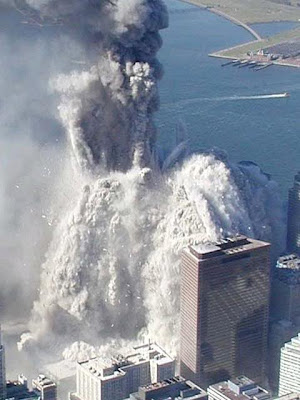 I argued that the controlled demolition hypothesis best explains the facts,

while Denis, who admits that WTC-7 was a controlled demolition,

claimed that the Towers could have collapsed due to plane crashes and fires as the government says.

But wait – what about the unexploded nanothermite chips

(making up as much as .1 percent of the WTC dust)

found by chemistry professor Niels Harrit and eight other scientists?

While I don’t know much about chemistry, I’m good at judging arguments.

Those who have attacked Dr. Harrit’s paper have used such blatantly bad arguments

as to have made a prima facie case that the paper is unassailable.

Let’s see whether Denis Rancourt, who knows something about nanotechnology, can do any better !

(I wonder whether he thinks it’s a coincidence that much of the NIST cover-up crew,

who pretended they had never heard of nanothermite, were in fact nanothermite experts ! )

Niels Harrit is an Associate Professor at University of Copenhagen.

He is an expert in organic chemistry, photochemistry, fluorescence, and nanotechnology,

and the lead author of a potentially historic scientific paper on nanothermite residues in World Trade Center dust.

Denis Rancourt was a tenured professor of physics at the University of Ottawa.

His activism on many issues,

including the conflict in Occupied Palestine,

Silence of the Bees

Wed Nov 10 , 2010
“In the winter of 2006, a strange phenomenon fell upon honeybee hives across the country. Without a trace, millions of bees vanished from their hives. A precious pollinator of fruits and vegetables, the disappearing bees left billions of dollars of crops at risk and threatened our food supply. The epidemic […]