[ Saw this last night and

– while it was technically and visually superb ? –

If you kind of, sort of liked the “Matrix” franchise but found it too fast-paced, too dense with plot

and way too short on neon-lit motorbike races and homoerotic Ultimate Frisbee tournaments,

then I’ve got a movie for you.

That movie is “TRON: Legacy,” a theoretically long-awaited sequel to an expensive flop that was released 28 years ago,

in the dawn of the computer age,

when the presumed target audience for this new movie had not yet reached zygote or embryo status,

and was swimming formless in the cybervoid of pre-existence.

– it’s a stupid question, and I’m not going to research it –

but it’s a hell of a long time to wait for a visual experience that resembles sticking your head into a barrel of ink full of those daylight-fluorescent glow sticks from the dollar store.

and I guess that was supposed to leave me with eyes bleeding, soul shattered and mind utterly blown.

I will admit, under protest, that some of the production design is impressive – in a hackneyed and boring idiom that channels almost every science-fiction film of the ’70s and ’80s about an outsider who penetrates an evil futuristic community. 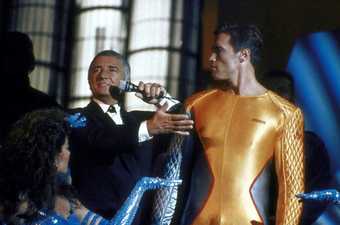 stir in a few extraneous elements like the Imperial Starfighters and the Batmobile,

and serve with some newfangled CGI effects

and a pace appropriate to the gamer audience’s presumed attention span,

well, hell, you’ve got this,

but I’m making it sound a lot more interesting than it is.

Inside The Moral Corruption Of Israeli Society

Fri Dec 17 , 2010
This was one of my first concrete experiences in the West Bank in which I was able to see just how soldiers viewed Palestinians. It was as if they were not fully human or at least, not as human as Jews. Read the rest here