Lawrence Davidson views the roots of the pro-democracy protests in Bahrain,

and argues that the double standards embodied in the US response

to the Bahraini regime’s violent suppression of the peaceful protests

can be directly linked not only to the desire to control the Gulf’s oil supplies,

but also to the fact that the Bahraini ruler is a self-proclaimed ally of Israel. 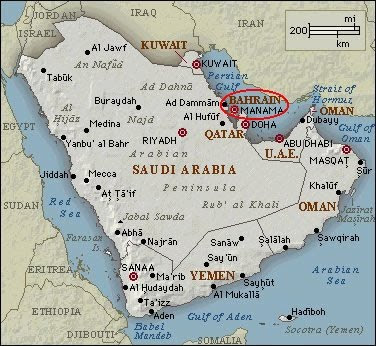 With the whole world’s attention focused attention on Japan and to a lesser extent Libya,

serious events are unfolding in Bahrain that have significant impact on the United States’ military posture in the Middle East.

The U.S. has had a significant naval presence since a build up that began in 1997.

It is now the home of U.S. Naval Forces Central Command.

As you can see from the map above,

the location of a naval base on the island in the middle of the Persian Gulf provides a significant strategic outpost.

Recent protests and riots pitting the the predominantly Shia population against the ruling Sunni royalty is complicating and already difficult picture for U.S. interests.

Further, the King had to call on the assistance of Saudi troops to restore order yesterday. Iran apparently sees this as an opportunity to make trouble for the U.S. by supporting the protesters and criticizing the use of Saudi troops.

Further underlining the regional implications of the unrest in Bahrain, Shiite power Iran denounced the intervention of foreign troops as “unacceptable” and predicted it would complicate the kingdom’s political crisis.

Iran holds no deep political ties to Bahrain’s Shiite groups, but some Iranian hard-liners have hailed their efforts over the years for greater rights for their community, which represents a majority of the nation’s population.

In the month of protests, the Shiite-led opposition is also pressing for political freedoms.

Thu May 12 , 2011
Wednesday, 04 May 2011 | Press Release Contact: Metiria Turei MP Tags: Mining, Energy, Environment, Economics, Marine and Oceans The Government confirmed today that New Zealanders will carry full financial liability and responsibility for containment and clean up if there is a catastrophic oil spill in deep water off the Canterbury Coast, said the Green Party. […]