Nothing bends one’s noodle quite like alternate reality literature.

– but it is a world that differs from the one we live in.

In the area of literary fiction – striking examples are

which posits an imagined 1885 England : the Industrial Revolution is in full and inexorable swing,

and a steam-driven, cybernetic, computer age arrives a century ahead of its time.

a 1960’s European murder mystery set against the ongoing backdrop of a Nazi victory in WWII.

Stephen King’s new novel about someone preventing the assassination of John Kennedy.

( & then promptly set about trying to secretly nuke each other ). 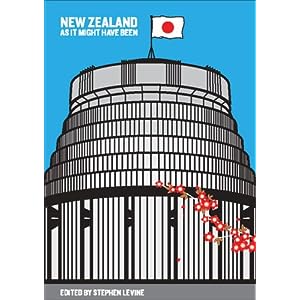 WHAT IF the Treaty of Waitangi had not been signed on 6 February 1840 ?

WHAT IF Maori had not been made British subjects in 1840 ?

WHAT IF Nelson had been made the capital of New Zealand ?

WHAT IF New Zealand had joined Australia in 1901 ?

WHAT IF the strikers at Waihi had triumphed ?

WHAT IF New Zealand soldiers had never fought at Gallipoli ?

WHAT IF Japan had invaded New Zealand ?

WHAT IF the Manapouri Power Project had never been constructed ?

WHAT IF Muldoon’s ‘think big’ energy projects had succeeded ?

WHAT IF the All Blacks had lost the final test against the Springboks in 1981 ?

WHAT IF the fourth Labour Government had allowed a visit by the USS Buchanan ?

… are all valid questions asked by

The original 2006 publication was so choice

that it spawned a sequel :

When Wikipedia No Longer Matters