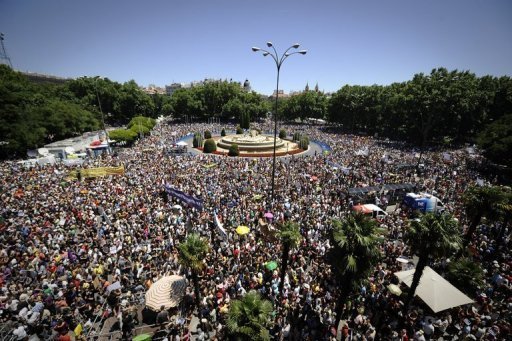 The revolutionary movement that began in Tunisia at the end of last year has now sparked mass movements in Europe.

Principally, to date, in Greece and Spain.

On the surface, these movements have little in common.

In Tunisia and Egypt,

the people came out in vast numbers to overthrow the hated dictators who,

had strangled their economies and presided over police states,

whereas in Greece and Spain,

the protestors are not seeking the overthrow of dictators,

and are not rebelling against a police state

(although both countries can draw on their relatively recent experience of dictatorship).

Beneath the surface discrepancies, however,

– not just because they are all,

without the kind of fixed organisational leadership

that has been behind previous revolutionary movements,

but also because they are all,

whether these involve dictators enriching themselves

at the expense of their people,

or the populations of European countries

that they have to pay for the excesses of their leaders and the banks.

Mon Jun 27 , 2011
https://www.youtube.com/watch?v=yL7LtnAITmA On Wednesday, June 22, Israel held the largest war exercise in its history. The Real News’ Lia Tarachansky interviewed Rela Mazali, a founder of New Profile, an organization working to demilitarize Israeli society, and Alex Cohn, a war resister who served five months for objecting to serve in […]