who is in charge of procurement,

gave a similar message to the House of Commons defence committee

and went further by saying that Ottawa reserves the right to bail on the multibillion-dollar program.

Senior officials say the Auditor-General’s harsh review is behind the Harper government’s change in posture over the last few weeks,

where a hard-line message of commitment

has softened into skepticism about the international program,

which is billions of dollars off target and years behind schedule.

The Conservative government’s plan has been to buy 65 of the radar-evading jets.

has recommended a U-turn on one of the most controversial proposals of the cost-cutting armed forces reforms,

the Guardian has learned.

which are under construction. 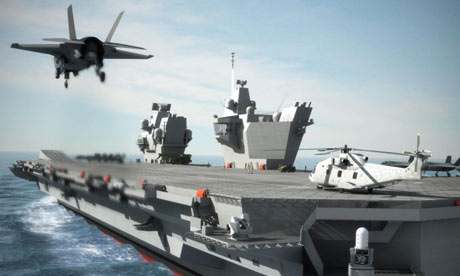 In the strategic defence and security review (SDSR),

to allow a version of the new Joint Strike Fighter (JSF) to be catapulted from the decks and caught by arrestor wires on landing.

But the Guardian has been told the cost of the modification has spiralled out of control,