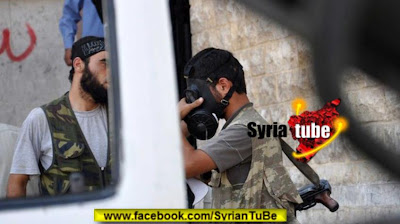 Images: FSA fighters, one on the left wearing a “Jihadist” headband, another on the right trying on a military-grade gas mask,

were reportedly photographed in Aleppo, Syria.

Many Syrians and outside observers alike,

fear that NATO-backed militants may deploy chemical weapons in one or more locations around Syria,

to subsequently be blamed on the Assad government

– faithfully reprinted without analysis  from The (pro-war) London Times

The FSA are refered to in Western press as  ‘Activists’

and not as ‘Militants’ or ‘Terrorists’ ]

has already been conducting strings of devastating, indiscriminate mass-casualty bombings across the country,

Foreign weapons, cash, and fighters have also all been confirmed to have made it into Syria

in an effort to undermine, divide and destroy Syria.

Sat Jul 28 , 2012
https://www.youtube.com/watch?v=Y0DlF3Ybwnk Binary Economics is really a modern Islamic Democratic market private property economics alternative to fiat money What matters is who makes the creation of Fiat money Producers and consumers must be the same people if there is to be balance and just outcomes. Therefore everyone must be enabled to […]