Russian President Vladimir Putin on Monday suspended a treaty with Washington on cleaning up weapons-grade plutonium, signaling he is willing to use nuclear disarmament as a new bargaining chip in disputes with the United States over Ukraine and Syria. 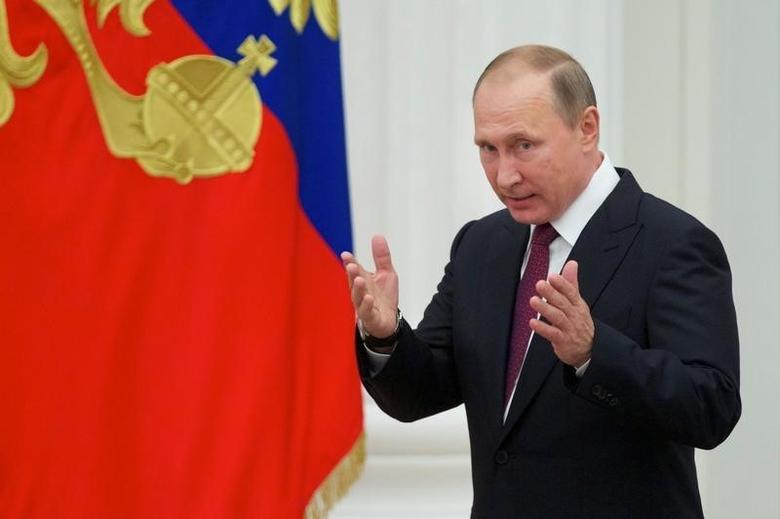 Starting in the last years of the Cold War, Russia and the United States signed a series of accords to reduce the size of their nuclear arsenals, agreements that have so far survived intact despite a souring of U.S.-Russian relations under Putin.

But on Monday, Putin issued a decree suspending an agreement, concluded in 2000, which bound the two sides to dispose of surplus plutonium originally intended for use in nuclear weapons.

The Kremlin said it was taking that action in response to unfriendly acts by Washington. It made the announcement shortly before Washington said it was suspending talks with Russia on trying to end the violence in Syria.

The plutonium accord is not the cornerstone of post-Cold War U.S.-Russia disarmament, and the practical implications from the suspension will be limited. But the suspension, and the linkage to disagreements on other issues, carries powerful symbolism.

Putin’s decree could signal that other nuclear disarmament cooperation deals between the United States and Russia are at risk of being undermined,” Stratfor, a U.S.-based consultancy, said in a commentary.

“The decision is likely an attempt to convey to Washington the price of cutting off dialogue on Syria and other issues.”

U.S. State Department spokesman John Kirby said in a statement on Monday that bilateral contacts with Moscow over Syria were being suspended. Kirby said Russia had failed to live up to its commitments under a ceasefire agreement.

Western diplomats say an end to the Syria talks leaves Moscow free to pursue its military operation in support of Syrian President Bashar al-Assad, but without a way to disentangle itself from a conflict which shows no sign of ending.

Russia and the United States are also at loggerheads over Ukraine. Washington, along with Europe, imposed sanctions on Russia after it annexed Ukraine’s Crimea region in 2014 and backed pro-Moscow rebels in eastern Ukraine.

Putin submitted a draft law to parliament setting out under what conditions work under the plutonium accord could be resumed. Those conditions were a laundry list of Russian grievances towards the United States.

They included Washington lifting the sanctions imposed on Russia over Ukraine, paying compensation to Moscow for the sanctions, and reducing the U.S. military presence in NATO member state in eastern Europe to the levels they were 16 years ago.

The Obama administration has done everything in its power to destroy the atmosphere of trust which could have encouraged cooperation,” the Russian foreign ministry said in a statement on the treaty’s suspension.

“The step Russia has been forced to take is not intended to worsen relations with the United States. We want Washington to understand that you cannot, with one hand, introduce sanctions against us where it can be done fairly painlessly for the Americans, and with the other hand continue selective cooperation in areas where it suits them.”

The 2010 agreement, signed by Russian Foreign Minister Sergei Lavrov and then-U.S. Secretary of State Hillary Clinton, called on each side to dispose of 34 tonnes of plutonium by burning it in nuclear reactors.

Clinton said at the time that there was enough of the material to make almost 17,000 nuclear weapons. Both sides back then viewed the deal as a sign of increased cooperation between the two former Cold War adversaries.

Russian officials alleged on Monday that Washington had failed to honor its side of the agreement. The Kremlin decree stated that, despite the suspension, Russia’s surplus weapons-grade plutonium would not be put to military use.

Thu Oct 6 , 2016
Coupled with the multitude of “coincidences” and the HAARP charts, this leaked Clinton Email, found by CONTrail member Trillion, is a real piece of smoking gun evidence that the February 22 earthquake in Christchurch was either engineered or at least precisely predicted. https://thecontrail.com/profiles/blogs/smoking-gun-for-christchurch-killer-quake