It was a scene straight out of the Godfather as US Vice President Joe Biden arrived in Turkey to announce that we would directly support NATO member Turkey’s incursion into northern Syria, while in July Turkey’s President Erdoğan barely survived a military coup, which is widely believed to have enjoyed US support. Biden’s reversal was at the same time a double-cross of the Kurdish forces which the US had promoted as its proxies in the Syria conflict. This brings to mind a famous scene in Francis Ford Coppola’s The Godfather, where Michael reassures his crime family before assassinating a police captain ~ “It’s not personal, it’s strictly business.”: Allen L Roland, PhD

In a classic example of American Foreign policy, whose moral integrity greatly resembles a Kissinger inspired American crime family ~ we literally threw Turkey’s president Erdoğan under the bus with a thinly disguised US supported coup and then rapidly shifted gears once the coup obviously failed.  However, the failed coup was seemingly supported by the CIA, with the failure also being coordinated with President Erdogan ~ thus making it an intelligence op which was meant to fail and mislead public opinion which it most certainly did. Of course, the real objective is Iran ~ in that regard ~ as Michel Chossudovsky states ~ US military policy consists of creating conditions  for America’s staunchest allies (Turkey, Saudi Arabia, Israel) to confront Iran, and act indirectly on behalf of US interests and “do the job for us”.

“The Godfather is, indeed, an appropriate reference point for a discussion of the planning and execution of US foreign policy. Its global operations are directed by a cabal of intelligence agents, acting in the interests of the financial and corporate elite, whose operations have an essentially conspiratorial and criminal character. Outside of and beyond any democratically controlled decision-making, these forces overturn governments and start wars to further the sordid commercial and geo-political aims of American imperialism” as Biden essentially told Erdoğan” “don’t take our recent actions personally, it’s strictly Business“.

Which brings us to our business which is essentially War, Drone assassinations, Regime change and Weapon sales as part of an out-of-control Military/Industrial/Congressional complex ~ all operating under the cloak of American exceptionalism.

WSWS elaborates; “Thirteen years after the invasion of Iraq, which resulted in the deaths of at least a million people, some 4.4 million Iraqis are internally displaced, with over a quarter million forced to flee the country. Questions of foreign policy are not decided, much less deliberated, within the framework of elections. Nowhere in the 2016 presidential race is there a serious debate, for instance, on the character of the US alliance with Turkey or the consequences of launching a de facto NATO invasion of Syria. Congress holds no hearings or votes. It neither seeks nor desires to play a serious role.”

The only anti-war peace candidate still standing is Jill Stein who most likely will be denied a place at the Presidential debates and is now marginalized to a lone voice in the impending political darkness. Note in 1988, Democrats and Republicans teamed up to create a corporation called the Commission on Presidential Debates. They set out to deceive Americans by using an official-sounding word like “commission” in their name. The League of Women Voters immediately withdrew its sponsorship of the presidential debates because the demands of the establishment parties would ~ in its own words ~ “perpetrate a fraud on the American voter.”

We are obviously almost beyond the moral point of no return as WSWS explains; “The launching of a NATO invasion of the Syrian war zone brings ever closer a direct clash with nuclear-armed Russia, which is militarily supporting the Damascus regime ~ Nobody should believe that the criminal cabal that runs US foreign policy will proceed with any more deliberation or caution in launching a war whose body count will be in the hundreds of millions, if not billions, than it does in plotting wars in which “mere” millions of lives are squandered.”    See WSWS article ~ 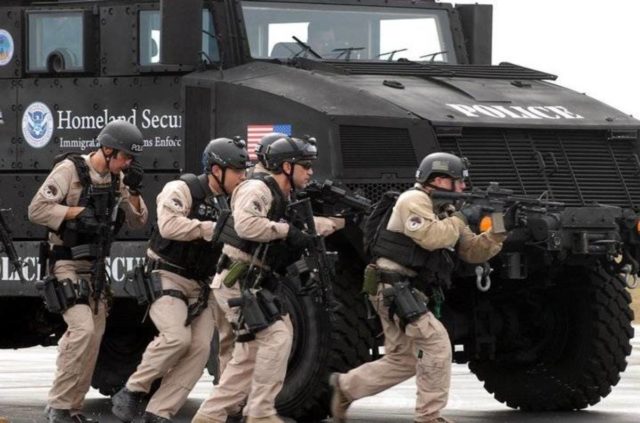 Our political leaders are all apparently committed to war, especially Hillary Clinton, and we as a nation have become a total security police state immersed in apathy and fear as the 15th anniversary of 9/11 draws near.

This thinly disguised New World Order committed to Military might was obvious in Hillary’s recent speech to the American Legion convention last Wednesday as reported by WSWS ~  ” Hillary Clinton’s speech to the American Legion convention Wednesday was a full-throated declaration of the right and responsibility of the United States to control the world by military force. Clinton pledged to keep the US the dominant global military power, to uphold the military alliances through which US imperialism controls Europe and the Far East, and to wage war unilaterally if deemed necessary, regardless of world opinion”   See article

Gordon Duff,  senior editor Veterans Today sums it up our current state of national apathy where evil has thrust its eager hand ~  “America is much more than a police state and far more a “total surveillance state” than even the harshest critics imagine.”

Duff elaborates;  “What we are saying is this, a monstrosity beyond imagination is there already, waiting to be triggered, one beyond party politics, beyond the concerns of religion or ethnicity.

During seven years of the Obama presidency, something happened that is not being discussed, not even by Obama’s political enemies. Bush era clamp downs on individual freedom after 9/11 have been not only carried forward, but have been pushed on to levels unimagined.

That this was done under a liberal democratic president is unthinkable. Even more unthinkable, however is that Obama’s political enemies not only don’t think he went far enough, they are attacking Donald Trump as well for being, and this is the truth of it, “weak on tyranny and dictatorship.”

Evil has indeed slipped its hand into our protective glove of national apathy ~ for the criminal cabal that controls US foreign policy and its wars cannot be stopped until we, the people, realize that this strictly criminal business as usual approach has become deeply personal; that the war machine no longer serves us, and that peace begins with each one of us ~ much like my first anti-war 1970 bumper sticker proudly proclaimed ~  PEACE BEGINS WITH ME.

“The day the power of love overrules the love of power, the world will know peace.”  ~ Mahatma Gandhi

Heart centered spiritual consultant and advisor Allen L Roland can be contacted at allen@allenroland.com Allen is also a lecturer and writer who shares a weekly political and social commentary on his web log and website allenroland.com. He is also featured columnist on Veterans Today and is a featured guest on many radio and Television programs