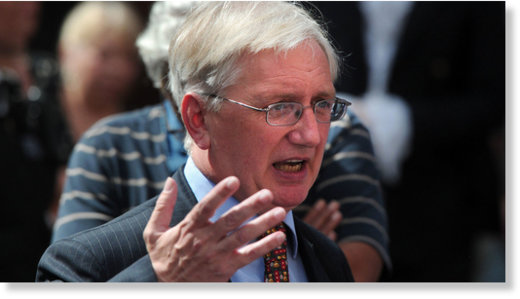 The US intelligence report on alleged Russian interference in the 2016 election is uncritically supported by the same media which was biased in favor of Hillary Clinton during the campaign, WikiLeaks associate Craig Murray told RT.

The former British ambassador to Uzbekistan, and a self-proclaimed recipient of Podesta emails, which he said were received from a Democratic Party insider, called the report released on Friday by the Office of the Director of National Intelligence ‘hilarious’ and ‘devoid of evidence.’

“When I saw the report the other night I genuinely believed that was The Daily Mash or some other humorous site that had done a spoof. It seems such a mockery of what we’ve had, which is weeks and weeks of assertion without evidence. And it was so totally devoid of evidence, that I thought it must be a joke,” he told RT.

He added that the report failed to cite any factual evidence “because the assertions it is making are factually untrue.”

Murray believes that the report is full of “illogical assertions built on nothing.”

“The report asserts, for example, that President Putin must have ordered the hacking. It doesn’t say that the hacking of the election or influencing actually happened. But it says: ‘If it happened, he must have ordered it.’ And as evidence, it gives the fact that after the election, Russia did not question the validity of the election process and that it in some way supposes that Putin ordered that the process be hacked. It is nonsense,” Murray explained.

He also lambasted the document for making RT the centerpiece of the alleged Russian effort to undermine American democracy.

“[The report] makes it seem illegitimate and wrong for a media organization to broadcast any information that doesn’t go along with the American government’s wishes. One example is that the report states that RT broadcast a program critical of fracking, and that it proves that RT was setting up to undermine the American economy,” he said.

“That’s an astonishing assertion. There are millions of Americans, who are against fracking! It’s a blatant attack on the freedom of the press and an attempt to limit the area of legitimate debate.”

He criticized Western mainstream media for accepting the report uncritically instead of independently confirming the statements contained in it, like proper journalists are supposed to do. He said this trend was “extremely worrying.”

“They could only put out such a bad report with no evidence to back it up if they were already certain that the mainstream media would report it, support it, and not investigate it,” Murray remarked.

“The trouble is the Western mainstream media have very few journalists anymore. They are just stenographers who type out the neocon narrative and don’t question the official line. Nobody of any intelligence could have read this report and believed it. Almost certainly the MSM journalists, who are supporting the report, have only read some of it at the start and have not actually read through the thing.

“One of the points in the report is that it criticizes RT for saying that the mainstream media were biased in favor of Hillary Clinton during the US presidential election. That’s simply true. It’s like saying ‘the sky is blue.’ There was no doubt whatsoever where the bias laid. And now we see that the same mainstream media’s… coming out to support this report and destabilize the incoming president,” Murray concluded

Trump To Diplomats: "You're Fired!"