President-elect Donald Trump blasted outgoing CIA Director John Brennan on social media Sunday after Brennan said Trump does not have a “full understanding” of Russia’s power and threat to the world.

“I don’t think he has a full understanding of Russian capabilities and the actions they are taking on the world,” Brennan told “Fox News Sunday.”

He also suggested that Trump lacks a “full appreciation” of Russia’s aggression or about why President Obama imposed sanctions on the Kremlin for meddling in the 2016 presidential election.

“Mr. Trump has to understand that absolving Russia is a road that he needs to be very, very careful about moving down,” Brennan said.

Trump responded with a two-tweet message that criticized the CIA’s record under Brennan and questioned whether the director had leaked a dossier of unverified allegations that Russia spies had obtained compromising personal and financial information about Trump. 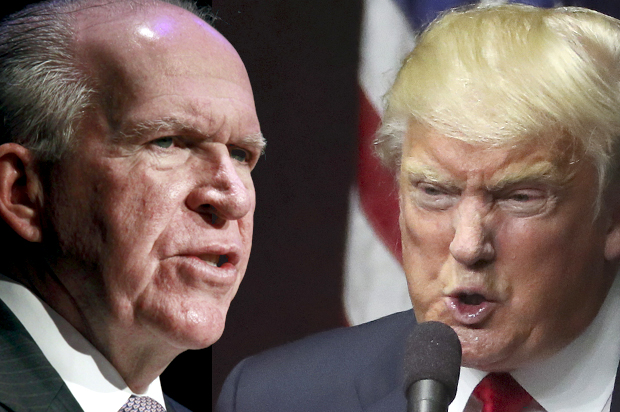 The day after the dossier’s contents were published by BuzzFeed, Trump posted on Twitter that intelligence agencies “should never have allowed this fake news to ‘leak'” before asking “Are we living in Nazi Germany?”

Trump has repeatedly hoped for better U.S. ties with Russian President Vladimir Putin, and he has been particularly suspicious of the entire U.S. intelligence community since it concluded Russia and Putin tried to influence the elections, in an apparent effort to help Trump defeat Democratic presidential nominee Hillary Clinton.

Brennan said Trump likening the U.S. intelligence community to Nazi Germany for presumably leaking the content of an opposition-research dossier on him is “outrageous.”

“There is no interest in undermining the president elect,” he said. “Our responsibility is to understand dangers on the world stage so (Trump and his Republican administration) have the intel we have so they can make the best decision.”

However, he said Trump “needs to be disciplined” and that he’ll face numerous challenges” in his presidency that begins Friday — with terrorism, cybersecurity, North Korea and Middle East instability among those at the top.

“So many issues on Day One,” said Brennan, who President Obama appointed to lead the CIA in 2013.

It's The Final Takedown....