Washington (CNN)President Donald Trump’s immigration executive order set off mass confusion at airports and even the agencies in charge of implementing it.

One key question for many is how the order will affect US green card holders and people who hold dual citizenship with a Trump approved country and one of the seven banned nations.
Adding to the confusion, Trump administration officials seemed to at times contradict themselves during appearances on Sunday news shows. In mere minutes during an interview with NBC, White House chief of staff Reince Priebus said the order “doesn’t affect” green card holders, then later said “of course” it affects green card holders from Iran, Iraq, Syria, Sudan, Libya, Yemen and Somalia — the seven countries Trump has temporarily stop immigration from for 90 days. 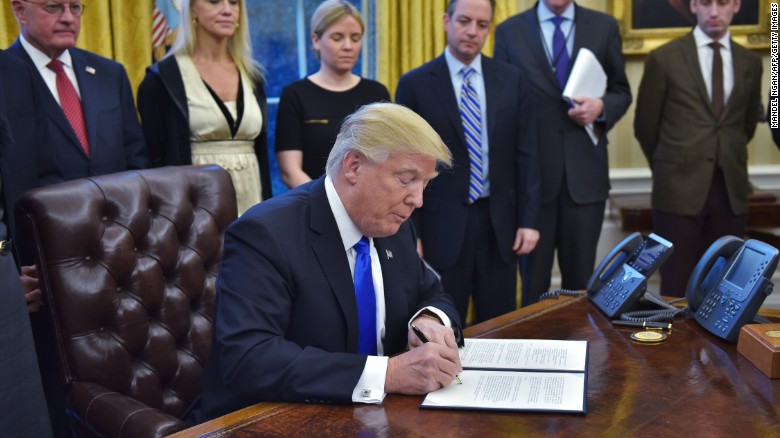 Inside the confusion of the Trump executive order and travel ban
Trump on Sunday defended his recent executive order on extreme vetting, saying in a statement: “We will continue to show compassion to those fleeing oppression, but we will do while protecting our own citizens and voters.”
He added: “This is not a Muslim ban, as the media is falsely reporting. This is not about religion — this is about terror and keeping our country safe.”
He said his first priority “will always be to protect and serve our country, but as President I will find ways to help all of those who are suffering.”
But a top GOP senator, citing green card holders in particular, called on Trump to revise portions of the order.
“We all share a desire to protect the American people, but this executive order has been poorly implemented, especially with respect to green card holders,” Senate Foreign Relations Chairman Bob Corker said Sunday. “The administration should immediately make appropriate revisions, and it is my hope that following a thorough review and implementation of security enhancements that many of these programs will be improved and reinstated.”
Later Sunday, Homeland Security Secretary John Kelly issued a statement clarifying their status saying “lawful permanent resident status will be a dispositive factor in our case-by-case determinations.”
Another Homeland Security official told CNN the green card holders who are returning to the US will still go through additional screening and national security checks upon landing. However, the government is trying to ease their entry back into the US. Unless they have a significant criminal history or links to terrorism, they will be allowed back in the country after going the check the official said.
“This is our message to them: get on a plane. Come back to the US. You will be subject to secondary screening, but everything else will be normal,” the Homeland Security official told CNN.
A White House official said Sunday more than 170 green card holders had been waived in as of 3 p.m.
Here is what we know about how Trump’s order impacts green card holders and dual citizens:

Senior officials at the Department of Homeland Security initially interpreted Trump’s order to not apply to green card holders from the seven banned countries. Trump White House overruled that reading, however, meaning those green card holders were initially barred.
But a federal judge in New York temporarily blocked part of Trump’s order late on Saturday night, ruling that citizens of the seven countries who hold valid visas and have already arrived in the United States cannot be removed from the United States.

A Key Clue To Trump's Presidency, By Jon Rappoport