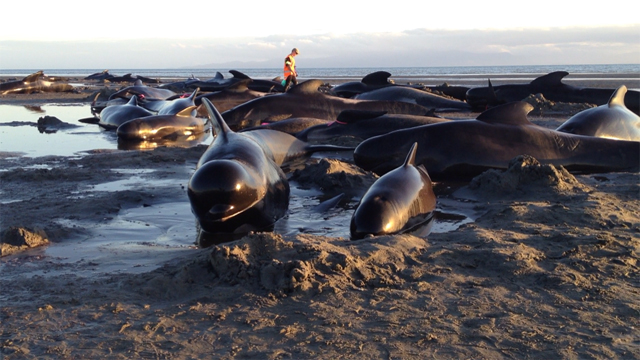 Experts and an army of volunteers spent Friday morning fighting to keep surviving whales alive after more than 400 of them beached themselves at Farewell Spit in Golden Bay. They managed to refloat the survivors, but now have to wait and see if the whales will beach themselves again.

Can you see the stranding? Send your newstips, photos and video to newstips@stuff.co.nz The view from the air shows the overwhelming scale of the stranding.

DOC Golden Bay operations manager Andrew Lamason said latest reports were that an estimated 70 per cent of the 416 whales had died overnight.

Early in the morning, the focus turned to keeping the remaining whales alive until high tide at 10.30am.

By 11am, Golden Bay operations manager Andrew Lamason said they’d successfully refloated the surviving whales, but there were concerns they might restrand.

“What they’re doing is milling around so we won’t know until mid-afternoon whether we’re going to have a restranding or not,” Lamason said.

of this item and videos here:

I WILL BE ADDING TO THIS ITEM AS THINGS PROGRESS, AND NOTE THAT SEISMIC BLASTING IS APPARENTLY CURRENTLY TAKING PLACE IN THE AREA.

FROM Rose at The Con Trail:

Stranded No More 416 (!!!!) Pilot whales, 75 % dead, the rest will be refloated by Project Jonah which could be pointless if the seismic survey is still active. We are still checking on the vessel.
35 mins

Stranded No More Possible seismic survey by the Amazon Warrior in the area, we are checking
I just checked, Amazon Warrior is currently leaving the area at 12.45pm as I type this
https://www.enautical.co.nz/amazon-warrior-ship-tracking/
Added at 11.30pm:
Volunteers at the stranding scene, pics by Saru G

the rescue effort continues, more pics Thanks to Saru and Rose

UPDATE, 6PM 11 Feb. ANOTHER STRANDING OF 180 WHALEIS BEING  REPORTED.
SEEMS TO BE NO END TO THIS HORROR!
https://www.stuff.co.nz/national/89303624/surviving-whales-to-be-left-alone-overnight