Tunnel collapses at Hanford nuclear waste site in US

Staff at the Hanford nuclear waste site, 300 kilometres south east of Seattle, have been ordered to “take cover” after a portion of a tunnel contaminated with radioactive materials appeared to collapse. News sites in the US are reporting a portion of a storage tunnel that contains rail cars full of radioactive waste has collapsed forcing an emergency declaration at the Hanford Nuclear Reservation in southeastern Washington state. We talk to our US correspondent.

Hundreds of workers at the Hanford nuclear waste site in the US state of Washington have been ordered to “take cover” after a tunnel, containing radioactive material and contaminated trains, partially collapsed.

The US Department of Energy said it has activated its emergency operations protocol in Hanford, a small agricultural community in south-central Washington, about 320km from Seattle. It came after an alert at the 200 East Area, which is home to numerous solid waste sites.

The US Department of Energy said the Tuesday collapse (Wednesday, NZ time) covered about 37 square metres instead of the 1.4sqm first reported at the Hanford Nuclear Reservation.

It was discovered during “routine surveillance”, according to the Energy Department.

The tunnel is next to the Plutonium Uranium Extraction Facility, also known as Purex. Workers near the facility were told to shelter in-place and access to the area was restricted, the Energy Department statement said.

The two tunnels are each hundreds of metres long and buried beneath about 2.4m of soil, according to the Energy Department, which added “the depth of the subsidence of soil [between 50cm and 1.2m] appears to be into the tunnel”. 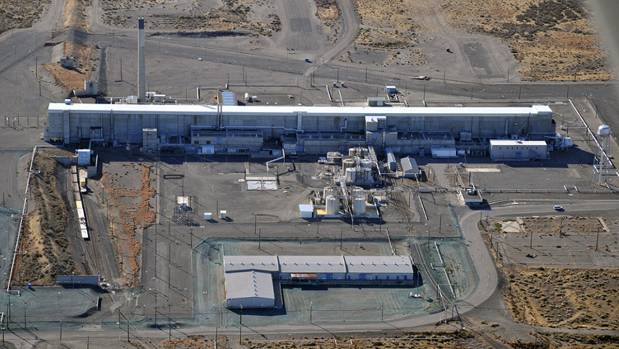 The Purex (Plutonium Uranium Extraction Plant) separations facility at the Hanford Works is seen in an undated aerial photo. The building has been vacant for nearly 20 years but remains highly contaminated. A tunnel collapse at the Hanford site has sparked an emergency.

Officials said there was “no indication of a release of contamination at this point” but that emergency crews were still testing the area for contamination.

Former Energy Department official Robert Alvarez said rail cars carry spent fuel from a reactor area along the river to the chemical processing facility, which then extracts dangerous plutonium and uranium. He said the plant lies near the middle of the sprawling Hanford site and was “a very high hazard operation”. Many contaminated pieces of equipment, including the rail cars, have been left in the tunnels, he said.

Alvarez, a former Energy Department official, cited a 1997 report, which said that the tunnel was 109.1m long, 6.7m high and 5.9m wide. First constructed decades ago, the walls of the older tunnel are 35cm thick and held up by pressure-treated Douglas fir timbers arranged side by side, the report said. They rest on reinforced concrete footings.

Tunnel is “full of highly contaminated materials such as hot radioactive trains that transport fuel rods,” & workers told not to eat, drink. https://t.co/2XI7rBr8X3

Cleaning up radioactive materials at the Hanford site, a federal facility, has been one of the Energy Department’s priorities for years. Reactors located at Hanford produced plutonium for America’s defence programme and uranium metal fuel for commercial reactors. Plutonium production ended in 1980 and the clean-up programme began. An unnamed source told NBC affiliate King workers may have created a vibration that caused a nearby tunnel filled with highly contaminated material to collapse.

Although the Trump administration has vowed to slash the budgets of most Energy Department programmes, the administration does not plan to skimp on the department’s programme charged with the Hanford cleanup and with other nuclear sites.It has requested US$6.5 billion (NZ$9.43b) for agency’s environmental management programme for 2018.

The budget for Hanford alone is about US$2.3b in the current fiscal year, about US$1.5b of that going to the management and treatment of approximately 211m litres of radioactive liquid waste currently stored in underground storage tanks.

The 1295sqkm Hanford reservation was established by the Manhattan Project during World War II to make plutonium, a key ingredient in nuclear weapons. Hanford made the plutonium for the atomic bomb that was dropped on Nagasaki, Japan, and much of the plutonium for the nation’s nuclear arsenal. It is located about 321km southeast of Seattle and is half the size of Rhode Island.

WHERE DID THE ACCIDENT HAPPEN?

The mishap occurred atop one of two rail tunnels under a plant located in the middle of the Hanford site. The Energy Department said soil collapsed 50cm to 1.2m over a 37sqm area. The agency says the rail tunnels are hundreds of metres long, with about 2.4m of soil covering them.

WHAT WASTE IS STORED AT HANFORD?

The area contains about 211.98 million litres of radioactive waste, most of it in 177 underground tanks.

HAVE THERE BEEN SAFETY ISSUES BEFORE?

Ferguson says that since the early 1980s, hundreds of workers have been exposed to vapors escaping from nuclear waste storage tanks and that those breathing the vapors developed nosebleeds, chest and lung pain, headaches, coughing, sore throats, irritated eyes and difficulty breathing.

Lawyers for the Energy Department have said no evidence has been provided showing workers have been harmed by vapors.

HOW LONG WILL IT TAKE TO CLEAN UP THE ENTIRE FACILITY?

The latest estimate to finish the overall cleanup of Hanford is more than US$107 billion (NZ$155bn) and the work would take until 2060. The Energy Department in recent years has spent about US$2 billion a year on cleanup work.