Jared Kushner: The young, well spoken, impeccably groomed son-in-law seems to be unstoppable in his rise to prominence. I mark him as a man to watch very closely. There is certain to be speculation and controversy galore with this man!
FROM REUTERS:
By Luke Baker | JERUSALEM

Kushner, a 36-year-old real estate developer with little experience of international diplomacy or political negotiation, arrived in Israel on Wednesday morning and was due to spend barely 20 hours on the ground.

Video showed him giving Israeli Prime Minister Benjamin Netanyahu, a friend of Kushner’s father, a handshake and a hug as they prepared to sit down with the Israeli ambassador to Washington, the U.S. ambassador to Israel and other senior officials for preliminary discussions.

“This is an opportunity to pursue our common goals of security, prosperity and peace,” Netanyahu said. “Jared, I welcome you here in that spirit. I know of your efforts, the president’s efforts, and I look forward to working with you to achieve these common goals.”

Kushner replied: “The president sends his best regards and it’s an honor to be here with you.”

Kushner did not speak to the media or take questions, maintaining the circumspect profile he has established since Trump took office in January.

U.S. officials and Israeli leaders “underscored that forging peace will take time and stressed the importance of doing everything possible to create an environment conducive to peacemaking,” the White House later said in a statement. 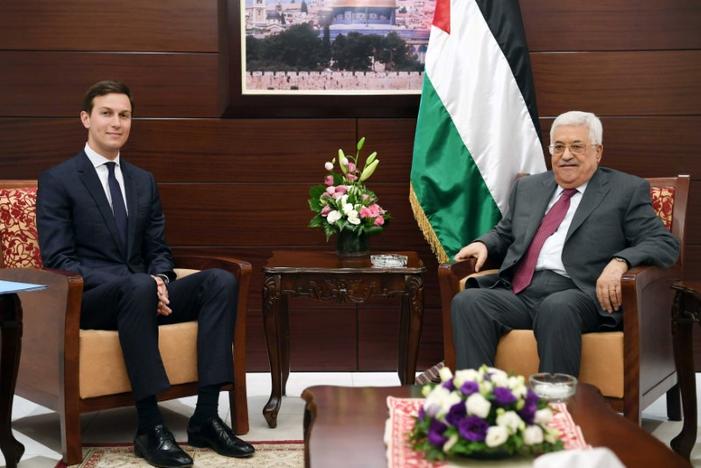 Kushner traveled to Ramallah, in the Israeli-occupied West Bank, for two hours of talks with Palestinian President Mahmoud Abbas after iftar, the evening meal that breaks the daily Ramadan fast.

Abbas spokesman Nabil Abu Rdainah said all major issues at the heart of the conflict were discussed.

U.S. officials called the trip part of an effort to keep the conversation going rather than the launching of a new phase in the peace process, saying that Kushner and Jason Greenblatt, the president’s special representative for international negotiations, are likely to return often.

Trump has described peace between the Israelis and the Palestinians as “the ultimate deal” and made it a priority. As well as receiving both Netanyahu and Abbas in the White House, he visited the region last month.

But it remains unclear what approach Trump, via Kushner and Greenblatt, plans to take on resolving one of the world’s most intractable conflicts.

For at least two decades, the goal of U.S.-led diplomacy has been a “two-state solution”, meaning an independent Palestinian state living side-by-side and at peace with Israel.

But when Trump met Netanyahu in Washington in February, he said he was not fixed on two states saying, “I’m looking at two-state and one-state, and I like the one that both parties like”.

Netanyahu has in the past given conditional backing to two states. But ahead of his last election victory in 2015, he promised there would never be a Palestinian state on his watch, a remark seen as an attempt to shore up right-wing support.

In discussions with Greenblatt before Kushner’s visit, Palestinian sources said the phrase “two-state solution” had not been used.

Palestinian sources said that ahead of Kushner’s meeting with Abbas, they had been asked to draw up a list of 12 “bullet point” demands they would want met in any negotiations.

They saw it as a helpful exercise in focusing on core elements rather than an oversimplification of a complex issue.

Trump administration officials have said that if they are going to make progress on peace, they do not want to get bogged down in process but to move rapidly on tackling what are known as “final status” issues, the complexities around Jerusalem, Palestinian refugees, water resources, security and borders.

Those have long been thorny problems in the multiple rounds of peace negotiations launched by both Republican and Democratic presidents since the mid-1990s. It remains unclear what new approach Trump’s administration may have to untangling disputes that blend politics, land, religion and ethnicity and have defied resolution for 70 years.

AND FOR A DIFFERENT PERSPECTIVE:

Even before Benjamin Netanyahu locked him in a warm embrace, Jared Kushner began his effort to broker peace between the Israelis and the Palestinians by making it clear that he completely accepts Israel’s vision of itself as an innocent victim.

That’s because Kushner started his 15-hour trip to the Middle East on Wednesday by mourning with the family of an Israeli police officer, Hadas Malka, who was killed by a Palestinian assailant in East Jerusalem on Friday.

Since her death, Israelis have been outraged over the murder of Malka, who was a member of the border police force charged with maintaining Israeli control in the Old City of Jerusalem, one of the Palestinian territories occupied by Israel since 1967.

Jared Kushner: “There Is Something Very Strange About This Man”: Video

The new Saudi crown prince "is good news for the US"